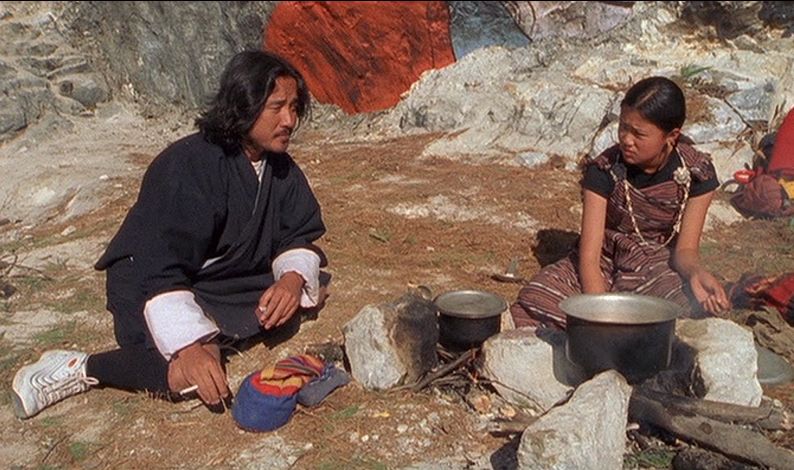 Much of what I’ve explored in the short time that I’ve been writing this column have been film industries with long and rich histories operating in markets with limited funding or destroyed by oppressive political regimes. Even the smaller Asian cinema markets tend to date back to at least the 60s, with many having output going back to the origins of film. Cinema in Bhutan is something of an outlier in that its film industry is still virtually brand new.

Bhutan is a tiny landlocked nation, positioned right beside Bangladesh and India, two of Southeast Asia’s most productive film markets. Historically, the nation has been ultra-conservative and ruled by an absolute monarchy which banned film and television in the nation until 1999. Bhutan had its first elections only a decade ago and still operates as a parliamentary monarchy. Today, the country’s film output remains small and the number of screens in Bhutan remains in the single digits.

The message of modern Bhutanese film is overwhelmingly influenced by the religious conservatism of the nation. Tibetan Buddhism is a constant theme of Bhutanese movies and much output is still focused on retelling the folklore with which most of the populace is familiar. This is a pattern which is noted in the early films of many Southeast Asian countries and it’s interesting to see it unfold in real time rather than reflect on it as we might for any of the nations that put out these sorts of films in the mid-20th century.

One such movie is Milarepa, a 2006 film directed by Neten Chokling. The film tells the story of the titular Milarepa, a legendary mystic in Bhutanese folklore. The legend states that Milarepa was instructed in sorcery and mysticism after his family stole the fortune left to him by his wealthy father. When he used his magical powers to destroy his village, he quickly came to regret the death and destruction he wrought in his quest for vengeance. The film covered these events, and there was a planned sequel slated to come out in 2009 that would’ve covered the rest of Milarepa’s life, but it does not seem that the project came to fruition. 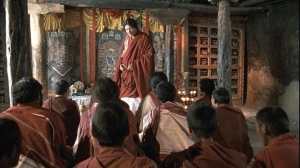 Milarepa is not a cinematic masterpiece, but it does display some fascinating surrealist imagery. Watching Milarepa get in touch with his mystical powers is accompanied by a borderline Brakhagian sequence which references Buddhist spiritualism. In the final portion of the film, when Milarepa returns home to get his revenge, the movie displays surprisingly adept disaster special effects alongside an exciting climax.

Bhutan has also seen some entirely original storytelling. Travelers and Magicians, a 2003 film directed by Khyentse Norbu, was the first film to be shot entirely in Bhutan. It tells the story of a young man named Dondup (Tshewang Dendup) who is eager to flee his village to seek opportunity in America. After receiving word from a connection with the local American consulate that he has a chance to reach America if he can get to Thimpu (the capital of Bhutan) in two days, he sets out to hitchhike his way into town.

Along the way he encounters a young monk, an elderly man on his way to sell a batch of fresh apples, and a paper maker and his daughter from Dondup’s own village. The monk frequently pokes fun at Dondup and his quest for America, and the film does play with a strong sense of humor as Dondup spends the entire run time wearing a comically on-message “I love New York” shirt. The story of their travels is broken up with a story that the monk tells the group about a young man who is separated from his village and is stranded in the middle of the forest with an elderly man and his young wife. When the boy falls in love with and impregnates the man’s wife, they discuss drastic steps they might take to get away from the old man. Like Milarepa, this sequence of Travelers and Magicians is illustrated through images inspired by Tibetan Buddhist mysticism and again displays surprisingly competent special effects given the small budget available. One sequence in particular, when the boy is first taken from his home on a horse that he’s unable to control, is actually pretty terrifying as he is drawn deeper into the dark and unknown and the weather turns sour around him. 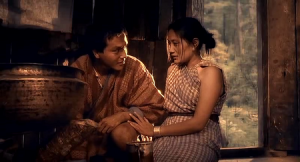 Travelers and Magicians shows great tenderness for Bhutanese culture. At the heart of its message, it is a reminder of both the cultural heritage from which Bhutan has emerged and the possibilities that lie in the future of its collective youth if they choose to stay and bring the innovation that the nation so desperately craves. An interesting dichotomy is formed between Dondup and the paper maker’s daughter Sonam (Sonam Lhamo). While Dondup is idealistic and ready to leave his native land, Sonam is familial and holds strongly to her roots in Bhutanese tradition. The two are around the same age and the hints of a romance are displayed throughout, while the disparities between their worldviews underscore conflicting sentiments in Bhutan: the value of its historical heritage and the overwhelming feeling that the rest of the world is passing it by. Neither belief truly wins out in the end, though the film does offer a hopeful sense that Bhutan might be prepared to evolve with its energized youth.

The position of Bhutanese cinema is still unestablished as the industry is only about twenty five years old. With the economy finally emerging from under the shadow of an overbearing government, perhaps we will see exciting and innovative world cinema begin to come out of the tiny nation. It is impossible to say what direction this cinema will take as it is still in its early years, but seeing a new film industry emerge in the 21st century is undoubtedly an exciting prospect.