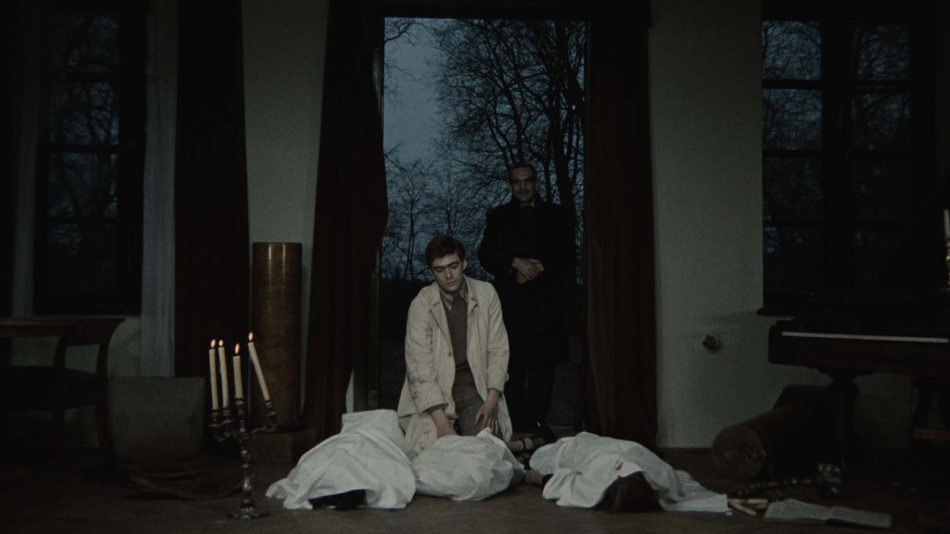 Andrzej Żuławski has always cultivated somewhat of a niche audience, and reasonably so. Few filmmakers are as grotesque, reveling in constant frenzy, all the while managing to balance unhinged antics and contemplation. Żuławski’s worlds are messy and often feel lost in their own making; his mise-en-scène is absurdly frenetic to the point where many scenes and shots border on irreconcilability. To describe his films as nightmarish is an understatement and “weird” doesn’t even begin to scratch the surface. And yet, for better or worse, that manic eccentricity is precisely the appeal — even if it comes at the expense of accessibility.

Most cinephiles will cite Possession — Żuławski’s English-language cult horror film (and only non-obscure feature) — as the best introduction to the Polish auteur’s daunting style. These individuals neglect a crucial and sorely overlooked film in his oeuvre, one that is every bit as outrageous and unnerving as the rest of his filmography. This is a film that also serves as the rare instance of a debut that presents a filmmaker whose recurring themes, style, and idiosyncrasies all seem to be honed and fully-realized from the get-go. Of course, this is none other than Żuławski’s directorial debut, 1971’s The Third Part of the Night.

Set to the backdrop of World War II amidst the German occupation of Poland, Third Night follows a man named Michal (Leszek Teleszyński) who witnesses the brutal murder of his wife, mother, and son at the hands of Nazi soldiers. With little left to lose, Michal attempts to join the city’s secret Polish resistance. However, this act is futile as the Gestapo intercept his first meeting, murdering the middleman, and chasing him through town. Michal evades this pursuit, but only by barging into the apartment of Marta (Małgorzata Braunek), a mysterious pregnant woman who happens to be going into labour. He helps her give birth, but not before the startling revelation that she appears to be a doppelganger of his dead wife.

Henceforth, Michal falls into a world outside of his own; government conspiracies unravel as cryptic figures from the past return, all while Michal remains inundated with paranoiac delusions of his wife and human doubles. Żuławski toys with several concepts here — textually, there are Nietzschean references and numerous biblical allegories — and he arguably bites off more than he can chew. This is a difficult film to describe due to how densely layered it is. Yet, for all of Żuławski’s musings, the film’s core allusions remain his most personal: at the center of Third Night is a conspiracy surrounding the obscure but true story of a Nazi vaccine laboratory that subjected Jews and Polish resistance fighters to experiments involving typhus — Żuławski’s father worked at the Weigl Institute, where many of these trials occurred.

These experiments involved participants strapping typhus-infected lice to their bodies to help produce a vaccine, often putting themselves at great risk for disease. Many resistance members would purposely volunteer since Nazi officials were ordered to avoid test subjects. In the film, Michal willingly volunteers to participate and serve as their guinea pig, acting as a metaphor for the times, but also providing a basis for much of the film’s horror. Third Night is framed as if it were a looming apocalyptic fever dream, Michal’s reality is disjointed and deceitful, becoming progressively worse as he continues the lice treatment. Doppelgangers and paranoia may be Żuławski’s main draw, but it all leads back to this spine-tingling laboratory. Additionally, while the film strives in presenting itself as a surrealist enigma, Michal’s descent can be interpreted as the side effects of these typhus-infected lice — the viewer simply observes the psychological breakdown of a broken man.

Regardless, any subtextual implications are secondary to Żuławski’s rich and textured world, one that is filled to the brim with minute details while laced with atmospheric dread. Perhaps what is most striking about Third Night is how it manages to provide insight into a wartime reality where every gesture, no matter how brief, carries an odor of distrust. Moreover, the film shines in its gruesome imagery; the overabundance of flesh-eating lice lends hand to excellent body horror, the caliber of which would make David Cronenberg blush. In fact, the early scene that depicts Marta’s labor may be one of the most graphic, vivid, and unrestrained depictions of childbirth ever put to the silver screen.

Żuławski’s craft cannot be understated: his trademarks are all here and quite complementary to the narrative. His energetic direction is present, uplifted by how he shot the film on a handheld camera, always moving at a kinetic and sporadic pace, instilling an unwavering sense of urgency. As always, the performances in a Żuławski film are intense and increasingly so to the point where they become ghoulish caricatures, staples of a nightmare. In Third Night, Michal and Marta largely constitute the human element of the film and their dynamic is emblematic of recurring themes within Żuławski’s work — particularly the decay of society and oneself, beginning at the familial unit (notably expanded on in Possession).

There is a great novelty to a film like The Third Part of the Night, Żuławski’s debut is more than ideal for any amateur filmmaker’s first feature; it overflows with creativity, ambition, and passion yet possesses the formal dexterity to harmonize each element while maintaining a singular style. Unfortunately, this is a film that has been buried by the sands of time. Apart from Żuławski fanatics, its presence in discussions regarding horror classics is practically nonexistent, which is a shame because it has aged tremendously well. While Żuławski’s style may initially appear overwhelming, The Third Part of the Night is an absolute gem of a film that warrants a watch from any horror fan.

1 comment on “Żuławski’s Unseen Debut: The Third Part of the Night”