David (Tim Roth) is a nurse for terminally ill patients. He treats each of his patients with care, assisting in feeding and bathing them. He cares deeply- although perhaps too much- for his patients, doing whatever it is they wish of him. He takes extra shifts whenever he deems the patient to need him. As a hobby, David jogs. This is the only time that he is in the frame by himself and scenes of him jogging are meditative for himself and for the viewer. 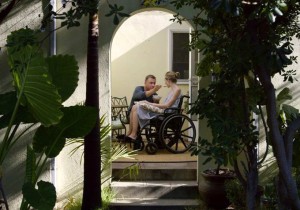 In his personal life, David comes across as an enigma. He is divorced from his wife (an explanation why is suggested in the film) and seems to have no friends. I wonder if he is unable to form long-lasting relationships with others or if he is simply dedicated to his job and has no extra time to spend with friends. He lies to strangers frequently, telling a bookstore owner he is an architect, but in fact one of his patients, John (Michael Cristofer), is an architect. Although he cares for John immensely and buys him a book relating to architecture that they can look at together, his lies remain unsettling. They ascribe characteristics of his patients onto himself. For David this could be his means for the patient to ‘live past their death’, but his lies relate to the next patient all too soon.

Chronic is a film that would have done well as a black comedy but only one scene comes across as ironic. It could have been a proficient drama but we are confused rather than sympathetic about the film’s protagonist. Or is the film meant to convey an existential standpoint? Chronic is a mystery of a film for certain, although clarity would have greatly benefited Michel Franco’s film.