Embrace of the Serpent follows two parallel stories of scientists Theo (Jan Bijvoet) and Evan (Brionne Davis), and their research in the Amazon rainforests of Colombia forty years apart. Each was in search of a rare plant called the yakruna, and each is guided by Karamakate (Nilbio Torres, Antonio Bolivar), the lone survivor from his native tribe. Theo seeks the plant to cure his illness, while Evan looks for scientific enlightenment. The true protagonist of the film, however, is not either of the researchers, nor the dual sides of Karamakate, but is in fact the jungle itself. Ciro Guerra emphasizes the importance of the natural environment thematically and visually. The beauty of the landscape provides an enchanting setting, but the dynamic nature of the plants and animals lends a personality to the environment. When Evan tells an elderly Karamakate, “I’ve devoted my life to plants” the wise old man tells him that it is the “most reasonable thing” he has ever heard from a white man. 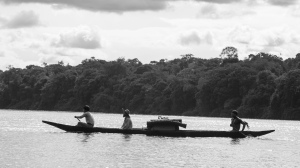 Throughout the film, Guerra engages the audience by bringing the viewer into the mind of the natives. The audience sees lines drawn between Theo and Evan that even Karamakate may not see, as his memory seems to fail him at times. The dynamic camera work, embracing the natural surroundings, creates a companionship between the viewer and the forest that enhances the sorrow of seeing it and its people exploited. Beautifully photographed by cinematographer David Gallego, the natural setting is the source of the emotional connection the viewer makes with the film. This creates an unusual atmosphere, as it prevents the viewer from ever needing to deeply connect with a character’s backstory.

The greatest enemy of the natives are the violent and greedy, but never pictured, rubber barons. These outsiders have invaded the land and taken the natives as slaves in order to harvest natural rubber from the trees that grow throughout the jungles. The most powerful representation of this evil comes when Manduca (Yauenkü Migue), the young squire of Theo and former slave of the rubber barons, encounters a field of crosses marking the graves of fallen slaves, victims of their captors’ brutality. He then finds a one armed man, who begs Manduca to take his life before he can be caught by his slavers. The scene shows how ravaged the locals have been by the men seeking riches on their land. The theme of white men seeking wealth through material ownership is a significant one throughout the film. Even the characters of Theo and Evan are viewed as materialistic as they each travel through the jungles with large amounts of luggage. Karamakate questions them both about their belongings, but only Evan is eventually able to let go of his material possessions. The one item that Evan insists upon hanging on to is a small portable record player. Through this he possesses the one item of actual value in the eyes of the natives: culture. In being one with the music, he can achieve a connection with nature that others who have encroached on the land simply cannot.

The truly horrifying enemy, though, is the church. When Theo first arrives at the Catholic mission planted to convert the natives, it is occupied almost exclusively by young boys whom the missionaries are trying to convert. Their methods of conversion, however, revolve around violence. The children are beaten if they fall off the path of the Christian God. This injustice seems to directly lead into Evan’s encounter with the mission, where it has now turned into a place of violence. It is ruled by a man who claims to be the Messiah, and is occupied by his deranged and misguided disciples, many of which are presumably the children or descendants of the children from Theo’s encounter with the mission. This series of encounters reflects the way that forced conversion only served to corrupt the native tribes, and Karamakate’s response to the latter meeting shows the contempt he holds for the converts.

The running theme throughout is the reverence with which the indigenous people treat their natural surroundings, and the derision shown by perceived intruders. It raises questions about the natives’ understanding of their surroundings, versus their blind acceptance. An thought provoking moment occurs when a group of natives, with whom Theo’s group has just spent the night, steals his only compass. He has explained the compass to them as a device that guides their way by harnessing the “energy of the Earth”. Theo angrily lashes out to get his compass back, refusing any kind of barter for the item. As Manduca removes him from the situation, Karamakate looks at him with contempt. Theo claims that if the natives give up their traditional ways of navigating with the wind and stars in order to use a compass, “that knowledge will be lost”. Karamakate responds stating, “knowledge belongs to all men.”

This scene suggests that the natives understanding of the natural world would not be hindered by scientific advancement, as long as this new understanding operates in parallel with their spiritual approach toward the natural world. It also paints a picture of how civilized society looked upon these so-called savages. The film suggests that advanced understanding of nature isn’t necessarily a hindrance to spiritualism, as long as nature, much like the indigenous people, is not exploited for profit.

Another insight into the spiritual beliefs of the natives comes with Karamakate’s thoughts on the parallels between Theo and Evan. “You are not one, you are two men,” he tells Evan in one of their first interactions. Later, when Evan threatens Karamakate with violence, he forgives Evan because he says that he killed him once before. This statement reflects a view of reincarnation toward the two men, as if Evan is not an independent figure from Theo, but is actually a second coming of the first scientist. This return offers Karamakate a second chance to bring the man enlightenment through the yakruna plant after having denied Theo the plant by burning it, thus causing Theo’s death.

It could be asserted that the titular “Serpent” refers to the winding river, which guides the characters through their journey. Once Evan consumes the yakruna, his final visions of the Amazon rainforests are that of the river twisting and turning to no end. Beyond this, he sees young Karamakate emanating light, and then spectacular visions of the stars and galaxies, suggesting a one-ness with the universe that only an embrace of his natural surroundings could elicit. When Evan awakens, Karamakate is gone, leaving him alone with the forest. For the first time since we saw young Karamakate in the films opening, a character stands alone amongst the trees.