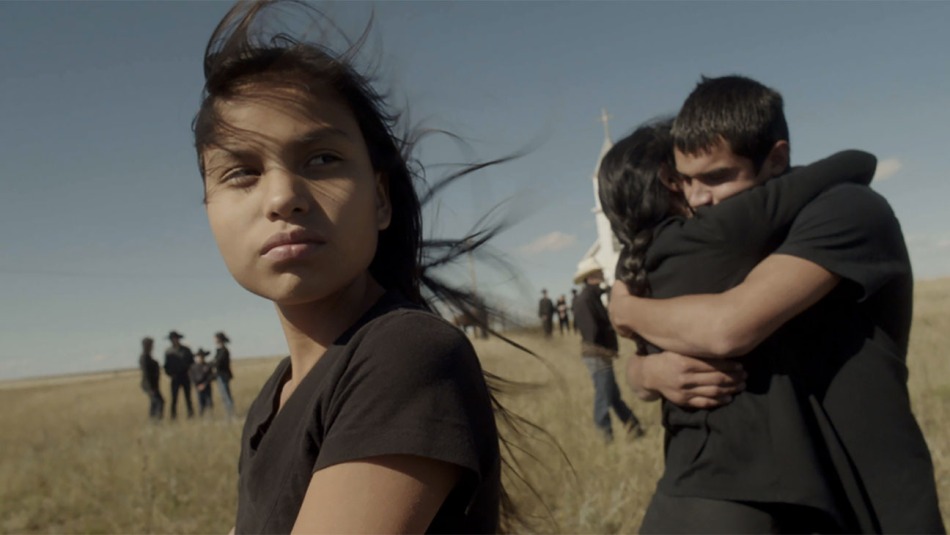 In growing up at the Pine Ridge Indian Reservation, Johnny (John Reddy) has observed the ailments of his people and experienced the poverty of their living conditions his entire life. He forms sentiments about them and their life choices and meets both with uncertainty. In some regards, he feels he doesn’t understand his tribe and he desires to escape from it. 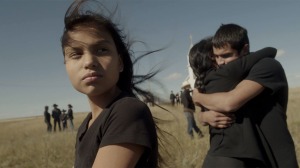 When breaking a horse, Johnny observes that “anything that runs wild [has] something bad in them. You want to leave some of that in there” in order for the horse to thrive. It is with this mentality that Johnny teaches his younger sister, Jashaun (JaShaun St. John), to be strong and to participate in boxing. Johnny believes that their upbringing forces them to be in perpetual alert, to have to look out for each other. When asked in high school about what he wants to be when he grows up, Johnny answers that he wants to be a boxer and is the only one of three students who wish to be anything other than a bull rider.

Scenes with Johnny and Jashaun are adorable, demonstrating the care that the two siblings have for each other. He carries her on his shoulders, plays games with her, and when she is upset, he tries to make her feel happier. Jashaun’s youthful innocence is characterized through her enjoyment of hearing ‘Thrift Shop’, a kind of song that many children enjoy thoroughly and some adults cannot stand in the slightest. It is during a drive that Johnny turns this song up for her to make her smile.

Near the start of the film, Johnny and Jashaun’s biological father dies. His funeral is attended by a number of his twenty-five children he had with his “nine or so” wives. Despite their father’s negligence throughout their childhood, Jashaun’s most valued possession is a jacket of his. Songs My Brothers Taught Me speaks to the strength of resilience as Johnny is a father-figure to Jashaun where her own father was absent.

Johnny sells alcohol at lucrative prices to members of the tribe in order to earn enough money to buy a car and escape to Los Angeles with his girlfriend. He feels a touch of guilt that he helps to fuel the alcohol addiction and dependency that much of the tribe suffers from.

Johnny’s older brother Cody is in prison and his few scenes with his mother (Irene Bedard) are of vital significance to Songs My Brothers Taught Me. Cody prefers to be in prison than at home and it’s likely because of his influence that Johnny seeks escape from his upbringing. When his mother informs him during a visit that she is attending church more often and that it is helping, he tells her not to “make God another man you abandon your true love for”, hinting his discontent with his absent father.

When Jashaun realizes that it only is closer and closer to Johnny leaving their tribe, she becomes saddened and tries to distance herself from Johnny. She spends time with Travis (Travis Lone Hill), an older clothing artist covered from head to toe in tattoos. He becomes the second brother the title of the film references and shares the trait with Johnny that he feels trapped by upbringing. Travis strives to live and appear as alternative as a means of self-expression and exhibiting his independence. Despite his appearance and our concern for Jashaun as she spends more time with him, Travis protects Jashaun from his friends, telling them that she is his sister when she walks in on them drinking (she may very well be his sister however, considering her father).

Jashaun learns through observing Johnny and Travis. She is taught how to fit in by her brothers that attempted to be different yet failed in some regard. Later in the film, Jashaun visits prison where she sees Travis being pat down before being able to talk with her through the telephone. She does not look away in shame when Travis is pat down; she neglects to see it as a humiliating gesture and she knows this does not make him any less of a person in her eyes or lessen her care for him. Jashaun “sees things [Johnny and Travis don’t] know” about their upbringing. She learns to embrace their upbringing whereas Johnny and Travis attempt to erase it.

The most emotive scenes in Songs My Brothers Taught Me are the ones that are silent like that when Jashaun sees Travis in prison. We see characters alternately toil and accept the suffering in their lives. Despite the potential to exploit the beauty of the landscapes, Chloé Zhao focuses predominately on characters rather than scenery with a humanistic handheld camera documenting nearly every scene. Weighing the circumstances leads us to form our response to the film rather than its imagery. Zhao excels at using the non-diagetic aspects of filmmaking- music, voiceover- to immerse us within the film.

When watching Songs My Brothers Taught Me, I think of my father- his childhood in Loggades, a small village in Greece, and his immigration to the United States to become a pilot when he was eighteen. I consider the lengths he went to make his travel possible and the conversation he must have had with his mother (likely similar to one Johnny shares with his) about when he would come back next to visit. I think of his sacrifices and I wonder if there was ever a time he felt he had to escape his upbringing.

In a moment of reflection, Johnny notes that is necessary to know which way to lean in the wind so that it doesn’t blow you away. He throws a handful of dirt into the air and it returns to the earth as it always will, a likely metaphor for his final acceptance of his upbringing.

0 comments on “Songs My Brothers Taught Me”