The Neon Demon is a very simple, a very pure film. In directing, Refn exhibits tunnel vision. There is little more to the film than aesthetic and bleakness- people evaluate their surroundings and profess their vapid conclusions of what they observe. There is a singular idea that is expresses throughout the entire film: “beauty isn’t everything. It’s the only thing”. Yet Refn isn’t redundant. Even though the mention of beauty finds its way into literally every conversation, Refn rephrases the conversation through visuals so that the mention of beauty is explored through different tones. 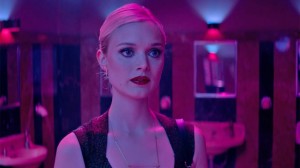 Jesse (Elle Fanning), an aspiring model, travels to Los Angeles to make an entry into the fashion industry. She participates in a photo shoot done by an amateur photographer so she can have photos to submit to an agency. In these photos she lounges on lavish furniture, fake blood trickling down her arm into a small pool below. The image evokes both fragility and danger, echoing the monstrous impact that Los Angeles holds on those within the fashion industry.

Refn caricatures the idea of the fashion industry in a way similar to the way Damien Chazelle caricatures competition in musical performance within Whiplash. In The Neon Demon, possessing and maintaining beauty is understood to be a brutal challenge. Likewise in Whiplash one must be a perfectionist and undergo humiliation and sacrifice to attain greatness. There is some truth in the perspective that these two films hold in regards to their industries, but intrinsically we know that they aren’t exactly correct and that real life seldom parallels archetypes in films.

Los Angeles forms a cage around Jesse. She spends almost all her time indoors and in the time she spends outdoors the cityscape looms behind her, suggesting her insignificance. Almost all windows are covered by blinds. After Jesse leaves the screen door open in her apartment, she finds a cougar inside her room. The visual motif of the wild cat is recurring throughout The Neon Demon, echoing the sentiment that one is either a predator or prey within the fashion industry. One is in or one is out. One can be replaced for a shoot at a moment’s instance for seemingly arbitrary reasons. If you break down under pressure, someone else won’t and they will steal your opportunity out from under you.

Jesse’s pale, round face and her innocence in appearance and mannerisms contrasts with the sharp, defined features that the other models possess. The models aren’t capable of looking at each other: they glare- even amongst friends. Jesse is introduced to a few models by Ruby (Jena Malone), a make-up artist who acts as a maternal figure and guide to Jesse. One model is known as “The Bionic Woman” for the surgical modifications done to her body. Jesse asks her if this is a compliment, her apparent naïveté concealing the cruelty behind the question. In contrast to her, Jesse’s beauty and youth is untainted. Jesse speaks of wanting to ‘be herself’ within the fashion industry, regarding herself as above the impurity of the fashion world.  She is aware of the measures that other models take to become as desired as her and she flaunts this fact in conversation, thriving in her self-perceived perfection.

Stiffness in dialogue and movement within The Neon Demon reflects cold stoicism. I don’t believe there are any real turning points for characters in this film, not even Jesse. Characters reveal who they are in time. Behind Jesse’s innocence is narcissism and a lack of empathy. She possesses a disarming confidence in her own beauty. Her innocence is constructed by her as a visage or for attention. There are those who seem jealous of it and seek to corrupt her, in the process becoming infatuated with her.

Various excerpts from the film resemble advertisements for beauty products or look to be taken from music videos. Cliff Martinez’s ever-present throbbing soundtrack to the film is similar to that of his work in Spring Breakers, although minimalist and composed at a slower tempo. There is just enough momentum within the story of The Neon Demon to maintain our attention, but it is the beautiful composition of the shots within the film that becomes entrancing. The Neon Demon thrives on aesthetics, whether it is the visual motifs of mirrors, windows, and shapes or it is the color of monochromatic surfaces and rooms.

Nicolas Winding Refn exhibits a remarkable degree of restraint in The Neon Demon. Despite the film’s appearance as a psychological thriller/horror film, the first violent scene does not occur until forty-five minutes have passed. After viewing the film, one might find my choice of word “restraint” to be unusual given a certain scene involving a corpse and another involving an eyeball, but despite the potential to make scenes involving models titillating or to cut scenes with violence rapidly to induce unease or disorientation, Refn resists. The theme of objectification is thoroughly explored, but cinematographer Natasha Braier never portrays the models in a way that could be deemed as either sexy or exploitative.

The Neon Demon is intended to entrance you with the composition of its shots and their aesthetic appeal. Unlike Only God Forgives, Refn isn’t trying to intrigue audiences with sparse narrative and subtle symbolism and unlike Drive, Refn isn’t trying to encourage empathy for his characters. The Neon Demon is a film that is meant to be looked at rather than become confounded by. It is glamour without substance, deliberately.