Certain Women opens on a still shot of a beautiful Montana landscape as a train slowly rides into the foreground of the image. This patient- but beautiful- shot sets the tone for the rest of the film. The images, captured largely outdoors with only the mountains to contain the setting, are reminiscent of classic Westerns both in their scenic beauty and their stillness. Peaceful would be a word which could describe much of this film, even in its more hectic moments. 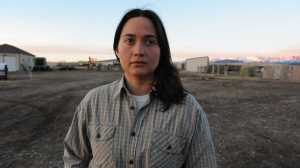 Director Kelly Reichardt and cinematographer Christopher Blauvelt use minimal camera movement to capture the three stories told in this film. The camera stays mostly stationary and simply captures the images presented to it. Reichardt never allows the viewer to be distracted by showing more than is necessary. Still, this minimalism paired with a group of outstanding performances creates an emotionally effective experience.

The film is made up of three vignettes which are connected only extremely loosely. The first tells the story of Laura Wells (Laura Dern) who is a lawyer in a small Montana town. She is struggling with a frustrating and stubborn client, Fuller (Jared Harris). The story comes to a climax when Fuller stages a hostage situation in the middle of the night at his former employer’s building. Laura is brought in to assist with the situation and when he asks for her help to escape, she does not hesitate to turn her client in.

The first story introduces a theme of loneliness that runs throughout the film. Reichardt makes it clear that Laura is a lonely person. She’s having an affair with a married man (the husband of the woman in the second segment), and is otherwise kept company only by her dog. Fuller seems alone as well, as he constantly comes to speak with Laura, seemingly just seeking her company when his wife makes him leave the house. When the characters are revisited toward the end of the film, Fuller is in prison and pleads with Laura to write him letters even if they’re about nothing. He explains that his wife left him to be with another man. The pair in this segment are perhaps met with a tinge of humor, but the story is a mostly sad one of two people who are very much struggling to get by.

The second vignette stars Gina (Michelle Williams) and Ryan (James Le Gros). They are a married couple building a home in the Montana wilderness. The focal scene in the story occurs when they approach and elderly man named Albert (Rene Auberjonois) to try to purchase a large amount of sandstone piled in his front yard.

The scene is particularly devastating as Albert clearly struggles with his memory. The viewer can’t help but feel for the old man who lives alone in a small house that he and his brother built. Again, the theme of loneliness is broached as Albert has no choice but to struggle with even the simplest of tasks and live with what memories he has left of his youth. Gina seems lonely as well, even within her own family. Her husband is unfaithful, though it is unclear if she knows. Her daughter treats her with contempt. Even when she is among friends and family, she seems utterly alone.

The final segment is possibly the most effective of the three. It focuses on Jamie (Lily Gladstone), a lonely woman who takes care of horses. She takes a class taught by Beth (Kristen Stewart) who she quickly develops feelings for. As Jamie continues to create opportunities to see Beth, she seems to become more and more conflicted as to whether to tell Beth how she feels. When Beth, commuting four hours to teach the class, doesn’t show up one day Jamie drives all night to see her.

Reichardt’s decisions in how to approach shooting this portion of the film are stunning. She holds the camera on the characters, allowing their faces to tell the story. In the final scene of the film, Jamie can be seen taking care of her horses, once again completely alone. It is an incredibly simple, yet striking moment. Lily Gladstone’s muted performance separates her from the bigger names throughout the rest of the cast. She conveys Jamie’s feelings through facial expressions, and brings the viewer into the mind of the lonely girl.  Her silent but emotive expressions are moving in ways that the viewer may not even realize until they are reflecting back on it after viewing the film. For anyone who has ever felt lost in the mundanity of daily life, the third segment may permeate your psyche for days after viewing the film. The final moments, though seemingly insignificant and uneventful, will haunt you with the sorrow of loneliness and monotony.

If you have the opportunity to see this film in the cinema, I absolutely recommend that means of viewing. While the subject matter is seemingly mundane and the tone is muted and subtle, the broad, scenic shots are things of beauty on the big screen, and the sort of emotional reaction drawn out by viewing a film in a dark and silent theater enhances the delicate but profound manner with which this film send its message. In a long line of beautiful, character driven films by Kelly Riechardt, this is perhaps her most moving.