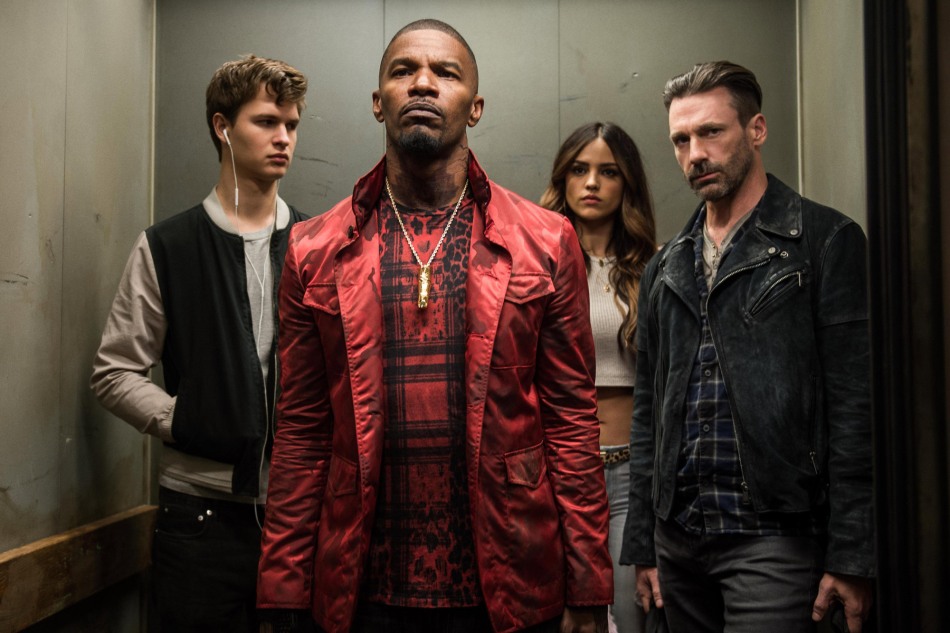 Edgar Wright is known for spoofing genres in his films. Shaun of the Dead spoofed horror and Hot Fuzz spoofed buddy cop movies. But what genre did Baby Driver spoof? Did he spoof heist films? Rom-coms? Car chase films? Musicals? Since this is Edgar Wright’s most ambitious film, I would say all of them. Wright’s directorial presence is strong throughout the entire film from the car chases to the visual comedy he so often employs. He is known for balancing substance and style and Baby Driver isn’t any different. 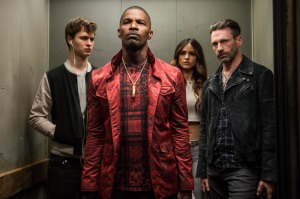 The character of Bats, played by Jamie Foxx, sums up best what this film is about in one line: “money, sex, drugs, and action”. The titular character of the film is Baby (Ansel Elgort), a getaway driver for a crime syndicate managed by Doc, played expertly by Kevin Spacey. Baby’s job is to get people to wherever they need to be and then get them out, all while evading police. However, Baby drives not because of his passion for the job, but rather to pay off a debt to Doc. After his debt is finally paid off, Baby thinks he can finally live a normal life. He gets a job as a pizza delivery man and falls in love with a girl named Debora (Lily James). Everything seems just fine until he gets roped back into the life of crime. On his first job back, everything goes awry. He now must escape with Debora from cops and criminals. And for our excitement, everything in this film is set with precision to music.

Music in Baby Driver elevates the film to something more than a generic action film. The very first scene is probably the best scene of the film with everything synchronized to ‘Bellbottoms’ by The Jon Spencer Blues Explosion from windshield wipers on a car to shots of people in the car to the entirety of the car chase. It adds depth to the scene. And not just the action scenes are synchronized to music. Take the very next scene from the film. Baby goes to get coffee while being set to the ‘Harlem Shuffle’ by Bob & Earl. It is one long take, and Baby interacts with his surroundings to the beat of the song and some of the lyrics are written on walls and trees on the way to the coffee house. The soundtrack is something special, including many more smashing tracks including the titular ‘Baby Driver’ by Simon & Garfunkel.

Baby Driver is undoubtedly an Edgar Wright film; you can’t mistake it for being anyone else’s. It has all his trademarks from the fast-paced editing to the witty dialogue muttered by the characters. Reappropriation of dialogue is utilized, especially when Baby uses phrases he hears from television and movies in general conversation, most notably a line from Monsters, Inc. Additionally, Baby Driver features endless pop culture references. Whilst Scott Pilgrim made reference to video games, Baby makes references to music. There is a scene where Debora and Baby are discussing all the songs that feature their names. They discuss how Debora’s sister Mary has endless amounts of songs about her while Debora only has two, one by Beck and the other by T. Rex. Baby Driver also features a little bit of Edgar Wright’s film geekdom. In one hilarious bit, JD, played by Lanny Joon, was supposed to pick up three Michael Myers masks. Michael Myers from Halloween. He ends up buying Mike Myers masks. As in Austin Powers Mike Myers. And you can’t forget Wright’s number one trademark: his impeccable eye for visual comedy opportunities and perfectly timed sound effects.

Despite the bliss of Baby Driver, the film does have its flaws. The second act of the film isn’t as strong as the first and third, and pacing suffers as a result. There is also on-the-nose romantic dialogue between Baby and Debora and the film falls victim to certain clichés such as the hero with the tragic backstory and the bad guy who just keeps getting back up again. Some characters also lack an equal amount of development, particularly Bats.

Despite its flaws, Baby Driver remains a strong summer blockbuster. In an era of clunky over-budgeted epics, Baby Driver shows us just how thrilling a kiss between two lovers can be and how nail-bitingly tense a car chase is. Baby Driver has quite a few, if not all of Edgar Wright’s directorial trademarks nestled within: exhilarating car chases, quality performances from the leads and supporting cast, and a killer soundtrack. As Edgar Wright’s most ambitious film to date, Baby Driver doesn’t quite reach the great heights it was aiming for, but it does a tip-top job in its attempt regardless.