Bill Morrison’s documentary Dawson City: Frozen Time chronicles the history of a small town in Canada named Dawson. Specifically, it tracks the discovery of hundreds of silent film reels which were uncovered during a construction project in the 80s as well as the town’s gold rush origins and evolution throughout the decades. It tracks a myriad of rises and falls for the all-but-forgotten town, whose artistic significance was that it was at the end of the travel line for film reels in the silent era. 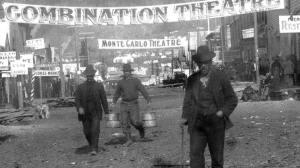 The film is nearly absent of dialogue. A few interviews were conducted with the historians responsible for first salvaging the discovered film reels, but Dawson City is otherwise narrated by captions and images of the town. It mostly consists of moments from the restored films, which are reconstructed by Morrison to great effect and which actively contribute to the film’s narrative structure. These beautiful moving images of a long abandoned art form come together to remind the viewer of the magic that existed when capturing an image on film was still a novel concept.

Dawson City meanders occasionally, though it’s hard to blame Morrison for being distracted by the rich history captured within the film reels. For instance, he spends a substantial portion of the middle of the film exploring the early gambling scandals in Major League Baseball as clips from the 1917 World Series were discovered amongst the Dawson City Film Find. While these historical tidbits are utterly fascinating, it does leave parts of the film feeling a little clunky and the final project feeling a bit over-long.

Perhaps the most powerful technique employed in the film is the use of the characters from the silent films to convey emotion. A particularly striking sequence unfolds when Morrison outlines the initial burial of the film reels, used as landfill to fill in a swimming pool. As the words on the screen describe the fate of these hundreds of silent films, characters from the films themselves are pictured looking lonely, sad, and somber. The use of these unrelated clips strung together in this particular way creates a tangible narrative. It makes the viewer feel as if he or she is watching these actors of a hundred years ago be buried alive. The expressions on their faces signify an awareness of being forgotten. The technique is used again, but with a more triumphant tone when the film reels are rediscovered.

Dawson City: Frozen Time is not just a documentary. It is a beautiful elegy to a past that has long since been forgotten. It is the chronicling of an art form abandoned by modern film viewers. It is the biography of a town that, in its heyday, created tremendous wealth but today has a population of less than 1500 people. Though the entirety of the Dawson City Film Find is not yet restored, I hope that Kino Lorber, the documentary’s distributor, someday releases the entire collection of films. The films are more than just a few silent movies: they are an actual, tangible piece of history that will hopefully one day play before our eyes.