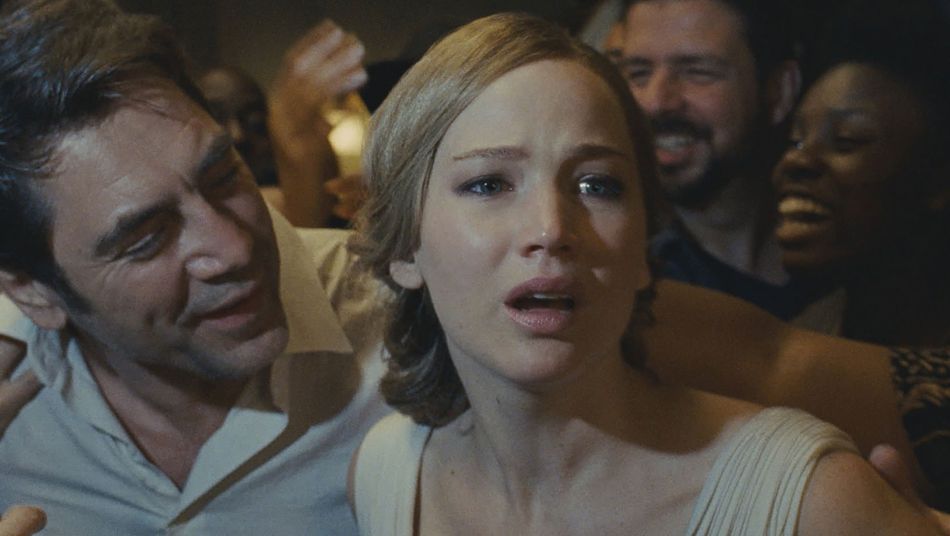 At the beginning of Pauline Kael’s review of David Lynch’s Blue Velvet, she uses a quote she overheard after a screening. It goes “maybe I’m sick, but I want to see that again.” That isn’t the only comparison that can be drawn between mother! and Blue Velvet. Pauline Kael praised the film while Roger Ebert famously panned it because it violated his morals and made him feel sick. Those two are the most common reactions one might experience when seeing mother!. The film is filled to the brim with ideas yearning to break free, filled with tough, unsettling images, and filled with audacious, ambitious, bold, and brilliant filmmaking. It is a film worth seeing but, I warn you, tread lightly when you see this film.

mother! is a film divided into two parts, the second part crazier than the first. mother (Jennifer Lawrence) is married to Him (Javier Bardem). They live by themselves until one night when they hear a knock at the door. man (Ed Harris) has arrived, mistakenly thinking that their home was a bed and breakfast. They allow him to stay the night and the next day his wife (Michelle Pfeiffer) shows up. Later the couple’s two sons show up and the film rapidly gets out of hand. There is a certain level of creepiness and insanity in this part in the ‘home invasion’, but it pales in comparison to the film’s second part.

mother becomes pregnant and Him writes an amazing, perfect poem. After the poem is published, Him becomes a literary God. He is worshipped by the reams and reams of fans coming to their house. They barge in and make the house their own. The house descends into complete and utter chaos as people begin to loot and murder.

The second half of mother! is what will make people sick, scared, and offended. There are ideas upon allusions upon allegories in the second half, but many are provocative and intended to make the audience have a strong reaction.

Like Darren Aronofsky’s earlier films, most notably The Fountain and Noah, mother! is filled with an overabundance of religious overtones. The film is one gargantuan biblical allusion, mother representing Mother Earth while Him represents God. They live in paradise, their own Garden of Eden, and their existence is interrupted by the arrival of ‘Adam and Eve’. There is a jewel in the study that represents the Apple and the two brothers, acted by real-life brothers Domnhall Gleeson and Brian Gleeson, represent Cain and Abel. The second half of the film depicts the creation of religion and the impact of its proliferation. This is where the film has elicited the strongest reactions from viewers. Aronofsky makes viewers sick, scared, and offended as he completes his allegory. That being said, it should not be overlooked that people are willing to give and care in the name of God despite those who murder and sacrifice in his name.

With its heaping amount of biblical allusions, mother! has been interpreted as an attack on Christianity. Aronofsky shows, in graphic detail, what people are willing to do for a God. He stops short of nothing, not even cannibalism. He attempts to illustrate how the veneer of civilization quickly fades and how society declines when presented with idols to praise.

Additionally, there seems to be an environmentalist message in mother!. Mother is supposed to be Mother Earth incarnate and throughout the film, she is constantly denigrated and ignored. She is constantly in the background and not given her due until she comes to make people regret not providing her with dignity. Her message is to listen to the Earth and do what she tells us or there will be dire consequences. Within Aronofsky’s story, there are a multitude of ideas and symbols present that I have noted and just as many more that I haven’t mentioned or likely even detected when viewing the film.

Like Black Swan, mother! is an exceptional work of filmmaking. The two films act as intense cerebral dramas and psychological horror films and make expert use of cinematographer Matthew Libatique. Both films create a sense of paranoia and claustrophobia by zeroing in on their subject’s head and using swirling tracking shots. Especially within the first half of mother!, Aronofsky highlights mother’s discomforts and suspicions with her new guests by keeping close to her and following her. You see how awkward mother feels with the unexpected guests. mother! captures both a director and cinematographer working at the peak of their forms.

Supplementing their efforts, the loaded cast of Lawrence, Bardem, Harris, and Pfeiffer is magnificent as well, Lawrence being a particular standout in her role as mother. At the start of the film, she projects a sense of someone who wants her life to return to normal. She merely wants her and her husband live alone again. But as the film progresses, Lawrence becomes unhinged and her range in acting is shown. Her screams and rage characterize the most tense and powerful scenes of the entire film. Meanwhile, Bardem is excellent. His deep voice and weighty demeanor give him an imposing appearance fit for his role as God.

There is one scene toward the end of the mother! that made my stomach turn. It filled my stomach with knots. The scene alone almost reversed my views on the film, but I realized that this is what Aronofsky wanted. He wanted us to feel something that we didn’t want to feel, he wanted us to see something we didn’t want to see. He wanted a movie that people were going to feel something while viewing, good or bad. To me, that is admirable.

In Noah, Russell Crowe’s character says that “Fire destroys, water cleanses.” mother! is a fire that definitely destroys. mother! is superbly acted, exquisitely directed, and filled with so many ideas and allegories that can’t possibly be appropriately elaborated upon in a mere review. Aronofsky and Lawrence work in perfect unison to create something so wholly original and thought-provoking that would make even Stanley Kubrick blush if he could see it. mother! is great. Plain and simple. Maybe I’m sick, but I want to see it again.