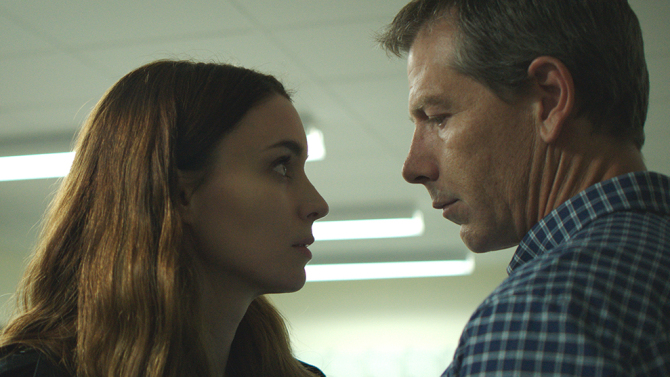 Difficult that it is to watch Una without a sense of unease given the nature of the story, viewing is made more challenging with how the story is presented. 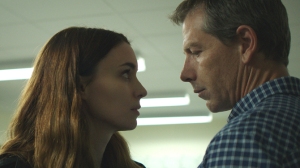 Una is an adaption of the play Blackbird by David Harrower in which a young woman, Una (Rooney Mara), tracks down the man, Ray (Ben Mendelsohn), who sexually abused her at the age of thirteen. Ray was convicted of his crimes and sentenced to four years in prison. Fifteen years later, Ray has become a successful warehouse manager and changed his name to Peter. However, Una hasn’t tracked Ray down for vengeance. Rather, she is looking for the truth behind the illicit sexual relationship they shared believing that they loved each other.

The first half of Una is told using a combination of flashbacks from the affair and its consequences, and the present day meeting between Una and Ray. It frequently switches back and forth between the two, but this makes the production feel stagnant and difficult to absorb oneself in it while watching. At times the flashback sequences are intrusive, and they often feel like they merely display the story whilst the characters simultaneously tell it. However, when the pair discusses the day their affair was uncovered and Ray was arrested, the flashbacks cease and focus is drawn to the two on-screen. Unfortunately, this moment is brief, but the occasion allows both Mara and Mendelsohn to exhibit their acting prowess.

The play takes place in a warehouse break room but director Benedict Andrews, who also staged the original theatrical production in 2005, decided to incorporate more locations and characters into this film. Yet these additions dilute the strength Una could’ve had. One particular subplot, with Ray having to lay off employees on the same day Una reappears in his life, adds increased pressure upon Mendelsohn’s character but this is not particularly needed given the strain he faces solely by Una’s presence.

Despite Una‘s flaws, performances from both Mara and Mendelsohn are fairly strong. Mara performs well as a woman with a difficult past struggling to comprehend her life and Mendelsohn effectively displays a man who is guilty and repentant. However, though their relationship is despicably plausible, it does not feel entirely credible due to the lack of focus between the two on-screen in the present day.

I cannot help but feel that if Andrews had focused more on the original text in Blackbird rather than utilizing flashbacks and added scenes, Una would have been a more satisfying and engaging view. As it stands, while audiences might be intrigued to discover how the film ends, they might also find themselves bemused when the credits roll.