At the midpoint of each month, we feature a figure or theme within the film community and share our thoughts about related works. Each of our critics chooses a particular film to write about (sometimes two!). Our choice for a Retrospective Roundtable might be inspired by a recent event in the film community, an exciting new release, or from a common interest shared between our critics.

David Lynch‘s films have enraptured audiences who desire a taste of the surreal. Lynch’s films are often thought-provoking, difficult to interpret, but also crafted in a manner that we want to uncover the mysteries that come into play during his films. Outside of movies Lynch is a bit of a Renaissance man, known for his popular TV series Twin Peaks, his painting and music, and his practice of Transcendental Meditation. Our retrospective of Lynch comes at an critical time- Lynch has reportedly sworn off of filmmaking, citing barriers within the industry. Nonetheless, we celebrate his work in this column.

Alex Sitaras– Eraserhead was the first David Lynch film I saw and I think I’d recommend it to anyone as a first Lynch film if one can withstand the film’s gruesome body horror (otherwise I’d recommend Blue Velvet. Narratively, the two films are simpler than most other Lynch films). Even though Eraserhead was Lynch’s debut film, many of his directorial trademarks are fleshed out in full- commonplace dialogue and scenes made exceptionally awkward, distortion of sound, scenes of singing and dancing, dreamlike and hallucinatory sequences, etc. Lynch exhibits a certain preparedness to becoming an auteur in Eraserhead that first time directors rarely demonstrate. 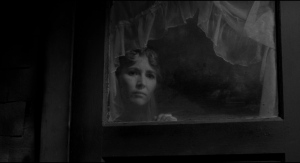 The theme of unexpected parenthood is at play in Eraserhead and the film is widely believed to be inspired by Lynch’s fear of becoming a father. Eraserhead is set within an industrial wasteland, adding to the unease that viewing the film generates, and features a misshapen baby that a man is informed he is the father of. Lynch has kept as a secret how he created the baby even forty years after the film had been released. He famously experienced many difficulties in the production of this film, taking five years to finally complete the film, but to good effect- endeavors like Eraserhead are timeless. Much of the film’s mise-en-scene- the hairdo that Jack Nance dons, the screeches of the deformed baby amidst grating industrial sound effects, the charcoal black and white image- remains branded into one’s mind long after viewing.

Kevin Jones– While he may be better known for his surrealist tendencies, it is films such as The Elephant Man that Lynch really demonstrates his mastery of filmmaking. Harnessing the power of cinema in stirring up emotion and feeling, The Elephant Man tells the story of John Merrick. Born with a severe deformity that has seen him abused, rejected, and tricked into becoming a freak at the circus, Merrick’s tale is a tragic one that is compassionately told by Lynch. Starring John Hurt as Merrick, Anthony Hopkins as the doctor who forms a bond with him, and Anne Bancroft as a kind actress who becomes Merrick’s friend, The Elephant Man is a film that demonstrates the impact simple kindness can have on a person’s life. By simply showing him love and spending time with him at the theater or in his room, his friends make his life one that is no longer marked by suffering and loneliness. Instead, it is one defined by love and connection.

In this, The Elephant Man is a film that really resonates a deep emotional level. It is a celebration of that which makes us different or a freak. It celebrates those who value personal differences because they make up who a person is, all while damning those who belittle those they view as different.

In its celebration of differences and that which makes us eccentric, it feels akin to an early career semi-autobiographical work from Lynch, especially after Eraserhead. An uncomfortably weird film, Eraserhead firmly established Lynch as a unique filmmaker who made films that created great discomfort in audiences. Through the story of John Merrick, a man who similarly was an original and made people uncomfortable, Lynch shows that just because something may appear unique or weird on the surface, it does not mean it is unworthy of love or admiration. Peeling back the layers of that person or artwork can prove to be a rewarding experience, delivering great appreciation of what makes it so uniquely itself.

Ben McDonald– Blue Velvet perfectly encapsulates David Lynch’s brilliance while also serving as a suitably understandable introduction to his work. Incorporating many of the thematic motifs Lynch will explore in later films and flavored with his characteristic surrealism, the film is a darkly bizarre and mesmerizing tale about a not-so-typical American suburb. Kyle MacLachlan plays Jeffrey Beaumont, a college student that stumbles down a dark and sensual odyssey into the criminal underbelly of his seemingly ideal hometown with the random discovery of a severed ear. On his journey is the doe-eyed Sandy (Laura Dern), the vulnerable femme fatale Dorothy (Isabella Rossellini), and the deranged hitman Frank Booth (Dennis Hopper).

Conveying what makes Blue Velvet such a captivating watch is incredibly difficult. There’s an indescribably surreal quality permeating all of Lynch’s work, and often his films only make sense using a dream-like logic. In one of the most iconic scenes in the film, Frank drags Jeffrey to the house of his makeup-wearing partner Ben (Dean Stockwell), who smokes a long cigarette while lip-syncing to Roy Orbison’s ‘In Dreams‘. It’s such an eccentric scene that would make absolutely no sense anywhere else, but in a David Lynch movie, it just feels right. The acting throughout Blue Velvet is also quite memorable. Hopper and Rossellini both dedicate themselves with such a powerful energy to their roles that it’s hypnotic if not outright uncomfortable. Hopper is especially nuts as the pathetic but terrifying villain with a gas-huffing problem and an Oedipus complex.

Blue Velvet wasn’t the first Lynch film I had seen, but it was definitely the one that left the strongest first impression. Like a rare dream you remember for years, Blue Velvet crosses my mind often, and it’s certainly one of the most enthralling works from the brilliant mind of David Lynch.

The thing that’s always really resonated with me about Mulholland Drive is the dual nature of Lynch’s relationship with Hollywood expressed in the two halves of the film. The first half shows the endearing side that he has always loved. It emphasizes that nostalgic and perhaps overly optimistic LA that Lynch had imagined when he first fell in love with early Hollywood movies. The second half splits into the seedy and dark side of the city. It exploits the same negative views of Hollywood explored in one of Lynch’s favorite movies: Sunset Boulevard (which heavily influenced Mulholland Drive).

I think that Lynch’s most interesting art comes out when he decides not to spoon feed his audience. He has a tendency when he is at his most interesting to simply forgo answering the questions that he raises. He raises these questions as a philosophical conundrum for his viewers and so to answer them would be to rob the viewer of the self-exploration that the film allows. Mulholland Drive is the epitome of this principle in Lynch’s filmography and is one of the unparalleled masterpieces in modern filmmaking.

0 comments on “The Films of David Lynch”