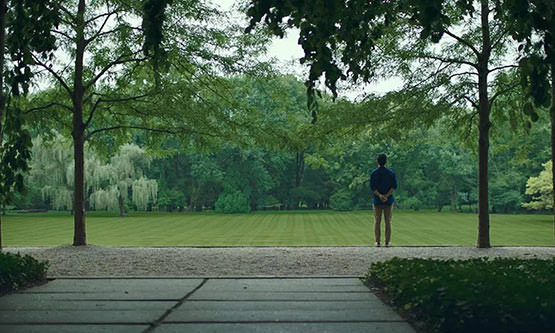 I feel inclined at the start of this review to depart briefly from my usual structure, as I think this film presents an unusual and fascinating case. There is significant value in taking a moment simply to appreciate the unique story of the filmmaker who crafted Columbus. Kogonada didn’t pave the path to his first feature film in the traditional way. He didn’t work his way up through the stages of production until he was finally given a directors chair. He made a name for himself through a passion for film and through his popular series of online video essays exploring the patterns and styles of influential filmmakers from the past. It is noteworthy that his deep appreciation of film as art, and particularly as a visual medium, leads to this poetic and thought provoking debut. 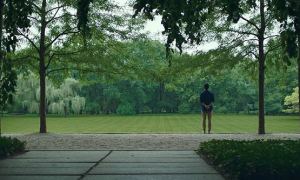 Columbus tells the story of Jin (John Cho) and Casey (Haley Lu Richardson) as two young people who encounter each other while the former is staying in Columbus to look after his sick father. Though the pair know each other for only a short time, they form a quick and intimate bond. The dynamic between the two main characters in the film is very unconventional and doesn’t take on the passionate romance narrative that the viewer would necessarily expect given the plot. Still, the connection between the two is more loudly amplified through incredible emotional performances that reveal not just written characters, but real humans experiencing real pain and suffering.

Visually, Columbus expresses itself largely through its physical environment, and more specifically through architecture. Jin’s father is a renowned architect and Casey has a particular interest in architecture. It is not an accident that the town of Columbus is considered an architectural “Mecca”, as the film states, and much of Columbus’ imagery is derived directly from the beautiful and unique buildings that occupy the city. Kogonada explores themes of symmetry and asymmetry throughout the film with verbal, visual, and thematic queues spurred by the architecture. Similarly, he delves deep into the topic of modernism, a theme which floats close to the surface throughout the film’s run time.

In reflecting on the film, it strikes me just how simple the whole thing is. I could sum up the plot in only a few sentences, which may lead to some audiences perceiving Columbus as “slow”, but it was so intimate and engaging throughout that the viewer becomes more drawn into the details of the individual moments than the broader scope of the plot. Even seemingly uneventful moments have an incredible depth of emotion clearly attached, and Kogonada certainly knows how to point a camera to make every single frame of the film undeniably more interesting than if he had stuck to a more traditional visual style.

I have little doubt after seeing Columbus that we are witnessing the beginnings of a brilliant career. But more than that, it seems that we might be witnessing the first work of an entirely unique artist. In viewing the film, it is exceedingly obvious that any ordinary filmmaker could’ve constructed this story in a way that would’ve been perfectly acceptable and palatable to audiences. But I’m not sure that many could’ve taken these precise ideas and built them into the expressive and artistic work that appears on the screen. I’m not sure what direction Kogonada will take next or whether wider audiences will respond to Columbus in the way that art film enthusiasts have, but needless to say I am very excited to find out.