At the start of Phantom Thread we get an idea of what Reynolds’ existence is like. He is a renowned dress maker. He values quiet. His work is his passion and he expects those around him to succumb to his needs. He views the women around him as tools to service his desires. They are the hands and fingers helping him create his art, they are the bodies on which his dresses are draped, and they are the instruments through which he can express his physical desires. The only woman in his life who is anything resembling a confidant is his sister Cyril (Lesley Manville) whose responsibilities include ending his romantic relationships when they become too much for him to handle.

When Reynolds meets the young and pretty waitress Alma (Vicky Krieps), he is the embodiment of charm. She is taken by the attention from this wealthy, handsome man who seems utterly infatuated with her. Indeed even audience members will be seduced by Reynolds’ calm and confidence. However, by the end of their first date he is dictating her physical measurements to Cyril who expresses that Alma is perfect for Reynolds, referring merely to the shape and size of her body. As the relationship goes on, Reynolds’ infatuation rapidly deteriorates. He is intolerant of any action, no matter how courteous, that disrupts his work in the slightest. When Alma expresses her love, he merely accepts but does not reciprocate. When she attempts to give him the gift of an intimate dinner for two, he responds with anger at the interruption of his routine and berates her for cooking his asparagus contrary to his usual preferences.

It is in this first portion of the film that Anderson really explores the way that powerful men often take advantage of women. Reynolds meets Alma under the pretense of ordering dinner, and indeed his feelings toward her are constantly expressed in regards to hunger. She is an object for consumption in his eyes, and when he is full he wants to be able to put his fork down and silence her. He speaks candidly about her body. When he remarks on her small breasts, of which she is obviously self conscious, he indicates that it is his responsibility to give her breasts, if he chooses. He views himself as an omnipotent God, and the women in his life are his disciples.

Another interesting dynamic in the film is the obvious parallel to Alfred Hitchcock’s Rebecca. They share similar costumery and a similar setting (a massive and elegant mansion). They also flow nearly side by side in terms of plot. Both involve a wealthy and prominent older man engaging a young, beautiful, and adoring woman who works in a service job. In both, the male protagonist is ambivalent toward the woman at least in part due to the looming spectre of his late wife (though both with entirely distinct reasons). And Cyril’s character is undoubtedly Anderson’s attempt at recreating Rebecca’s Mrs. Danvers. 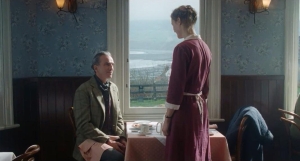 Where Rebecca and Phantom Thread diverge is in the actions of their female protagonists. While the protagonist of Rebecca remains a subservient and dedicated wife, Alma takes aggressive action. Her attempts to win Reynolds’ love and loyalty evolve to a level of questionable morality. When she is purely loving and devoted, his interest wanes. However, in her darker actions, the pair discover passion and an unconventional bond. To say more would unfairly betray some of the most tense and intriguing moments of the film. Suffice it to say that the scene in which this bond is solidified rivals Day-Lewis and Paul Dano’s famous “milkshake scene” from There Will Be Blood.

The question could be raised of what genre to attribute to Phantom Thread. Though it follows many of the conventional beats of a romance, it doesn’t quite have the feel-good atmosphere of most romantic films. Instead this film, which focuses almost entirely on the romantic relationship between a specific couple, feels more like a suspense thriller. Despite its quiet tone, it is the tension that really highlights Phantom Thread. The building tension is reinforced by Jonny Greenwood’s spectacular score, perhaps the most impressive of his many collaborations with Anderson.

Phantom Thread is a highlight in Anderson’s already spectacular career. It is an outstanding send off for Day-Lewis whose performance is subtle but wrought with complexity. Krieps impressively keeps pace with him throughout, creating a masterwork of quiet tension. On the surface, Phantom Thread might appear to be relatively mundane. Its trailers paint it as a tame period romance. However, if you wallow into its depths you will find a wealth of brilliant characterization. As a likely final collaboration between two of the great artists of the last several decades, it exceeds all expectations.