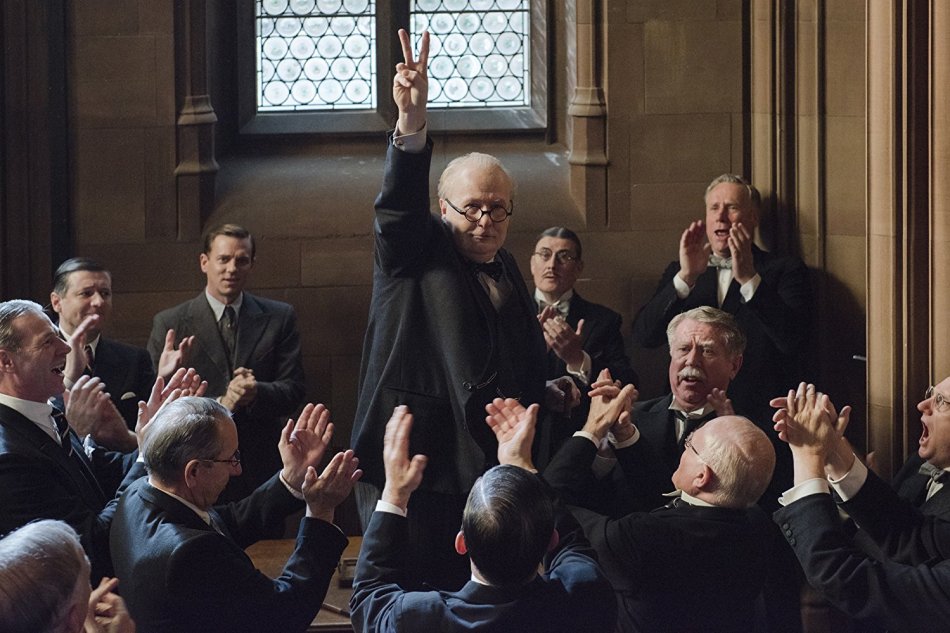 I refuse to believe that Gary Oldman is in Darkest Hour. I believe they had a clone of Winston Churchill and claimed that it was Gary Oldman acting. That is how good Gary Oldman was in this film. He disappears so deep into the role that Winston Churchill is revived for the film’s 2-hour running time. Gary Oldman’s performance isn’t the only admirable element of the film, but it is definitely the most noteworthy thing in an otherwise average, Oscar-bait film. 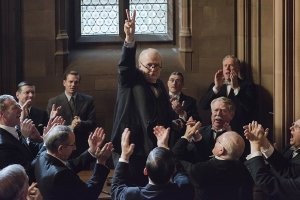 The plot of the film is straightforward. The film follows Winston Churchill (Gary Oldman) as he becomes the Prime Minister during the early days of World War II. It follows him as he navigates tough wartime situations, and it shows his relationship with King George VI (Ben Mendelsohn) and other members of Parliament, most notably Viscount Halifax (Stephen Dillane) and Neville Chamberlain (Ronald Pickup). It also explores Churchill’s relationship with his wife (Kristin Scott Thomas) and his secretary, Elizabeth (Lily James).

The best place to start when talking about the merits of Darkest Hour is the acting. Every single performance in this film could be arranged from solid to phenomenal. Ben Mendelsohn turns in another strong performance, once again cementing his place as one of the most underrated actors working today. Stephen Dillane does a fantastic job on his performance, a total surprise for me. He accomplished the rare feat of stealing some scenes away from Gary Oldman. Their confrontations and the scenes in which he schemes against Winston show his extensive range and brilliant acting ability. While all of the other performances certainly were good, Gary Oldman was just one step above the rest. He rises up to the grandeur of Churchill when the situation calls for it, such as when giving a speech in front of Parliament, and he also demonstrates calm restraint in the quieter, tender moments with his wife. Churchill was a man who didn’t compromise but was also capable of having a laugh and loving his fellow citizens. Oldman brings both of these sides out and executes each scene to perfection. There might be no equal to Oldman’s performance in this past year.

Apart from standout performances in Darkest Hour, the cinematography by Bruno Delbonnel is exceptional. The lighting of the film is truly amazing. It sets the stage for each scene and helps determine the mood of each scene. The camerawork is also extraordinary. Camera movement and the tracking shots bring to mind Paul Thomas Anderson and the lateral tracking shots remind me of Wes Anderson. Combining the camerawork of Wes Anderson and Paul Thomas Anderson successfully is a feat unto itself. The production design and set decoration are also worth mentioning. The set decoration combined with the cinematography during Churchill’s meetings with King George create some of the most beautiful and striking images in recent memory. They remind me of the interiors of Barry Lyndon.

Even so, I do have my complaints and grievances about the film. My biggest complaint is the pacing. The film can be painfully slow at times, especially during the second act. The first and third acts are great but the middle pales in comparison, not keeping the same energy and seemingly dragging on forever. Since Darkest Hour is a historical drama, there isn’t too much artistic freedom that can be had, but it felt too often that I knew immediately what was going to happen and how it would happen.

Despite a lagging middle section and a standard, factory-made story, Darkest Hour is a noteworthy film, if just for the performances alone. The acting and the cinematography help Darkest Hour rise above obscurity and will likely prevent the film from becoming known as “that other Dunkirk film.” Gary Oldman turns in an Oscar-worthy performance and Bruno Delbonnel creates some stunning images for us stare at in awe. Moments of comedy that happen in moments of tension and the film’s rousing speeches also Darkest Hour stake its place among the more prominent of 2017 films.