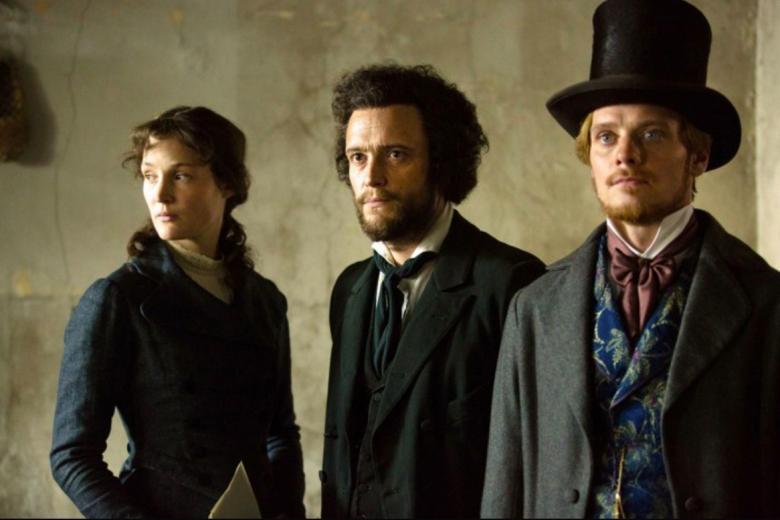 Raoul Peck’s The Young Karl Marx is precisely what its title claims. The film chronicles the early life of German economist and thinker Karl Marx (August Diehl) and his early friendship with collaborator Friedrich Engels (Stefan Konarske). It captures Marx’s political philosophy through the lens of early industrialism and the struggle for workers rights, appropriately framing Marx’s work on behalf of the working class.

The Young Karl Marx has remarkable moments in terms of its understanding and exploration of Marx’s socialist philosophy. Peck has a long history of politically fueled filmmaking and The Young Karl Marx certainly asserts his views in context of Marx’s. It asserts Marxist economic philosophy with great specificity, and even goes so far as to contrast Marx with other socialist thinkers of his era. The film also explores complex ideas like materialism.

Perhaps The Young Karl Marx’s greatest strength is its cast. Diehl gives a wonderfully convincing performance as Marx. He radiates the energy of a rebellious political radical as well as the wisdom of a brilliant theorist, and his look and behavior imply Marx’s middle class background. In contrast, Konarske reflects Engels dichotomous nature as a young affluent man fighting for socialist ideas. His first scene, one in which he approaches a group of working class people to try to get their testimonies for a book he is working on, both show Engels’ empathy for the struggles of the working class and cleverly satires the attempts of the wealthy to connect with the poor through distant intellectualism.

Rounding out the main cast is Vicky Krieps as Karl’s wife Jenny. Through Krieps’ strong performance, Peck gives early socialism a loud, radical female voice. Jenny is portrayed not merely as the doting wife of so many films about pre-20th century history, but as a political voice in her own right. Krieps is believably brilliant and quick witted, and she perfectly balances Diehl’s own energy.

In a few too many unfortunate moments, The Young Karl Marx does fall into standard fair biopic territory. Though Peck addresses a number of daring concepts throughout the film, he still spends a substantial amount of time addressing things like romantic relationships and petty family quibbles. This sort of thing is difficult to avoid in the genre, but it’s also what keeps most biopics from having much staying power. While the ideas are present and the execution is tidy, The Young Karl Marx falls far short of daring filmmaking.

Ultimately this adds up to a moderately effective but ultimately forgettable experience. Certainly The Young Karl Marx has some power behind its message, but in terms of staying power it won’t separate itself from any other typical biopic. Peck deserves recognition for taking on controversial political topics, and certainly in this era he deserves credit for speaking on behalf of working class people, but as an artistic exercise The Young Karl Marx still leaves a lot to be desired.