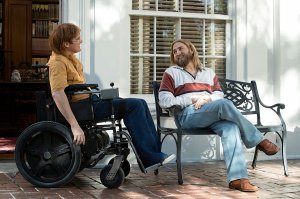 Alex Sitaras: This month we have a pretty diverse set of Most Anticipated titles. Two first time directors, two veteran directors, and a restoration of a beloved film. First up is Don’t Worry, He Won’t Get Far on Foot. Don’t Worry marks the return of Gus Van Sant following his ill-fated The Sea of Trees. It’s the first film he’s written the screenplay for in over a decade, and stars Joaquin Phoenix as John Callahan, a man who becomes a quadriplegic following a car accident. Based on a true story, John discovers a love for cartoon drawing that helps him in his journey to become sober. As a whole Don’t Worry looks to be a feelgood feature, and I’m excited to see Phoenix and Rooney Mara star together in a film.

Kevin Jones: Agreed, Alex. Don’t Worry, He Won’t Get Far on Foot‘s trailer really has a classic “indie film” feeling to it, which may not be everyone’s cup of tea but in the hands of Gus Van Sant, it is hard to not look forward to the film. The good part with this one is that it seems as though Van Sant has gotten back on his feet after the disaster that was The Sea of Trees.

Yet, what may be even more interesting is the appearance of Joaquin Phoenix. He is, notably, not an actor who just signs onto any role, rather being incredibly selective in the process. While he has been busier of late with four films coming out between last year and this (as well as another with Rooney Mara), one can almost always be assured that there will be some reason as to why he signed onto the role.

Beyond Phoenix and Mara though, it will also be interesting to see Jonah Hill and Jack Black in the film, adding to what is a terrific cast. In particular, Black has not been given nearly enough chances to showcase his dramatic acting chops outside of Richard Linklater films, so the film will give viewers the chance to see him balancing both his comedic instincts and dramatic skill under different direction.

Alex: I like that we see Phoenix in a more comedic role here. While his best acting is perhaps displayed in performances of disturbed characters- The Master, The Immigrant, You Were Never Really Here– I enjoy seeing him in roles like this one or Her since they show the breadth of his range in acting.

Kevin: Terrific point about Phoenix. It is all too rare that he gets to show off his comedic skills with this one looking like a great opportunity on that front. 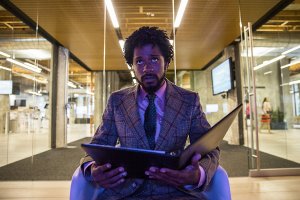 Another film that is incredibly intriguing this month is Sorry to Bother You. The directorial debut of Boots Riley, the film depicts an alternate-yet-modern version of Oakland and the events that unfold once a black customer service rep learns a unique trick to help him earn promotions. The film stars LaKeith Stanfield and Tessa Thompson, both of whom seem to be blossoming into major stars. After most audiences were introduced to Stanfield in Get Out and Atlanta, it will be interesting to see how he transitions into being a lead in a film.

Also in the cast is Armie Hammer, coming off of the success of Call Me By Your Name last year. This role seems quite eccentric for him – while still relying on his natural charm – so it should be quite interesting to see him try his hand at the role.

Alex: To be fair to Hammer, Call Me By Your Name seemed plenty eccentric for him, and then he surpassed all expectations with that role. Sorry To Bother You looks to be a film that experiments with genre, the film being part rags-to-riches story, part social realism, part action, part comedy, and also part psychedelia. In viewing the film, I’d expect a bonkers, joyful experience. For Annapurna Pictures, the distributor for the film, here’s hoping the film is able to become a box office success given some recent underwhelming experiences they’ve had in distributing Detroit and Professor Marston.

The next film up to discuss is Eighth Grade. The film is a coming-of-age story directed by prominent YouTuber Bo Burnham as his feature film debut. It stars Elsie Fisher in only her second live action role (you may recognize her voice as Agnes in Despicable Me), and, as you might guess, the film takes place during the eighth grade year for Fisher’s character Kayla. This film has been one of my go-to answers to the question “what film should I look out for?” given the success of last year’s Lady Bird. Myself, watching the trailer made me experience so much secondhand embarrassment in seeing middle schoolers vie for attention on social media and in seeing adults woefully unable to relate to teenagers. I’m not really sure what I’ll feel in viewing the film to be honest.

Kevin: This is definitely one of those films that, as you said, has been one of the more hotly anticipated films of the year. Not only did I love the recent mainstream coming of age films that have focused on the struggles of young women in today’s world (Lady Bird, The Edge of Seventeen), but I have long enjoyed Burnham’s comedy.

From YouTube to his Vines to his stand-up, he consistently demonstrated not only great wit and an ability to make an audience laugh, but a keen understanding of how life is for many young people in the digital age, namely because he experienced it himself. He has a great ability to take all of the fears, anxieties, confusions, and social issues of the time to heart, while still being funny. It will be very interesting to see how he is able to transition into filmmaking, especially since this tells the story of a young girl trying to become a YouTuber.

Not only is it incredibly self-referential of course, but it should allow him to probe the life of this young girl with some measure of “lived” experience that should allow the film to be both relatable and retain his typically honest approach to comedy that touches on life in today’s world. Plus, who better to make a film about a young person trying to make it as a YouTuber while dealing with all of the common issues teenagers face?

Alex: Very true. One other factor that won’t be of too much note now, but more so later, is A24’s decision to release this film during the summer. They released Lady Bird in November, much closer to awards season, and I believe Gerwig benefited as a first-time director because of the numerous nominations her film received. Lady Bird didn’t have to depend on audiences’ recognition of her name- or that of Ronan or Metcalf‘s- in order to draw people to theaters.

Burnham definitely faces an uphill battle for drawing audiences in, but I also wouldn’t be entirely surprised if this film received similar success to Lady Bird. Jordan Peele demonstrated just last year that an indie film does not have to be released at the close of the year, or even by an established filmmaker, to garner sustained attention and acclaim. 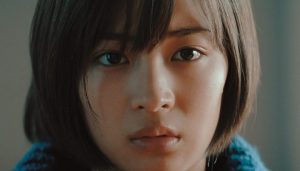 Hirokazu Kore-eda also has a new film out this month, his name certainly familiar to anyone who followed the Cannes Film Festival this year. Kore-eda won the Palme d’Or for his film Shoplifters, and while that film probably won’t be screening in US theaters till the fall at the earliest, his preceding film, The Third Murder, is set for a July 20th release.

Known for his family dramas, The Third Murder is a sidestep for Kore-eda, the film delving into the legal system as a courtroom drama. The film stars Masaharu Fukuyama (he starred previously in Kore-eda’s Like Father, Like Son) as a lawyer who is to defend a client that he isn’t sure is guilty despite the client’s confession to the crime. If found guilty, the client, played by renowned Japanese actor Kōji Yakusho (13 Assassins), will face the death penalty.

Kevin: I have to admit that I have never seen a film by Kore-eda, but after his win of the Palme d’Or for Shoplifters, it is clearly time to fix that oversight. With The Third Murder, it is incredibly interesting that he tried to create a film that explores the difference in opinion as to how the court works in Japan. Citizens think it is a search for truth, whereas Kore-eda says that it is actually where lawyers “make adjustments to the conflict of interest”. In the film, Kore-eda will follow a lawyer who breaks the mold and tries to find the truth.

Both of these differs greatly from typical American courtroom dramas, as justice is at the centerpiece of those films. For an outsider, it will be incredibly interesting to see the difference in approach and to see how he is able to bring to life the world of the Japanese courtroom.

Alex: On the production side, Kore-eda made an interesting choice in choosing to shoot in Cinemacope for the film. With a number of scenes shot during the winter and with scenes in claustrophobic spaces such as the courtroom and holding facility, I can’t help but think of The Hateful Eight. Still, Tarantino’s epic was not shot in Cinemascope (rather, Panavision with a wide aspect ratio), but the directorial intentions by the two directors could be comparable between these two films. Cinemascope has also seen some use today in recent blockbusters Jurassic World: Fallen Kingdom and Deadpool 2.

Kevin: Beyond the new releases coming out, one of the films that I am eagerly anticipating this month comes from the Criterion Collection. The film is A Matter of Life and Death, which quickly became a personal favorite of mine after seeing it earlier this year for the first time.

Starring David Niven, Kim Hunter, and Raymond Massey, the film depicts a Royal Air Force pilot calling into the radio operator. Having returned to Britain having a mission in Germany with damage that will bring the plane down, the pilot has ordered his crew to all parachute out of the plane and to save themselves, while forgetting to mention his own parachute is riddled with holes thus dooming him to certain death. Speaking to the young American girl on the radio, the pair quickly hit it off as the pilot descends in his final moments, only for the film to take a turn for the fantastical and show off the incredible imagination of directors Michael Powell and Emeric Pressburger.

From there, this one delivers a gorgeous look at romance and the balance that exists between Heaven and Earth, all while continuing Powell and Pressburger’s trend of World War II films that explored Anglo-American relations. It is the most upfront with this examination to be sure, examining whether or not an American and a Brit can truly love one another due to their differences in culture or if love is powerful enough to control even Heavenly operations. It is a powerful film, one that may be a bit sentimental but may have one of the purest depictions of love that I have ever seen in film.

Alex: I am a little surprised that Criterion has not released A Matter of Life and Death yet, but it’s certainly not because they don’t regard the filmmakers as excellent: the duo had eight films in the Collection prior. It was merely just a matter of time. I’ve not seen this film yet- you were my introduction to the Archers a month or so ago- but the blend of fantasy and realism, of color and black-and-white, definitely pique my interest. Not to mention the 4K transfer looks gorgeous.