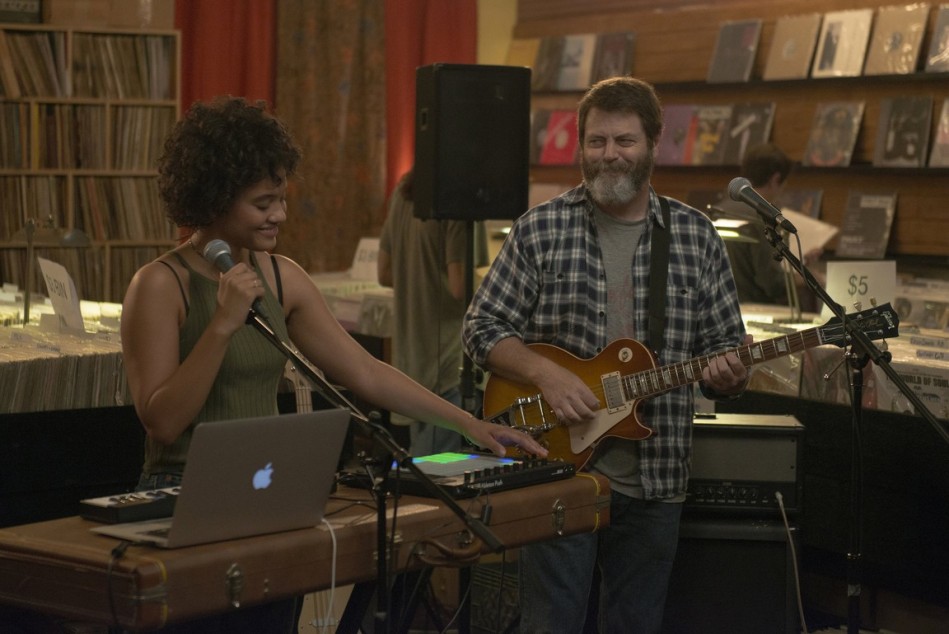 Sundance has always played the role as film’s indie rock counterpart so it was only fitting that Brett Haley’s warm and sweet, Hearts Beat Loud would make its debut at the festival. The film tells the story of Frank Fisher (a grounded and infectious Nick Offerman), a down on his luck widower and record store owner who is about to close up shop due to upcoming expenses. Frank’s passion for music not only exist within the store but at home where he tries to guilt his daughter Sam (a star in the making performance by Kiersey Clemons) into joining his “jam sessions.” Sam on the other hand just wants to study for her pre-med classes before heading to UCLA full-time, AKA Frank’s upcoming expenses. When the two finally lay down some beats together, an indie rock hit is created. 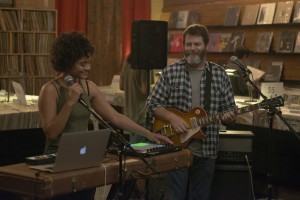 While Frank wants to take We’re Not a Band -Sam’s attempt to derail her dad’s vision turns into the perfect indie rock band name- to new heights, Sam, is off spending her final days with self-proclaimed starving artist and girlfriend, Rose (Sasha Lane). Clemons and Lane showcase a romance that is so raw and authentic that it will remind viewers of the complicated nature yet beauty of young love. One of the most affectionate scenes shared between the two occurs in an improprable display of intimacy when Rose teaches Sam how to ride a bike. While Sam’s summer loving is happening so fast, Frank spends his time at the bar with his bestie, Dave (Ted Danson, who seems a little too comfortable playing a bartender) and landlady/love interest, Leslie (Toni Collette) who wants to save the record shop.

At the core of Hearts Beat Loud is a film that is less about music and more about accepting change. Both Frank and Sam are preparing for new chapters in their lives that they might not be fully ready to transition to. Their music gives this father-daughter duo a farewell tour of life as they know it. Falling under the newly-minted genre of “nicecore” by many critics, Hearts Beat Loud has all of the qualities of a classic feel-good Sundance vehicle. Cynics might skip this film, but solid performances from Offerman and the incredibly talented Clemons mixed with the film’s lively tempo keeps Hearts Beat Loud from ever missing a beat.

Featuring killer original music such as “Hearts Beat Loud” and “Everything Must Go,” the soundtrack is best listened to with the top down or speakers raised to eleven. Clemons seriously has pipes, while Offerman is far from being the Sonny Bono of the duo. In total, the film is a refreshing cool down in the middle of the blazing summer blockbuster season. While Hearts Beat Loud could have come off as a John Carney (Sing Street, Once) B-side track in lesser hands, Haley orchestrates his own hit single.