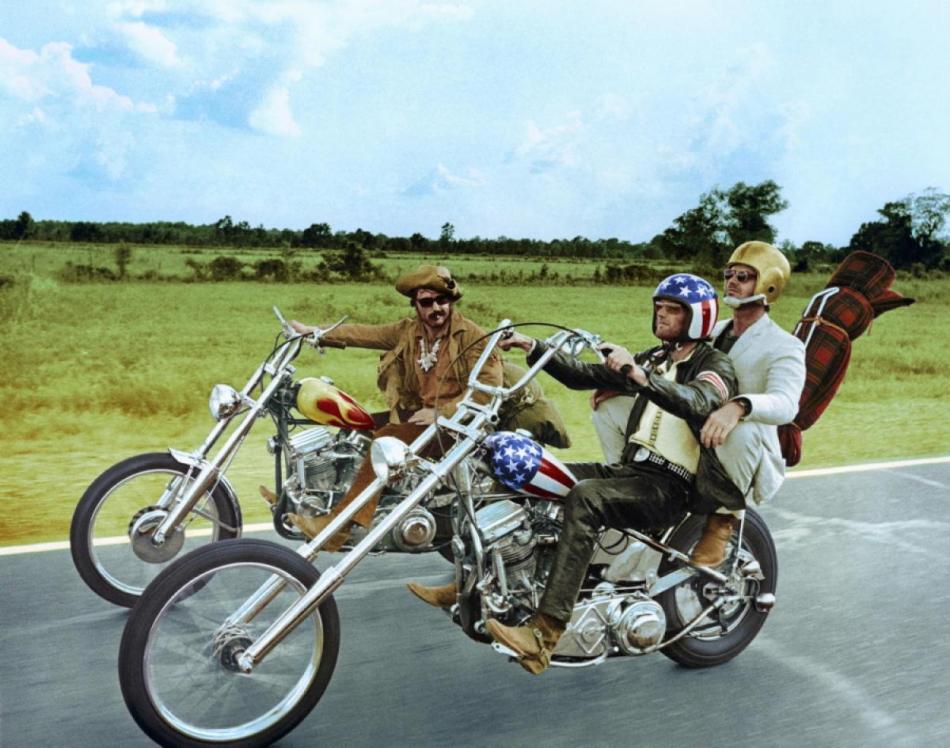 “I saw the best minds of my generation destroyed by madness, starving hysterical naked,
dragging themselves through the negro streets at dawn looking for an angry fix,
angelheaded hipsters burning for the ancient heavenly connection to the starry dynamo in the machinery of night.”

In January of 1969, Richard Nixon swore the oath of office to become the 37th President of the United States. Nixon campaigned on a platform of social conservatism, appealing to what he referred to as the “silent majority”: mostly rural white voters whose interests hinged more on preserving what they perceived as traditional American values than political goals. He mobilized voters based on a general disdain for activist youths, then known as the counterculture, and minority groups who he made a point to associate with crime and drug use. It is no surprise then that five months after Nixon’s inauguration, Easy Rider caught on like a wildfire among American audiences. Telling the story of two young men smuggling cocaine from Mexico, riding around on their motorcycles, and shirking all of the traditional values that Nixon’s silent majority clung to so tightly, Easy Rider was a truly revolutionary work of art. Liberation through sex and drug use was an idea not only made mainstream, but one which was embraced to the tune of the third highest grossing movie of the year (just behind Midnight Cowboy which carried its own unheard of sexual and class message). 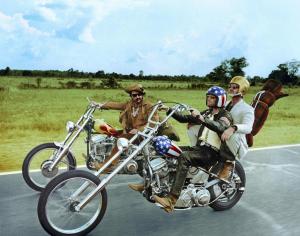 While political strife can put intense social pressures on a nation, it also tends to motivate fascinating art. In the tradition of the experimental filmmakers of the Soviet Union or anti-fascist films like Salo and The Great Dictator, 1970s counterculture lashed out against a system it viewed as inherently oppressive and borderline dictatorial. When the creeping footsteps of fascism are heard echoing through the political system, it falls on the shoulders of the artists to inspire social revolution.

Though not yet graced with the benefit of historical hindsight, modern America shows many of the same signs of strife and division that motivated the filmmakers of the American New Wave to mobilize against Nixon and the stodgy conservatism of the Silent Generation. The floodgates of political division have opened up into every facet of day-to-day life, and civility has been all but abandoned as opponents on opposite ends of the political spectrum do not quibble over policy, but fight tooth-and-nail over fundamental moral values. 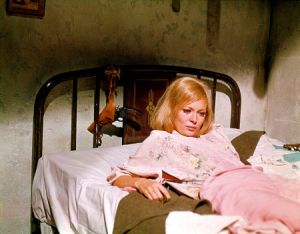 Bonnie and Clyde is the film generally considered to be the starting point of the American New Wave or ‘New Hollywood’ movement, a film which refused to adhere to the standards of classic Hollywood moralism. Rather than face the humdrum existence available to them, the protagonists chose a life of crime, running from the law. Bonnie and Clyde spoke openly about sex and embraced violence, and they were lionized for it. This treatment of two characters viewed as morally repugnant drew massive criticism from studio executives, including Jack Warner himself. However, this didn’t stop audiences from turning out in droves to watch the young couple who robbed banks.

1967 would prove a turning point in American film culture, and not just because of Bonnie and Clyde. In the Heat of the Night and Guess Who’s Coming to Dinner, a pair of Sidney Poitier vehicles, confronted controversial racial issues albeit more in the safe, traditional language with which classic Hollywood broached sensitive topics. Cool Hand Luke, on the other hand, aggressively took on the criminal justice system. Though it wasn’t the first prison film to frame the prisoners as the heroes and the guards and warden as the antagonists, it did send a resounding anti-establishment message, approaching law enforcement not merely as an oppressive force, but a cruel and corrupted one. 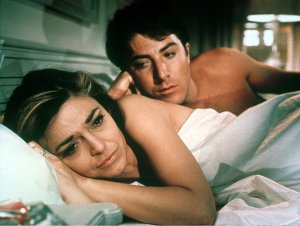 Perhaps the most iconic and important film of this very early stage of the New Hollywood movement was Mike Nichols’ The Graduate. Following up his equally powerful film Who’s Afraid of Virginia Woolf, The Graduate revealed the repressions and sexual desires hidden behind white picket fences in middle America.

Filmmakers like Martin Scorsese attacked political corruption and numbness to violence in inner-cities with films like Taxi Driver, while Peter Bogdanovich spoke for the frustrated and impoverished people of rural America with Paper Moon and The Last Picture Show. Robert Altman and John Cassavettes crafted lifelike, humanist films that exposed the deeply entrenched emotional struggles of the American people that were typically avoided by the epics of the Hollywood studio system.

The New Hollywood era was also a golden age for documentaries as filmmakers learned how to subtly reveal their worldview without overtly inserting their own perspective. There is no more forceful indictment of American capitalism than the Maysles Brothers’ Salesman, which portrays a group of travelling Bible salesmen who pile into cheap motel rooms far from their families, clinging to a hope and a prayer of paying the bills. To this day there is no more stark statement on the decline of middle class America. Taking a similar tone, Frederick Wiseman’s High School represents rising American autocracy and militarism in the microcosm of Northeast High School. The film lashes out at nearly every facet of American life including the rampant racism and sexism in much of American culture, but with a remarkable objectivity as if to show how commonplace and expected the situation has become. 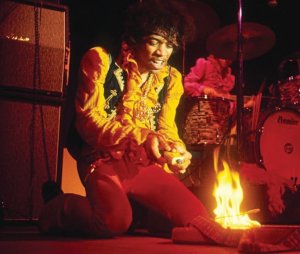 1970s filmmaking even projected the counterculture’s revolutionary music. Films like Monterey Pop, Gimme Shelter, Festival and Don’t Look Back captured the youthful free spirit of the musicians and concerts who provided the soundtrack for political revolution in Nixon’s America.

For all intents and purposes, the New Hollywood movement ended with the rising popularity of the summer blockbuster. When the box office dominance of Easy Rider and The Graduate was replaced by Star Wars and Jaws, studio funding and screen time began to shift away from radical, revolutionary art toward effects-driven action thrillers. Fast forward to modern times and the summer blockbuster remains the staple of mainstream American filmmaking. Superheroes and formulaic family films dominate American culture, sending a message that is as bland as their profits are assured. However, the wind may soon be blowing in a different direction.

Regardless of one’s political alignment, there’s no denying that the 2016 election of Donald Trump ushered in a heightened divisiveness in American culture. Political discourse is as radicalized as it has been since Nixon was in office, and citizens who might otherwise be disengaged are now open to hearing a political message in their daily lives. Young people in particular are politically activated in a way that they simply haven’t been since the counterculture aged out of their revolutionary habits. Finally, the environment is right for a new political movement in film, and perhaps it has already begun.

While we have the benefit of hindsight to contextualize the New Hollywood movement of the 1970’s, we remain extremely close to the art of the present moment, so it’s particularly difficult to assign historical importance to events of the last couple of years. That said, if there is a New New Hollywood stirring, what is the ignition point? What is our generation’s Bonnie and Clyde?

The Best Picture victory of Moonlight was one of the most shocking in my lifetime. Not simply because of the unusual way the announcement itself unfolded, but because of the statement that the win made. For as long as I can remember, the Best Picture Oscar has gone to a vanilla biopic or some other crowd-pleasing if not forgettable drama. Moonlight was different. Moonlight was a genuinely beautiful work of art both in its flawless craftsmanship and in its message. Its willingness to broach sensitive political topics both in terms of race and sexuality made it an longshot to take home Oscar gold to say the least, yet it did. Is that enough to make Moonlight the Bonnie and Clyde of a new revolutionary movement in Hollywood? Maybe it is, maybe it is not, but the fact that the award announcement was made by an aging Warren Beatty and Faye Dunaway seems too poetic to ignore. So too is the fact that it won the award by the skin of its teeth over just the type of dazzling Hollywood musical that would’ve garnered box office success and awards recognition in the years before the collapse of the Hollywood studio system.

2017 followed up Moonlight with a number of other politically charged and surprisingly popular art films from young filmmakers. Jordan Peele’s Get Out is a fresh updating of Stanley Kramer’s Guess Who’s Coming to Dinner. However, abandoning Spencer Tracy’s hackneyed white protagonist absolving himself of the burden of racism, Get Out is much more sharply critical of the distanced pseudo-tolerance of many wealthy American liberals, and more importantly it puts its black protagonist in the driver’s seat. Greta Gerwig’s Lady Bird and Sean Baker’s The Florida Project examine the destruction of the American middle class and the struggles of poverty in ways that haven’t been seriously addressed in popular art since the 70s. Veteran filmmakers with strong political beliefs like Raoul Peck and Spike Lee have thrown their hats into the ring, addressing inequalities and racism with their recent films I Am Not Your Negro and BlacKkKlansman, respectively. Peck’s The Young Karl Marx even dared to make heroes of socialist icons. 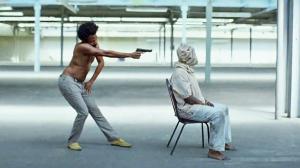 The political energy has poured into other forms of film art as well. Donald Glover’s TV show Atlanta addresses racial issues from an honest and intimate perspective. Under his musical pseudonym, Childish Gambino, his single This is America and its accompanying music video offer a chilling indictment of the commodification of black people in American culture and a powerful message on gun control that has deeply resonated with young people in particular. At its meager four minute run-time it is already one of the most powerful works of filmmaking of 2018. The Handmaid’s Tale, a serialized adaptation of Margaret Atwood’s 1985 novel, offers a horrifying dystopian view of where modern political division and the threat of a misogynistic, theocratic government might take us.

Is this all to say that this New New Hollywood movement is a guarantee or that it is already happening? No, there is no way to gain adequate perspective on an artistic movement at such an early stage. This is meant only to assert that the pieces are there. The attitudes and the energy to spark an artistic revolution are in place. The sense of marginalization, oppression, and injustice have motivated people to speak out, and in a time of such incensed speech, it stands to reason that great art will both lead and follow.

0 comments on “Revolution on the Silver Screen”