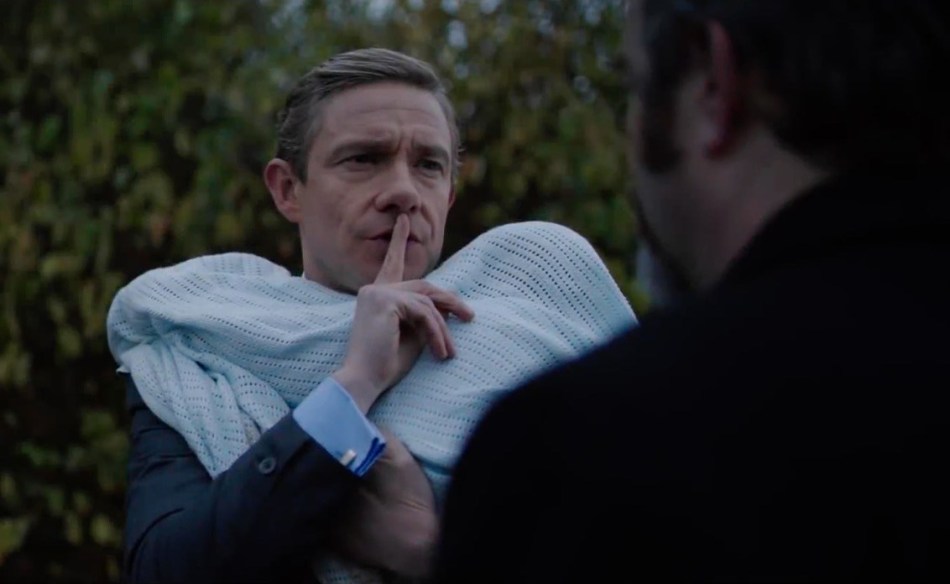 When Andy Muschietti’s It remake was released last year I remember a quote showing up amidst the marketing campaign that described it as a ‘fun house ride of scares’. Whilst I wouldn’t disagree with that evaluation, I’d argue that by the same rules Andy Nyman and Jeremy Dyson’s Ghost Stories is the decrepit and rust-enthused ghost train which travels from town to town and earns a reputation as an urban legend for bypassing every safety regulation in the book. Ghost Stories offers similar thrills and fun to It but with an overwhelming sense of atmosphere and a unique tone that makes the film hard to resist.

Taking an anthology route to storytelling, Ghost Stories follows the investigation of Professor Phillip Goodman (Nyman), a skeptic who has devoted his life to debunking psychics and frauds on his television show as a way of stopping the public from becoming dependent on the idea of the supernatural. When he is contacted by the man who inspired his career path as a child, Charles Cameron (who has been missing for years), he is confused by Cameron’s insistence on the existence of life after death. Living in poverty within a small caravan, Cameron dictates Goodman’s futility at trying to prove otherwise, calling him a liar for ignoring the truth as he hands him three different reported cases without explanation. Of course he accepts, and the film then follows Goodman as he investigates each case, shown as they are recounted by the victims, whilst Phillip’s own beliefs are brought into question and he starts to wonder what else may be happening around him.

Based on Dyson and Nyman’s London play of the same name (which I’m also a huge fan of), and as a screen directorial-debut, Ghost Stories is extremely confident behind the camera as well as in front of it. Dyson’s penchant for horror and grim tales within his work as part of The League of Gentlemen is clear throughout, as is Nyman’s knowledge of mind-trickery from his partnership with accomplished mentalist Derren Brown. The film often brings into question the mental state of its characters and attempts to doubt the sanity of Goodman himself, and sadly it’s the one aspect of the film which I feel was still undercooked. Some nice jarring editing aside, the film’s attempts at making the audience question Goodman instead just produces intrigue into his backstory instead of making us doubt him. It’s not a particularly bad side-effect to have, but when the rest of the film feels so sure of itself, this element sticks out.

Goodman’s first case leads him to Tony Matthews (British comedy actor Paul Whitehouse), a night-watchmen for a disused female insane asylum. Tony’s working-class personality allows Whitehouse to clash with Nyman, whilst also cementing the seriousness of his experience as his paranormal tale is enough to break down his standoffish exterior. As an introductory case, Tony’s experience is filled with typical horror tropes and imagery. The disused asylum is claustrophobic and endless, and Dyson/Nyman have fun playing with the tension this allows them. What few jumpscares there are don’t feel cheap, and the practicality of the effects push the film’s rustique and British sensibilities forward. What’s happening to Tony is genuine and his reactions are typically British skepticism, as Whitehouse calls for the sounds he hears amidst the black abyss beyond him to ‘leave it out’ multiple times. Both Dyson and Nyman are well-versed in dry/black comedy and it’s a perfect fit for the genre. Whilst this first tale seems relatively by the books (both to us and to Goodman), the implications of Tony’s home life drip-feed information to the audience as set-pieces hint towards the film’s third act. Again, it’s not a huge display of intelligence but it’s enough to peak interest throughout.

The second case leads Goodman to the home of teenager Simon Rifkind (played wonderfully by The End of the F***ing World’s Alex Lawther), an occult-obsessed and dissociative young man who has a strange relationship with his strangely-absent parents. Rifkind is one of the film’s highlights, and Lawther is having a ball playing such a tense and emotionally-troubled character. His wall is filled with satanic images and research on a variety of deities, and cinematographer Ole Bratt Birkeland stretches the depth of Simon’s cell-like room to great effect. It’s comedy that’s as black as night and flows effortlessly into Simon’s tale of a nighttime drive through a forest, one in which his car breaks down and he’s confronted with a sinister presence in the surrounding trees. Again, it’s a tremendously simple idea and one genre enthusiasts have seen a hundred times, but the strength of direction and the larger-than-life performance of Lawther strengthen it to incredibly fun heights. It’s this sequence where, amidst a cinema packed with moviegoers, I witnessed simultaneous jumps from the scares on screen and guffaws of laughter immediately afterwards. It’s been a while since I’ve seen a film which has managed to walk such a tightrope between horror and laughter so well.

Goodman, unimpressed yet slightly perplexed by both tales, still believes there to be rational explanations for everything seen so far, though the presence of strange goings on amidst his journey across the country pushes him forward. The third case brings in Martin Freeman’s Mike Priddle, a financier in the city who tells the story of a poltergeist within his home whilst looking after his (implied) inhuman child. This implication is really the only hint of comedy throughout the rest of the film. As Ghost Stories builds towards the final act a clear sense of dread takes over. Freeman’s poltergeist shenanigans are the only real examples of visual effects too, and it’s sad that they stand out among the rest of the practical work. Priddle is probably the least-developed of the three victims, though Freeman is still able to stand out within the cast thanks to some brilliant material later on. It’s clear throughout the final tale that something else is lingering, and some other well-executed jumps (one in particular, from the leftist of fields) have Goodman question the wild goose chase Charles Cameron had him go on in the first place.

Ghost Stories’ final act will prove as polarising as possible, with many people refusing to be onboard for where the ghost train takes them whilst others will be lamenting its exuberance for years. It’s an almost drastic change in presentation, though with just enough build up to justify some tenuous links later on. As Goodman’s belief is tested to the brink of insanity, the film revisits each of the tales told to varying degrees of success. Much like the rest of the film, if you buy into Goodman’s story then you’re in for some fun.

Nyman has played Goodman for years in the stage play, and whilst his performance never truly stands out among the talent of British actors he and Dyson have assembled for the other roles, it provides a strong and sturdy backbone to the narrative. His pessimism is ours and he experiences the trials and tribulations of having his sanity questioned over various paranormal experiences. His self-doubt reflects back onto the audience. It’s a reactionary performance and one that, with a lesser-performer, would have left the film’s ending with less of a gutteral punch.

Ghost Stories’ knowledge of classic British horror allows it to slip into the pantheon of BBC ghost stories and tales of the Gothic. It’s incredibly English (possibly to a fault for foreign audiences) and remains as dry, bleak and quirky as you can possibly imagine. Ghost Stories is not quite as harrowing as perhaps its creators would want you to believe, but it exceeds in the horror department tenfold and allows Dyson and Nyman to rank their work alongside that of which has obviously inspired them.