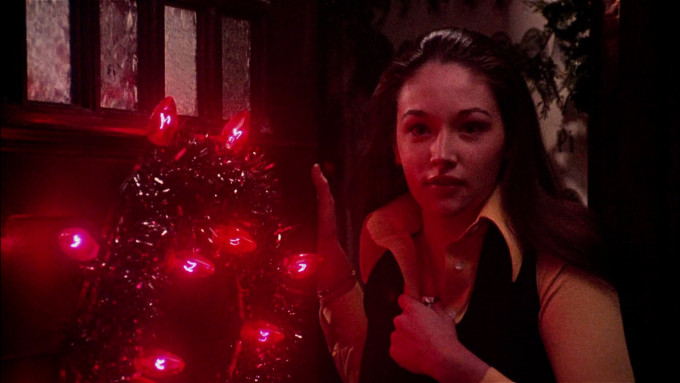 In 1983, director Bob Clark made A Christmas Story. A Christmas season classic, the film is nearly impossible to avoid seeing around the holiday season at least once. It is so ingrained into Americana, it is hard to imagine that Clark made another Christmas film just nine years earlier with a very different tone. Black Christmas is coated in the same nostalgic love for the holidays.  Christmas carols play over the opening credits while popping up periodically throughout. Wreaths adorn the door while lights are hung about the home. The setting is a bit different than A Christmas Story: a sorority house near a college campus. In there, the group of sorority sisters party, hang out with their boyfriends, and laugh. That is, until a mysterious stranger  beings calling them periodically, moaning on the phone and using a variety of voices to frighten the girls. The police fail to take the incidents seriously until one of the sorority girls vanishes  without a trace. Coupled with the dead body of a young local girl being found in the park, the police finally wake up and realize what the audience has already concluded for itself: these girls are in serious danger. 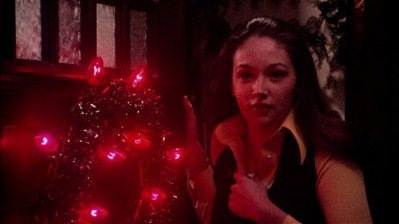 Clark makes an interesting decision in the opening of the film. As Christmas carols play over the soundtrack, the film deploys a handheld point-of-view shot from outside. The camera glides across the street to the sorority house, peeks through the window at some of the girls drinking and talking, and then climbs up the side of the house. The film periodically returns to this point of view shot as he leers down ominously at them as they talk on the phone, as he moves about the hallway, or as he attacks the girls. This voyeuristic approach serves to create a considerably unique type of tension for the film as the audience always knows where the killer is, even if his identity is never revealed. The film never tries to hide the killer’s location, instead playing it up as the girls go about their lives as they normally would – albeit, a bit on edge due to the dead body of the girl in the park and the rape of a town girl a few weeks prior – in blissful ignorance of the horrible danger in which they find themselves.

This voyeuristic approach is especially effective during the kills, as girls naturally walk around their rooms or sleep or check up on their friends, only to to suddenly face a crazed lunatic. The film often cuts to a point of view shot of the girls from the perspective of the killer, further obscuring his identity and creating a terrifying intimacy to these kills.

Interestingly enough, the film definitely ruminates on the Roe v. Wade decision, which came to fruition a mere year before the movie’s release, through the issues faced by Jess (Olivia Hussey) and her boyfriend Peter (Keir Dullea). The film also portrays the danger that men pose women in society with its anonymous male killer who makes highly sexual and derogatory comments to the girls before murdering them. As opposed to many slashers, Black Christmas does not line up its female victims before a buzzsaw because they are promiscuous. They are certainly sexual, but certainly not to the satirical levels of Friday the 13th or Halloween, and the death of the young girl in the park challenges the genre’s rule that the innocent are safe. No one is safe in this film. Anyone can easily die for no other reason than a deranged peeping tom has been harboring violent animosity towards the female gender.

One of my favorite parts about Black Christmas, however, has to be the setting. Christmas time is one of such joy and nostalgia, yet Clark uses it as a brutal juxtaposition to the horror that unfolds at this sorority house. One brutal example finds Clark cross-cutting between one of the girls being killed (from both the killer and victim’s POV, no less) and Jess hanging out outside as she listens to a group of young Christmas carolers sing “O Come All Ye Faithful”. Christmas decorations littered around the home, bright red lights that are cast on some of the girls’ faces, and the fact that the sorority house is largely empty due to many of the girls going home for the holiday, all prove quite crucial to the film and give it a conflicted feeling. At such a time of unity and joy, Black Christmas depicts a group of young women being isolated and attacked with their families and friends left to suffer in their wake.

Perfect for either the Halloween or Christmas season, Bob Clark’s Black Christmas blends its horror with some great light comedy, while also being blessed with terrific performances from its entire cast. As the sturdy and conflicted Jess, Olivia Hussey threatens to dominate the picture, but Margot Kidder as the devil-may-care Barb manages to own the spotlight. Truly, there are very few films like Black Christmas, playing on one’s worst nightmare and never bothering to let the audience know who the killer is. He  could be anyone, anywhere, and doing anything. It is indeed a terrifying premise, one that makes you want to lock all your doors extra tight ahead of the upcoming holiday season.