Val Lewton’s story is one of Early Hollywood’s most fascinating. Lewton was a producer for RKO, creating horror movies meant to compete with Universal’s overwhelming success in the genre. However, he had little but contempt for Universal’s formula. From the role of producer, he shared control over his films’ artistry that rivaled early Hollywood’s great auteurs despite the looming threat of RKO’s money grabbing executives. Lewton’s films were assigned to him in a peculiar manor. The studio heads provided him with a gripping title, sure to fill seats, and Lewton would be tasked with backward-engineering a film around the title. He never disappointed. 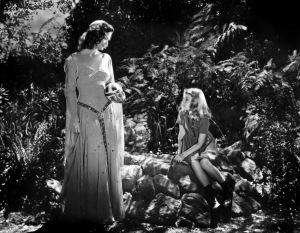 Lewton’s first effort, Cat People, remains a horror icon. It is pure atmosphere, completely bucking the Universal trend of thrilling monster movies. Yet it was a monstrous commercial success (pun intended) and its legacy has held steadfastly. Still, Lewton’s sequel Curse of the Cat People, which is more a distant cousin to the original than a sibling, is perhaps his most moving and certainly his most personal film. The movie was inspired by Lewton’s relationship with his own daughter. It is a tale of loneliness and childhood innocence and if you blink at the wrong moment you may miss all of the horror to be found within its run time.

The film revisits Cat People’s protagonist Oliver Reed (Kent Smith), though the true star here is his daughter Amy (Ann Carter). Amy is a young girl, isolated by an imagination that Oliver views as over-active. When Amy starts to claim she’s been speaking with Oliver’s late wife and Cat People star Irena, played by the dazzling Simone Simon, her father becomes angry. The friendship between Amy and Irena never quite feels nefarious or even terrifying. It’s almost comforting to see this young child speak with the spectre of her father’s past and for one moment feel understood and even loved.

Amy makes a series of peculiar friends throughout the film. Lewton uses Curse of the Cat People as a platform to bemoan the struggles that come with being misunderstood. In the ever-fascinating ongoing series that The Secret History of Hollywood podcast is doing on Lewton’s career, Amy is revealed as not just a surrogate for Lewton’s daughter who he feels he has alienated, but as a subconscious stand-in for himself. His personal struggles were rooted in the creative frustration that came with being a brilliant artist tightly controlled by the studio system, but until he took his wife to a screening of Curse of the Cat People, he did not understand how he was taking it out on his family. In this sense, the film transcends the usual crowd pleasing Hollywood horror.

Among Val Lewton’s outstanding filmography, Curse of the Cat People feels like a unique turning point where Lewton thrashed against the binds of the restrictive system that limited his creativity. In that way, the mere conception of this film is not dissimilar from young Amy’s journey. It is not your conventional 40’s horror film, but nor is any of Lewton’s work. And while you are waiting for Curse of the Cat People to scare you, you may find yourself deeply moved.

0 comments on “Fright 20: The Curse of the Cat People”