“Brothers by blood. Sisters by name” is the tagline for French director Jacques Audiard‘s first outing at the helm of an English language film and for the director’s debut at the Venice Film Festival. Simple yet effective, this promotional tagline nicely summarizes the tumultuous fraternal bond that drives Audiard’s bittersweet western. 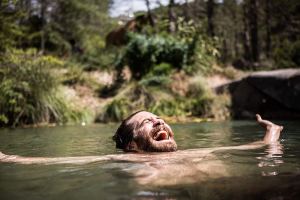 With multiple premieres sharing similar premises, the 75th edition of the Venice Film Festival appeared almost cyclical in its line-up. This western, however, could not be further from the The Coen Brothers’ comedic homage to the genre The Ballad of Buster Scruggs; Audiard’s film is a gritty, ruthless, dramatic noir.

The Sisters Brothers is very much a picaresque film about the human condition. The setting of 1850s Oregon allows for an exploration of morality and mortality, and criminal greed is juxtaposed against the optimistic idealism brought forth by the gold rush. John C. Reilly and Joaquin Phoenix star as the eponymous Sisters brothers working as criminal assassins employed by the mysterious criminal kingpin, the Commodore (Rutger Hauer). Elder brother Eli (Reilly) strikes a bumbling figure compared to the roguish, charismatic Charlie (Phoenix). It is clear that Eli’s continued involvement within the criminal world is purely out of a devotion towards his brash and impulsive sibling.

The premise of The Sisters Brothers sees the brothers undertaking a mission with their eloquent ally, John Morris (Jake Gyllenhaal), to assassinate Hermann Kermit Warm (Riz Ahmed) at the Commodore’s behest. The initial uncertainty as to why the Commodore wants Warm dead juxtaposed with the brothers’ ready acceptance to commit his murder establishes the pair’s pre-disposition for brutality. Audiard intends for the audience to accept the brothers as the ruthless criminals that they are; this film is no romanticism of the ‘wild’ west, and neither does Audiard excuse the brothers’ actions. The foundation for the brothers’ reputation as feared outlaws is effectively established when they drink, completely undisturbed, while the other residents cower outside. It is the early acceptance of the brothers’ unhonourable lawlessness which allows the film to make such an emotional impact later on.

Alongside the Sisters’ dependent fraternal relationship, an unlikely bond develops between Morris and Kermit Warm. It is this bond that is also pivotal to The Sisters Brothers‘ emotionality. Morris looks incredibly out of place in the lawless west; he is a wordsmith, and his eloquently written reconnaissance letters are often belittled by the uneducated brothers. Gyllenhaal, returning to the Western genre for the first time since the seminal Brokeback Mountain in 2005, excels as this affable criminal.

The revelation that the Commodore wants Kermit Warm dead only to obtain his chemical formula that highlights gold veins, is despairing as the power of greed threatens to eclipse academic curiosity and integrity. It is surprising, albeit pleasantly so, that Morris decides to abandon his nefarious task, free a bound Kermit Warm, and leave with him in harmony for the promise of starting a new utopian society in Texas. A lingering, private stare between the two, wordlessly hints at a potentially intimate relationship.

The wonderful thing about The Sisters Brothers is how it deviates from expectations. An obvious response to Morris’ betrayal would result in a climactic showdown between the splintered pairs, yet Audiard subverts this with a bittersweet sequence of brilliant cinema. After an initial rocky reunion between the foursome and a showdown with the Commodore’s men, Morris and Kermit Warm convince the brothers to stay and prospect with them before embarking on their new lives together.

From the incredibly touching response that Eli has to the death of his horse, Tubs, to the saddening revelation that Charlie murdered the Sisters’ abusive father – and the subsequent brotherly guilt that Eli feels in his position as the elder of the two – Audiard does his best for these male characters to openly discuss their feelings, breaking down the notion of toxic masculinity. It is a tad disappointing that this openness only occurs shrouded in a forest, but nevertheless, the image of these hardened men working together for a better future delivers a shining moment of hope.

Alas, it is but a moment. The Sisters Brothers never falters in questioning where the film will go next; for a gritty – albeit comedic – western, Audiard artfully maintains an even level of tension throughout. It is during the group’s night-time prospecting that this tension erupts. Kermit Warm’s chemical composition works brilliantly; the heavily diluted solution effectively illuminates the mineral veins, but it still is corrosive. This shining, unmined gold is the physical manifestation of Charlie Sisters: his criminality entraps a buried integrity as the rocks encompass the precious metal. When the solution begins to fade, however, Charlie’s fears so does his freedom. With a single, misplaced step, his attempt to recapture the effervescent freedom becomes a self-fulfilling prophecy as he extinguishes that golden, optimistic future of Kermit Warm’s devising. The aftermath of Charlie’s fearful greed is nothing short of horrific; one finds themselves holding their breath in shock. This is the gritty reality of The Sisters Brothers: life is, after all, unfair.Bad things happen to the even the most well-intentioned of people, and sometimes justice evades us.

To completely contrast the heart-breaking ending, The Sisters Brothers is a very funny film. There is a nuanced humour throughout that balances perfectly with the darker undertones; Reilly absolutely shines as both a comedian and a dramatic actor. One particular moment that deserves lauded attention involves a sleeping Eli’s gaping mouth and a very adventurous spider; a combination which for many is the stuff of nightmares. This moment in The Sisters Brothers elicited both horrified groans and guffaws from the audience, and unexpectedly held more tension that the entirety of Luca Guadagnino’s remake of Suspiria, which premiered in the Sala Grande the previous evening.

No film, however, is perfect. Audiard’s outspoken membership of the ‘50/50 for 2020’ feminist movement is extremely admirable, and with just one film directed by a woman screening in the main competition at the Venice Film Festival (Jennifer Kent’s The Nightingale), female representation both in front of and, even more so, behind the camera is far from where it should be. It is therefore disappointing when one considers the screentime that Audiard designates for his female characters. The Sisters Brothers is an adaptation of Patrick deWitt‘s novel of the same name, thus it is debatable on whether the lack of female screentime falls at Audiard’s or deWitt’s feet. Nevertheless, liberties could have been taken with the screenplay, which Audiard adapted in tangent with screenwriter Thomas Bidegain. The Sisters Brothers incorporates just four female characters, one of which is never seen on screen.  Unfortunately, these women are completely at mercy to the whims of the men. Mayfield (Rebecca Root), the iron-clad leader of the eponymous town, suffers brutality and death at the hands of the brothers due to Morris’ rebellion; Eli’s decision to be somewhat kindly towards Mayfield’s prostitute (Allison Tolman) by not abusing her is heralded as an act of heroic generosity; the Sisters’ mother (Carol Kane) remains a nameless and wordless figure that serves only to welcome the criminal brothers home to be doted upon – there is no acknowledgement of her husband’s murder. It is disappointing for a director that is so outspoken about female representation to provide very little in his own work- Audiard’s feminine characters are reduced to nothing more than ever-accepting playthings for the male characters: feminine nodding dogs set against a western backdrop.