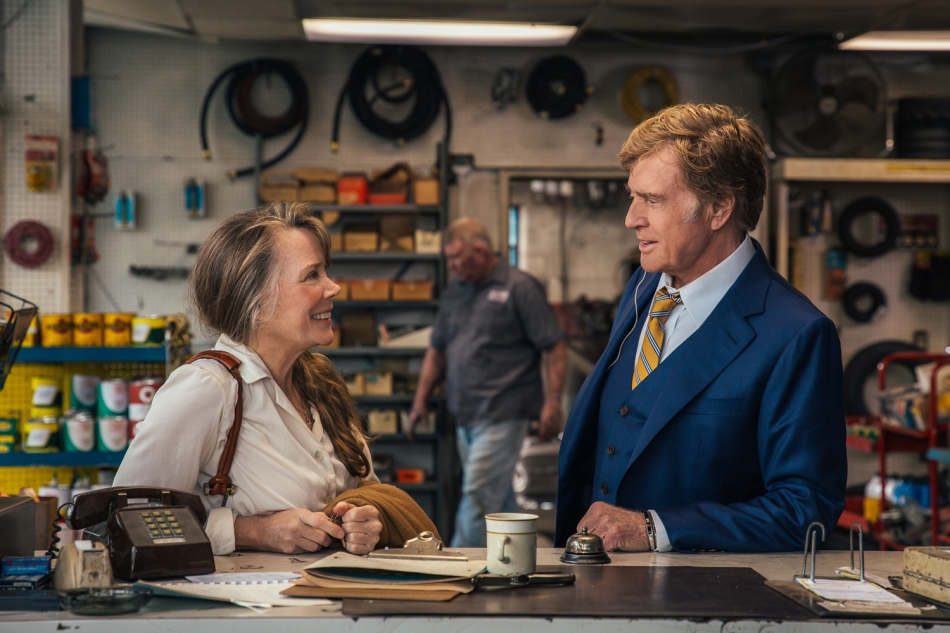 David Lowery loves the 1970s. His debut Ain’t Them Bodies Saints felt like the descendant of Terrence Malick‘s Badlands, while his follow-up Pete’s Dragon was a remake of a 1977 film. Though The Old Man & the Gun is set in 1981 – with some events shown in the 1970s – it is hard to not see it as being greatly inspired by the 1970s, especially with its grainy, weathered look. The film is centered on an old man, Forrest Tucker (Robert Redford), who has built up quite the reputation for himself, both as a gentleman and as a criminal. Yet, while the film does explore Forrest’s crimes, Lowery uses the film’s leisurely pace to take a breath in between, examining themes such as age, the passing of time, what it means to be “living”, and the nature of the cop-and-robber relationship.

Following Forrest as he robs banks with old friends Teddy (Danny Glover) and Waller (Tom Waits) and as he starts a romance with the widowed Jewel (Sissy Spacek), The Old Man & the Gun takes its time. Rather than going for cheap thrills, The Old Man & the Gun is more concerned with how Forrest operates and acts as a man, along with  his approach to his heists. He is not some thrill seeker out for a big adrenaline rush and neither is the film. He is merely  a lifelong criminal, having stolen since he was a teenager and having broken out of prison 16 times by the start of the film. He is just going about his business. Some people clock in at work. Forrest robs banks and runs from the cops. Both are approached with the same casual demeanor.

This is perhaps best represented by the opening heist in the film. Casually walking into a bank, handing the teller a note, and flashing his gun, the scene is approached with considerable precision. Not a piece goes awry, while Forrest talks calmly with the teller and reassures them that they will be alright. As he pulls out and starts driving away on the highway, the cops can be heard in the distance, but he hardly takes notice. Instead, he is more concerned about the woman, Jewel, he sees broken down on the highway. Pulling over, he helps her out, uses looking at her truck as a cover from the cops, and then he goes out to lunch with her. For some viewers, this may be a bit boring. However, for those willing to go along with it, The Old Man & the Gun’s slow pace pays off, giving its actors room to explore their characters in great detail. Redford is as charming as ever, looking back on his life- both as the character and as himself, in a way- while his romance with Sissy Spacek is incredibly charming.Both play with a wonder and starstruck quality that is usually reserved for teenagers.

The work of DP Joe Anderson is also crucial in creating this atmosphere, with his camera often focusing on the beauty of the mundane. For example, it focuses on Forrest riding a horse with a gorgeous purple sky behind him, as the camera tracks behind him. In the distance, the cops can be seen approaching. In another scene, he and Jewel sit on their porch, relaxing and talking about love with the camera panning to focus on the open green pasture in front of them. It soaks in every bit of peace and comfort that comes from living in this gorgeous, yet isolated location. 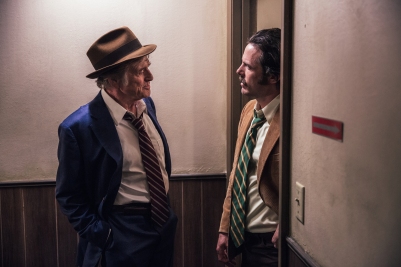 It is also a credit to editor Lisa Zeno Churgin that this atmosphere is created, as she is never too quick to cut a scene, instead letting it play out a little longer than usual to really bolster this relaxed feeling. The main exception is the film’s montage sequence of Forrest breaking out of prison 16 times that is a bit quicker paced to its benefit. Incorporating a few zooms, a great iris shot/transition, a striking silhouette chase scene through a tunnel, and even footage from Arthur Penn’s The Chase featuring Redford. All seamlessly flowing together with an impressive stylistic flair, the montage is constructed with an amusing comedic energy, bolstered by Redford’s dialogue in the scene.

The film’s pacing proves quite thematically intentional, capturing the slow ebb-and-flow of life while a surprising amount happens undetected. However, this theme is far more focused when it comes to the stories or events the characters face in the film. Much is made about Forrest’s age, as he is north of 70 and still robbing banks. He looks back on his life, works to get where he wants to be, and always ensures that he is happy. This reflection is also done by Jewel, who openly wonders whether or not she was happy in her marriage or simply content, while Waller hysterically recounts why he hates Christmas based on a story from his childhood. Even Detective John Hunt (Casey Affleck) is in a state of reflection, with the film introducing him as he turns 40 and putting him in a morose state for the rest of the film as he copes with this fact.

As the characters explain how they are and what they did with their lives, they all stare the same fate in the face: death. The characters consistently joke that Forrest is close to death while he even lives across the street from a cemetery. John is obviously coping with the fact he will never be young again and is halfway to death, while the other elderly characters try to find some way to look past the inevitability, and Jewel continues to deal with the death of her long-time husband. As time passes, The Old Man & the Gun continuously circles back to two questions. One: are these characters simply alive or are they living? Two: are they happy? In the end, actually living and being happy are the most important things, no matter what else happens, and each character is searching to achieve both. 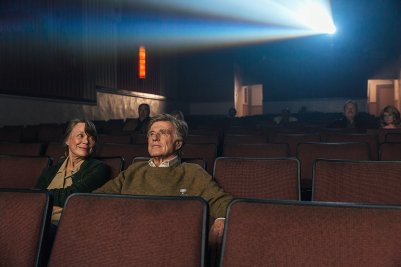 Unfortunately, this is where the film does falter somewhat. It explores the cop and robber relationship as John chases because it is his role and Forrest runs because that is his role. They love the sport of it, almost depressed when it has to come to an end and desperately searching for a way to make it happen again. John does find some way out of his depressive state through this and the help of his wife, but Forrest is so caught up in it that he never gets out. In this, the film gives him a pass for being incredibly selfish and narcissistic. The fact is he abandoned his wife and daughter and now abandoned Jewel in the name of fulfilling his thieving desires. The film plays his crimes for laughs, focusing in on how happy and cute it is that an old man would be robbing banks with nothing but polite manners and a gun he never uses. But, it seems to mistake this for being somehow redeemable, losing sight of the real pain he caused – though a scene with his daughter Dorothy (Elisabeth Moss) does somewhat highlight this. Nonetheless, the film is too quick to overlook his selfishness, giving him a free pass to indulge himself without really stopping to question his flawed moral compass.

Fortunately, The Old Man & the Gun is relaxing and, every once in a while, it is exactly the kind of film a viewer needs. With striking visuals from DP Joe Anderson setting the scene, David Lowery’s willingness to let the actors take center stage and explore their characters, The Old Man & the Gun possesses unique appeal. It is not too fussed about making itself thrilling or exciting, instead content to be somewhat funny, rather romantic, and a little reflective. It is not a runaway success, being a bit flawed in its characterizations and perhaps a little too slow at times but it is such a relaxing and fun watch that this does not hold it back too much. If this is truly Robert Redford’s final role, then it is a nice, soft landing that serves as both a good final film and a fitting tribute to an icon.