For many, British comedian Matthew Holness’ diversion into horror throughout his career may seem ironic, considering his effortlessly-quotable and adored work on Garth Marenghi’s Darkplace in 2004. However, it’s become clear over the years that horror has always been his passion, and the very reason that Darkplace worked so well was because of his penchant for the genre and its history. Over the last few years Holness’ comedy work has been restrained, replaced largely with short horror novels and televised genre pieces – eventually leading up to his feature debut Possum based on his short story of the same name.

Heavily inspired by his love of silent films from the 20s and 30s as well as the UK’s public informational films from his youth, Holness has managed to craft a deeply unsettling, almost purely visual experience destined to achieve the same cult status and adoration as his other work. Sean Harris (Trespass Against Us) plays Phillip, a disgraced and disturbed children’s puppeteer who returns to his ransacked childhood home for an unknown reason and is forced to confront the secrets that have haunted him since his upbringing. All the while, he is tormented and stalked by a terrifying spider-like marionette known only as ‘Possum’. Much like the short story upon which it’s based, Possum is incredibly light in plot as well as dialogue. It’s a sparse film to be sure, but one that had me gripped from beginning to end.

Set in the bleak, dystopian flatland of Norfolk, the majority of the film simply features an almost-silent Harris walking around in different states of distress carrying a large bag inside of which is the titular marionette. The locations are stunning, and provide the perfect backdrop for the events on screen by reflecting Phillip’s state of mind as well as the information the audience is able to gauge about the situation. Despite these elongated periods of little action or dialogue, the film never becomes boring, and instead relies on the actor’s body language and facial expressions to tell the story- much like the silent film era Holness is trying to evoke. It’s an experiment that works, for the most part, and benefits heavily from featuring an experienced and talented actor such as Harris in the lead role. Phillip is both haunting and haunted, reducing his physical presence as much as possible, the baggage he carries from his childhood wearing him down and slowly eating away at him. Harris and Holness work hard to ensure that the character remains morally ambiguous throughout the film, and I found myself more than once doubting his intentions in this psychological experiment on the effects of trauma and abuse. The story told here is in fact very little, but the presentation style and talent are on full blast for the majority of the film’s brief runtime.

The film’s soundtrack, composed by The Radiophonic Workshop, is noteworthy too. Taking inspiration from the schlock horrors of the 70s, Possum is filled to the brim with tantalising strings and ethereal drones that fill the space dialogue otherwise would have. Employing the ex-BBC outfit responsible for the majority of the creepy/disturbing soundtracks to sci-fi and horror serials of the 70s (such as Doctor Who) is a stroke of genius, and lends the film a nostalgic lens that strengthens its presentation tenfold. This is magnified by the film’s title sequence, with stylised technicolour snippets of film washed over by tranquil images of Norfolk’s scenery. It plays like a grindhouse-era British horror, and even though this feels a bit of a stretch from the rest of the film’s minimal presentation it’s a welcome sight.

Phillip’s uncle Maurice (Alun Armstrong) takes on the narrative heft of dialogue as the sole occupant of Phil’s childhood home. He sits in the kitchen and grins menacingly, but it’s never antagonistic. As Phillip’s guardian growing up, the pair’s two’s history is laid out to the audience almost immediately. Maurice’s presence reduces Phillip to his childlike state of mind and forces him to become obedient under a vale of sympathy. Their relationship is the strongest aspect of the minimal script and the best example of Holness’ wishful visual storytelling – again bolstered by having two acclaimed actors going head to head with one another. This method isn’t fully successful however. As the film builds towards its climax, Holness appears to be in undoubtedly confident. Twists and turns are brought into light through imagery alone, but it’s the film’s final scene that seems to betray this ethos by becoming reliant on dialogue between the two main actors. Whilst it doesn’t detract from the overall experience it’s a small falter in what had been up until that point, a bold and peerless portrayal of trauma. Possum leads the audience along, dangling one plot thread in particular throughout its runtime and gets so close at perfectly pulling the rug from under you that it then becomes frustrating that it isn’t able to fully stick the landing.

Then of course there’s the titular marionette itself. We’re never fully graced with its full appearance until around the thirty-minute mark, and until then we’re teased with huge sprawling spider legs emanating from the beige bag carried around by Phillip. Those with arachnophobia be warned, Holness makes full use of the disturbing imagery he’s able to muster using these sharp, thin limbs alone. They emerge from the screen’s edge, wrap around corners of dilapidated corridors, and pounce when you least expect it (yet the film never resorts to jumpscares). He knows how unsettling such images are, and they’re used sparingly to great effect. Sporadically placed across the film are a series of vignettes, postcards to another time that present themselves as an amalgamation of returning silent-film tropes and German expressionist horror, echoing the likes of such disturbing detours within Don’t Look Now. A handful in particular I fear will remain etched in my mind for weeks to come, though their presence is more fascinating and unsettling than outright horrific. 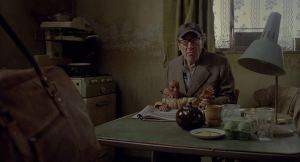 It’s the back and forth between Philip and Possum where the film shines. Because the audience is aware of his presence within the bag, we’re constantly drawn to wherever Phillip has hidden his marionette. Slowly Holness presents the idea of uncertainty and combines it with the protagonist’s moral ambiguity to craft an unsettling notion of Philip becoming an unreliable narrator. It’s here where Harris’ sharp facial features and reputation playing disturbed, often menacing characters begins to come into play and Possum uses this to its advantage whenever possible. Despite it having a clear physical presence and Maurice referring to the it, Possum itself is never notably literal in its presentation and instead flows back and forth between the metaphysical and the deliberate, strengthening its mystery and therefore making the film’s later depictions of nightmarish vignettes all the more unsettling. These are the snippets of nightmares you glimpse, however briefly, as your mind wanders just before you drift off to sleep. Only for Philip the glimpses may not be so short. Production designer Charlotte Pearson and cinematographer Kit Fraser combine their talents to make sure that Philip’s waking hours are just as haunting as his sleeping ones. His childhood home is a brown daydream of damp despair with boarded up windows, rotten walls and a stench that flows from the screen. All of these elements work in harmony to create the film’s biggest asset- it’s heavy atmosphere, one that enriches the experience wonderfully.

Possum seems destined to become a cult classic psychological horror, and will more than likely take place sitting proudly beside the likes of Session 9 and even more mainstream titles like The Gift. Holness is reportedly already at work on his second feature, and here’s hoping that he’s able to also bring his clear talent for writing dialogue and characters to his next endeavour, as here he already displays masterful construction of tone and atmosphere as well as the ability to delve into the imagery of the unnerving, something many horror director’s fail to even achieve throughout their entire careers. It seems as though much like his pastiche of Stephen King, Garth Marenghi, he may have set the groundwork into becoming a future “titan of terror” indeed.