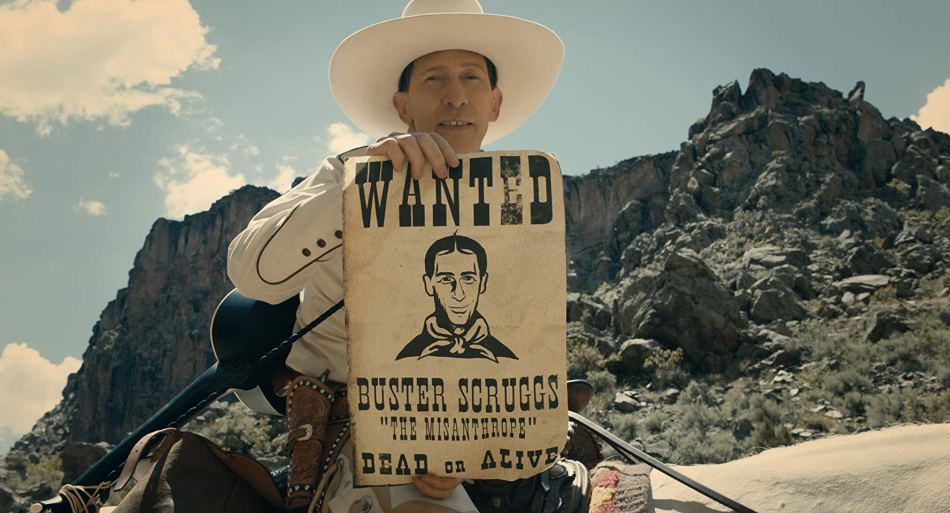 Joel and Ethan Coen have long expressed an interest in spirituality and mythology. From their parable on Judaism A Serious Man to their Odyssey send ups O Brother Where Art Thou and Inside Llewyn Davis, the Coen Brothers have explored age old questions in understandable discourse. In The Ballad of Buster Scruggs the duo generate a similar dialogue relating to the Grim Reaper. The anthology Western is an exploration of death as a universality through a colorful lens. 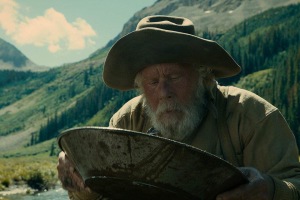 The Ballad of Buster Scruggs is a movie in six parts. Rumored to be conceived as a mini-series, the film has six discrete stories, separated neatly by the literal image of a book moving through individual chapters. Though the characters have no overlap and the settings are only common in the broad sense of the “old West”, there is a strong thematic throughline. The film continuously revisits the topic of death both with humor and with deep sadness. The Coen Brothers remind us not just of the certainty of death, but of the uncertainty of it. Just as viewers may find themselves shocked and saddened by the demise of one character, they may be equally surprised at the survival of another.

Throughout the film characters must cope with death both in terms of their own lives and the lives of those around them. Some are admirable while others seemingly deserve their fate. The titular Buster Scruggs (Tim Blake Nelson) is a wanted man who murders with no regard for the sanctity of life. Alice Longabaugh (Zoe Kazan) is an innocent girl coping with the death of her brother and discovering young love for the first time when she is confronted by a warring group of Native Americans. This theme is tied together nicely in the final sequence which features a group of five strangers in a stagecoach. At first seeming to call back to the classic John Ford western Stagecoach, the exchange between the group quickly evolves into a surrealistic fantasy which more closely resembles Victor Sjöström’s The Phantom Carriage. The whole sequence has the strange feeling that we may be seeing our characters escorted to the afterlife as the film offers no firm reason that their coexistence in the stagecoach makes any sense. Though no supernatural element is confirmed, the feeling is certainly there and those familiar with cinematic imagery of the afterlife and its general cast of characters might catch on to some obvious symbolism.

The various segments of The Ballad of Buster Scruggs vary in tone from outwardly comedic to intensely dramatic, with most chapters falling somewhere in the middle The titular segment, for instance, is almost outrageously silly while the James Franco-starring Near Algodones segment is decidedly tense. The Coen Brothers even play with some interesting narrative modes with segments like Meal Ticket which features Liam Neeson in a a chapter where the story is driven by almost no dialogue. 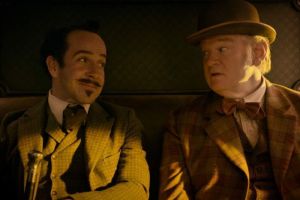 Given the anthology nature of the film, there are some issues with unevenness. While certain chapters leave a large impression, others are entirely forgettable. In reflecting on the film mere minutes after watching it, I had entirely forgotten about the Near Algodones segment prior to pulling up a cast list and seeing Franco’s name near the top. Perhaps this is because the chapter is early in the film, but it does feel like a couple of the stories included here fall flat in retrospect. The fact that the thematic connection is not made apparent and there is no narrative tying the sections together may make segments like this somewhat exhausting.

I go back and forth on whether The Ballad of Buster Scruggs would’ve been better off envisioned as a mini-series rather than a feature film. On the one hand, the thematic throughline does pay off in the end in a way that is effective and satisfying. On the other, the process of watching the movie often feels somewhat disjointed, with the different sections failing to carry any significant tonal consistency. While reflecting on the full work certainly justifies the feature presentation, many viewers may find the actual viewing to be a bit tedious and confusing. I have a feeling that The Ballad of Buster Scruggs might’ve been better received by popular audiences if presented episodically.

Still, The Ballad of Buster Scruggs is a solid effort by The Coen Brothers. It is a fun film that challenges its viewer in terms of style and content. It is certainly not without its flaws, but by my estimation it marks a significant bounce back from the ill conceived Hail, Caesar! It is a memorable entry in the small Western resurgence that the Coens helped to initiate with films like No Country for Old Men and True Grit and I am confident that, like many other Coen Brothers movies, it will age well as audiences have a chance to revisit it over the years.

0 comments on “The Ballad of Buster Scruggs ★★★”