“[He’s] a hyper-intelligent child who is slightly disturbed, playing with dolls in a dollhouse, cutting their heads off with nail clippers.”

Such characterizations of von Trier seem to surface around the release of his every film, and their fairness is always debated with fierce vitriol from critics and fans alike. But perhaps never before has von Trier- a filmmaker whose work has always been as aggressively pessimistic and misanthropic as it is polarizing- embraced such an unflattering portrait of himself than in his latest, the thrillingly deranged statement of artistic intent, The House That Jack Built. 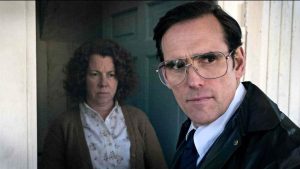 As befit most von Trier excursions, The House That Jack Built is divided into distinct chapters, this time into five “incidents” announced by title card. These five incidents are vicious murders, recounted calmly by the titular Jack (Matt Dillon) to the mostly unseen entity of Verge (Bruno Ganz), all along a quite literal journey into Hell. Jack is a serial killer, a Patrick Bateman-type with a rugged, clumsy, and even socially awkward demeanor; he is far more an idiosyncratic surrogate for von Trier than any abstraction or object of satire. Among other things, Jack deems himself an architect (not an engineer), artist, and tortured soul. He dubs himself “Mr. Sophistication”, and considers his grisly acts of savagery works of art far too highbrow for traditional morality and understanding. If this sounds an awful lot like how von Trier approaches his films, that was the intended effect. In fact, von Trier has stated on the record that out of all his characters he’s ever written, he identifies most strongly with Jack (an admittedly ridiculous statement but one that should nonetheless shock no one).

And indeed, von Trier allows his own anxieties and artistic notions of grandeur bleed into Jack as a character. In his second “incident”, Jack is revealed to be afflicted with obsessive compulsive-disorder, stricken with restless visions of bloodstains he forgot to clean up that force him to repeatedly revisit a crime scene. It’s one of the most absurdly amusing scenes in the film- Ganz’s Verge even expresses his flabbergast over the notion of a serial killer with OCD- and the fact that von Trier includes it purely to poke fun at his own OCD makes it all the more genuine. This isn’t to say the film is a complete self-roast; at one point, Jack ironically goes into great depth on the guiding philosophy of Nazi architecture and Albert Speer, taunting critics of von Trier’s 2011 Cannes debacle and doubling down on the wild, half-joking assertions he made there.

And there are many moments still where the film is used more seriously as a meditative mirror for von Trier to stare long and hard into his own soul and career. As Jack’s murders become riskier and more sadistic, the psychopath seems strangely vexed that he has not been caught and punished. He must be divinely blessed, he ponders as a literal trail of blood linking him to a crime scene is washed away by unforeseen rain. Eventually though, Jack arrives at the conclusion that it is instead the sickening apathy of humanity that allows his crimes to continue. One has to wonder, while observing Jack’s self-destructive willingness to get caught, if von Trier doesn’t feel a twinge of guilt that his art, that his misanthropic depiction of suffering (especially that of women) hasn’t been punished, that he is continually allowed to make such films.

Yet at the same time, Lars von Trier has made it abundantly clear throughout his career that he believes wholeheartedly in total artistic freedom, specifically the ability to depict anything in film- no matter how foul. He, like Jack indicates to Verge, seems to reject the notion that all art must fit snugly in a square of positivity and affirmation in the good in humanity. The overwhelming sense leaving Jack is that von Trier believes that for art to be a genuine expression of the human condition, it must also give equal consideration to the worst, most evil impulses of our species. Even with such a seemingly confident (albeit not particularly original) philosophy towards art, von Trier is nowhere close to understanding his own artistic impulses, and ultimately it is that pesky demon that plagues him the most. In one particularly telling scene, some of the most extreme sequences of destruction and violence in von Trier’s previous films- Breaking the Waves, Dogville, Nymphomaniac, and Antichrist, among others- are intercut against Jack and Verge’s intellectual dialogue.

This sense of self-doubt extends to a long-awaited self-acknowledgement of the alleged misogyny found in the director’s work. As naturally as a still-life painter might choose to focus on pears, von Trier has long obsessed over the images of women in physical and emotional anguish. Much of the criticism of his work can indeed be summarized as an angry defiance of using women so frequently as simple artistic icons to be smashed. It’s somewhat surprising, then, that The House That Jack Built is perhaps one of von Trier’s first and only films to address this criticism. The most obvious confession comes somewhat late in the film, as Verge condescendingly questions Jack why all of the women in his stories are so dumb. Is Jack, through his stories, somehow trying to assert that all women are unintelligent? Is von Trier, through his incessant depictions of female anguish, somehow projecting a subconscious hatred of the other sex?

The question isn’t whether Jack is a misogynist (that much is abundantly clear and furthermore irrelevant), but ultimately why Lars von Trier seems to feel the need to place his female characters in extreme duress for the sake of art. Whether the inclusion of such questionings is an indication of von Trier’s guilt of depicting women this way or merely a sardonic rebuttal of such claims may be impossible to know (at least on a first watch), but it’s a satisfying question to watch the director finally grapple with nonetheless.

At the end of the day, The House That Jack Built was never going to be the type of film to garner new fans for von Trier, nor one to reconcile with his critics. It is, however, a wholly unfiltered statement from a true auteur, with all the sloppy uncertainties and idiosyncrasies such a singular vision entails. Its appalling depiction of the worst in human behavior will undoubtedly turn away most, and evoke reactions ranging from mere distaste to downright hatred. Though I don’t share such assessments, I can’t make it clearer that I wholeheartedly empathize with and understand those who can’t bear to even look at von Trier at this point. But for those of us still capable of stomaching such an undiluted stream-of-consciousness, warts and all, Lars von Trier has proven once again that he remains one of the most artistically compelling voices in cinema today.