Ben Is Back and Beautiful Boy will find themselves connected at the hip as both follow the experiences of a parent and a child as they traverse the minefield of addiction. Whereas Beautiful Boy follows a father and son’s experience over the course of a few years, Ben Is Back follows a mother and son over the course of just 24 hours. In this, their approaches differ. Both find the parents coming to realizations they cannot save their children, but while Beautiful Boy traverses the ongoing struggle of recovery, Ben Is Back surveys the challenging ghosts created in the wake of addiction, preventing recovery. Opening with a shot of a rather typical small town, Ben Is Back explores these ghosts and demons that lurk in the shadows for addicts when they return home after some time away.

Writer and director Peter Hedges excels in shining a spotlight on these issues that refuse to let Ben Burns (Lucas Hedges) become clean. As he sits in the passenger seat with his mom Holly (Julia Roberts), he points out a house where he used, a house he robbed, and the house where his history teacher lives, the one who he “had an arrangement” with that got him oxycontin. At church, the mother of his girlfriend Maggie – who Ben got hooked on drugs, only for her to overdose- is there. At the mall, he sees people he knew in the drug world. At a meeting for addicts, he runs into a girl he sold drugs to during his time as a dealer. His problems in this film are brought on by his past as a dealer, with his former boss unhappy that Ben stopped selling for him. In his home, drugs he hid months or years ago still lurk in hidden corners. Temptations, threats, and memories have turned his family home and his town into nothing but constant reminders of his pain, along with the pain his addiction has caused others. It is an emotional weight, akin to a never-ending stream of suppressed memories that flood his mind, offering no escape for Ben.

Ben Is Back finds considerable power in this element, exploring his survivor’s guilt and his remorse, especially with regards to the lives he affected. Though Holly is willing to give him a pass for getting people like Maggie hooked- she reasons that “his truth” was that it was good and he just wanted to share that- Ben is not quite as willing to forgive himself. He sees the welcome he gets from stepfather Neal (Courtney B. Vance) and sister Ivy (Kathryn Newton) as reason enough to not forgive himself. They may love him, but they are all scared of him. Holly even goes so far as hiding all of the medication in their home when he surprisingly returns from rehab. It is as though this family is being stalked by death. Whether  Holly takes Ben to a graveyard to ask him where he wants to be buried or as Maggie’s mom, Beth (Rachel Bay Jones), gives Holly narcan, the end is always acutely in the mind of everyone in this film. Everyone seems to view Ben as a ticking time bomb, liable to explode at any moment and, for him, this is a hard reality to face. 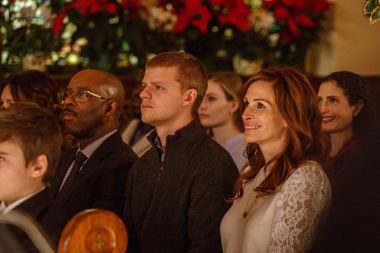 As with Beautiful Boy, Ben Is Back exists in the shadows of lost potential. Just as the father in that film hung photos of his son on the wall and later removed them to try to forget what was lost, so too do the parents in Ben Is Back. At a time that typically means togetherness, happiness, and family, the “Christmas spirit” is running low as families can only see what has been taken from them and who is missing. The streets are littered with people on drugs. The homes that line that street are not full, as Ben is not the only one with this problem. Peter Hedges aims to bring this tragedy home, to show the “normalcy” of the Burns family. One can see their nice home and the fact they go to church just once a year as relatable to the modern middle-class family. Yet, as Holly learns and as the film shows, they share one other similarity with many families: the opioid crisis has driven a spike through their once happy home. It is a tragic, gut wrenching film to watch as one can see the shadows of the once bright, happy children who made up this town. They are the faces Holly remembers and the ones Beth mourns. Their memories line the streets, along with the places they once frequented, to serve as a constant reminder of who is not at home this Christmas.

Together, Julia Roberts and Lucas Hedges are phenomenal, with their characters’ bond built through their performances. As Roberts simply rests her head on his shoulder or he speaks about their time together, the reaction on her face seems so authentic. It is a credit to Roberts’ skill that scenes of Holly yelling or breaking down in tears never feel overly performative, rather they emerge out of her as though a gaping wound was just poked with a sharp knife. As Roberts herself is a mother, it is no wonder she is able to tap into that level of empathy as Holly goes to the ends of the Earth to find her son and to help him. It is this heart and honesty that makes the performance succeed, as her desperation and unshakeable love shine through. For Hedges, he is similarly strong. It is a less emotional performance than Roberts, with Hedges obviously bottling up those feelings inside, letting them out in little inflections in his delivery and physical performance. It is subtle work, but an incredibly effective performance, capturing his doubts and daily struggle to resist temptation.

While often emotional and a stirring look at drug addiction, Ben Is Back does struggle at points. Unfortunately, one of the major issues with the film also dominates about half of its runtime. The issue is finding the family dog, Ponce, who has been kidnapped by someone who wants revenge against Ben. It is an obvious excuse to push Ben to reveal his life via exposition- not necessarily a flaw- but it distracts from the more character-driven elements of the film. Indeed, it winds up overplotted as the tension of trying to find the dog begins to cloud the tension facing Ben’s return to the family. It is as though the awkward return home is abandoned in favor of this side plot, quickly wrapping  up once Ponce is safely in their possession.

Some of the more out-of-place elements that come up throughout Ben Is Back find Holly confronting those she holds responsible. Whether it is confronting the doctor who prescribed her son “non-addictive” opioids or a pharmacy that does not stock narcan because it “encourages drug abuse” (but gives out syringes/drugs without question), the dialogue can be quite on-the-nose. It does highlight the abuse committed by doctors and it smartly criticizes pharmacies that enable this epidemic, but it feels too preachy in this. It is a worthy message, but it needed more finesse, even if watching Julia Roberts tear into the doctor proves quite entertaining.

An at times flawed and overplotted film, Ben Is Back is nonetheless a good and empathetic look at the opioid crisis. Taking a more limited approach than Beautiful Boy – one day in the recovery process versus months/years of the recovery process – Ben Is Back shows the everyday struggle that occurs, especially when living in the shadow of the places that bring back memories of drug use. It is a film that lives in this darkness, exploring every hidden crevice and all the ghosts lurking inside. There is no happy ending here, and Ben is certainly not over his addiction in the end, instead facing the same temptations, thoughts, and issues of the film’s beginning. It is not even particularly optimistic about whether he can actually overcome his issues, leaving on a sort of cliff-hanger. It is a tragic reality that Ben Is Back captures, one that often feels like perpetual tightrope walk, fraught with bumps and precarious steps along the way.