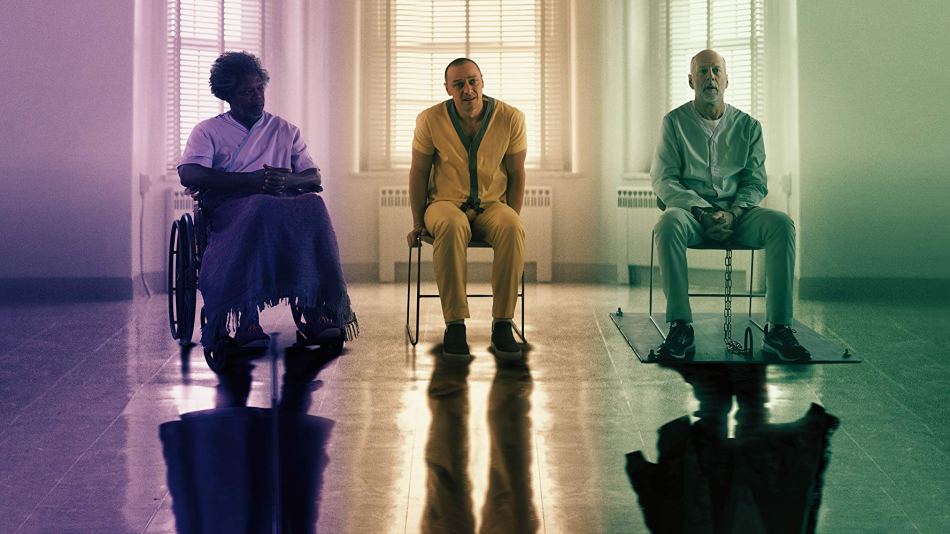 M. Night Shyamalan is one of the most perplexing filmmakers currently working. It’s common knowledge now that after a blisteringly-good start to his career his later efforts saw the quality in his work dive lower and lower. He soon became synonymous with criticism, and it wasn’t until indie found-footage horror The Visit in 2015 that he seemed to regain some of the originality that was present in his earlier work. Following that with 2016’s Split, a secret sequel to his grounded superhero film Unbreakable, and it seemed as though the man who loves twists seemed to finally be getting his mojo back.

Glass is the supposed long-time-coming finale to his ‘Eastrail 177 Trilogy’ – telling a more realistic take on the concept of superpowers and focusing more on the people behind them. Bruce Willis’ David Dunn/The Overseer with his superhuman strength and invulnerability is still played with a restrained hand, Dunn’s reluctant vigilante exists purely because of his belief in what’s right and wrong more than a personal interest in having an outlying effect on society. Samuel L. Jackson’s Elijah Price/Mr. Glass, with his super intelligence and brittle bones, sits sedated within the walls of a mental institution and James McAvoy’s Kevin Wendell Crumb/The Horde, a man with 23 different personalities, continues his streak of kidnapping teenage girls and sacrificing them to his master identity ‘The Beast’.

Part of the reason Split actually worked was merely due to McAvoy’s committed performance. Deftly switching between personalities within the same elongated shot, you’re soon reminded how much fun it is to see the actor at work. It’s a shame that his primary antagonist personality is perhaps one of the least interesting aspects of his character, but even then it’s a startling physical transformation over the mental ones of his other portrayals. There’s an overlying feeling that Shyamalan is more interested in his Split creation than the leftovers from Unbreakable too, which makes sense due to it allowing him to have more fun within the writing process but it often means that this comes at the expense of two other beloved characters.

The film’s first half hour is arguably its most comic book-esque, as Dunn and his now-adult son Joseph (Spencer Treat-Clark) have a kind of lowkey Batman/Alfred dynamic whilst searching for The Horde. It’s a tightly compact generic good vs. evil story that’s a pretty neat and clean reintroduction to not only the world of Split but a reminder of the tone that’s resurfaced from Unbreakable. Upon being caught by authorities, the two ‘superheroes’ are taken to a mental institution alongside Elijah, and are put under the watchful eye of Dr. Ellie Staple (Sarah Paulson) who specialises in a specific delusion of grandeur in which people believe themselves to have superpowers. As soon as the trailer for Glass came out I was charmed by this concept. Simultaneously poking fun at the cluttered superhero genre of the modern filmscape whilst retaining its own identity, Shyamalan seemed to know what he was doing plotwise. As soon as the institution is revealed and the three protagonists are locked up, the film’s pacing comes to a grinding halt. Gone are the genre conventions and brief moments of action – the distractions from the Shyamalan’s clunky dialogue and consistent, yet strangely cold direction. His camerawork is clinical, with a bombardment of static shots and CCTV footage which, instead of helping to ground the film in reality simply serve as reminders of how… mundane what’s going on is.

There are some nice ideas of course. The notion of the institution obtaining a light system that forces Kevin to change persona is absurd but brilliant, though at points it feels as if you’re watching an extended version of McAvoy’s acting showreel. We all know by now how talented the man is, and we’ve seen all of this before in the far more tense Split, where his performance was bolstered under the guise of the film’s horror aesthetic. If used correctly, this could have strengthened Dr. Staple’s ideology tenfold; Shyamalan’s script requires the audience to truly believe that these three men, who we’ve seen do the impossible already, could actually be deluded. The closest it comes though is to just have Willis and McAvoy state that they believe it. Willis’ Dunn is naturally passive, and such an emotional realisation needed extra effort from the actor in order to bring the idea home.

Jackson’s titular Mr. Glass isn’t fully allowed to be unleashed until halfway through the film, but when he is he soaks up the screen and the interplay between him and McAvoy’s villains are possibly the best thing about the film. Their mind-and-muscle dynamic as they revolt against the doctor and the institution to prove to the world their abilities highlights the best thing about Shyamalan’s trilogy. The ideas. The film constantly feels as though it’s building to some earned climax yet never fully reaches its potential, squandering it over the formalities of the reality which these people are trying to escape. Both Anya Taylor-Joy and Charlayne Woodard return as Horde survivor Casey and Elijah’s mother with little-to-no reasoning apart from connecting the stories together. Taylor-Joy’s Casey perhaps helps the film regain an emotional impact due to her complicated relationship with Kevin, though even this feels wasted during a messy and oddly-framed climax outside the institution.

As Mr. Glass and The Beast prepare to escape to the city, Dunn embraces his powers and vows to stop them before being caught in a crossfire with the police. Glass’ small budget and minimal aesthetic feel like a hinderance more than anything here: action is stilted and the presentation of shots combined with the slow editing makes for constantly uncomfortable viewing. Fight scenes between Willis and McAvoy seem to go on forever as the two simply grip each other’s necks and grunt for elongated periods of time whilst Jackson watches on smirking to himself. Sure, there’s a cool sequence of The Beast galloping across the garden towards Willis, but none of it feels climactic. I kept expecting the characters to actually make their way into the city in order to complete their plan.

One of the film’s twists during this climax fits into the narrative and manages to bring the story together nicely, even if it is done through exposition. The other, as the armed forces are brought into the battle, feels like a slap in the face. Shyamalan suddenly decides to chuck a whole new storyline into the mix with no prior warning or context, cheaping the experiences of every character up until that point and trying to wrap the trilogy into a prelude into some larger and even more mundane story. For a filmmaker who has now crafted a trilogy of films that work as an antidote to the spectacle and effects-laden action of the superhero genre, Shyamalan seems to give into the primal urge of cowering behind the idea of a ‘big bad’ villain which presents an alarming and unneeded tonal shift.

Unbreakable was made during a time when comic book movies were considered niche, and strangely enough that heightened the film’s dramatic purpose. Without that here though, Glass feels without purpose. It’s not the follow up to Unbreakable many fans will be wanting. It lacks the suspense that made Split a tight thriller. Shyamalan attempts to focus on the theme of identity, and how we’re able to define ourselves by our actions instead of the labels assigned to us. The only problem with that is half the film’s dialogue consists of Sarah Paulson’s technobabble justifying those very same labels. The trio at the film’s core do little to prove her wrong, even with a shoehorned positive message in the film’s epilogue. It’s probably best to remember the two previous films as standalone entities, because the outcome for all involved only breaks down their reputation.