The first film from writer/director Neil Jordan since Byzantium (2012), Greta is a welcome return for the Irish filmmaker. For his return, Jordan unearths a 1990s-style psychological thriller in which a normal relationship suddenly develops abusive and dark undercurrents lead to full-on terror. In Greta, that relationship is between Frances (Chloë Grace Moretz) and Greta (Isabelle Huppert). A 20-something who just lost her mom, Frances lives with her friend Erica (Maika Monroe) in a stylish apartment in Tribeca. One day she finds a handbag on the subway and returns it, starting a friendship with the bag’s owner, Greta. Upon discovering that Greta has a lot of bags with the same “personal” items inside, what starts as a mother-daughter type friendship morphs into a creepy stalker situation. While undoubtedly trashy and often cliche, Greta is a fun throwback that is elevated by a smart script, its tension, and great performances. 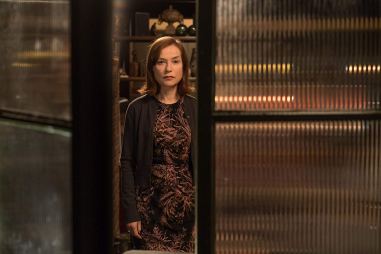 Early on, Neil Jordan tips his hand as to what kind of film Greta is going to be. Introducing Frances and Erica, Jordan has them discuss the possibility of having asparagus juice shot up their butts. According to Erica, it comes highly recommended as a “cleanser” though Frances is a bit more… hesitant. In other words, this is not a high-class thriller. It never tries to be, leaning into these cheesy and casual conversations that make for a good time. From the outside, the script can easily be seen as poorly written or silly, but that is precisely the point. The film is unafraid to embrace its leads as two 20-something year olds looking for a good time. They talk about frivolous and goofy things. Their interactions, even discussing serious things, are campy and irreverent. It is entirely self-aware, playing up these conversations into dry comedy while winking at the audience in the process. However, Greta never loses sight of the bond between Frances and Erica. Maika Monroe excels in the tongue-in-cheek portion of the film, while her chemistry with Moretz helps the more genuine side come off effectively. Though cheesy in presentation, the strong character building in this first act allows for a great representation of female friendship that carries on throughout the film.

While the writing is oddly charming, Greta can become rather choppy. Not only is the relationship between Greta and Frances quickly put together, but the first half of the film begins to feel too quick. The editing gives the opening half very little room to breathe, cutting scenes short and skimming through the character development and build-up. It slows down and gives scenes more time towards the end but until then, Greta is frantic. It clashes with the tone and laid back atmosphere of the opening, adding an urgency that makes it feel as though it is racing to the thriller scenes. This urgency never quite matches the importance of this build-up, sacrificing possible depth and atmosphere in the name of rushing through it to get to the more unhinged parts of the film. 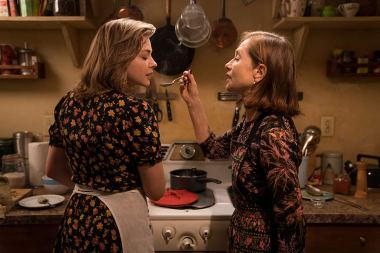 Nonetheless, once it gets to those parts, Greta is richly entertaining. As in the first act, Jordan may be building out a realistic scenario of a woman preying on a young woman’s kindness but he infuses it with camp. Isabelle Huppert knows that this is the case as she nails the repressed crazy that Greta possesses, but also embracing the campy side of the film. She is capable of turning on a dime from shooting somebody to dancing around her apartment with music playing. It is simultaneously chilling and hysterical, playing as a fun rendition of a classic pulp story. Jordan knows the audience has seen this type of film before, playing on that familiarity in spots but largely embracing it with a crazier-than-usual villain and a magnificent Huppert in the role.

While it could be even crazier, Greta really finds its stride as it indulges in Greta’s warped world. A lot of this due not just to Huppert, but to Jordan and Ray Wright‘s script. The writers’ knowledge of the thriller formula front-and-back benefits the film greatly. It creates incredibly efficient thrills, setting up and paying off plot and set pieces with great effectiveness, while also finding smart places to subvert expectations. The treatment of one character in particular is a great example of these subversions, while Greta deftly executes all of its expected setups in consistently rewarding ways. Jordan is never content to leave a pay-off scene as merely that, adding elements that make the scene even more horrifying while keeping the audience on their toes. One may expect the piano, the locked door, or the box to come into play once introduced, but how Greta comes back to them is impressive. The locked door is a great example, coming off the heels of one of the more explosive scenes in the film, directed with a frantic and chaotic pace that will have audiences shouting at the screen in excitement and terror. While it can often be cliche in its overall adherence to formula, Greta never loses its effectiveness. When it wants to be, Greta is tautly executed thriller that smartly blends in campy fun, making for a greatly entertaining experience.

The film also infuses technology for some of its most effective scares, creating one great set-up in particular as well as an interesting thematic side. This scene comes as Erica is at a bar alone while Greta texts Frances photos of Erica. As Greta chases her and takes photos, the scene is impressively directed with great suspense and smart cross-cuts between Erica’s POV, Greta’s POV, and a desperate Frances racing to the bar. It seems all to all be building to a climax, one that Jordan approaches in an unexpected manner. Phones come back again later via a vacation misdirection that not only feels quite realistic but incredibly chilling, allowing for Jordan to somewhat parlay Greta’s terror into a comment on stalking in the digital age. As Greta uses Facebook and old photos on Frances’ phone to her advantage, her desire to stalk and harass her becomes even easier. Overwhelmingly, Greta is a look at an abusive mother replicating her abuse on unsuspecting strangers. But, Jordan smartly jumps off from this to show how this type of terror has changed in a truly haunting way. One can never truly escape or cut someone off if that person does not wish to go away, able to use social media or technology to find terrifying ways of inserting themselves back into their victim’s life.

Greta is a film most viewers have seen before. In the hands of writer-director Neil Jordan, it never feels fresh but it is nevertheless fun and effective. The thrills excel in a typical setup-payoff structure, while Jordan finds some room to play around and wink at the audience. For some audiences, this self-aware nature will be annoying or perhaps not go far enough. However, Greta effectively balances its camp with its suspense to make a frequently chilling and shocking film that also manages to be quite funny. A magnificent performance from the sinister Isabelle Huppert, a capable lead from Chloë Grace Moretz, and a wonderful turn from Maika Monroe only add to Greta’s charm. It will certainly not be for everyone, but for those who enjoy cheesy 90s-style psychological thrillers, Greta is a welcome throwback.