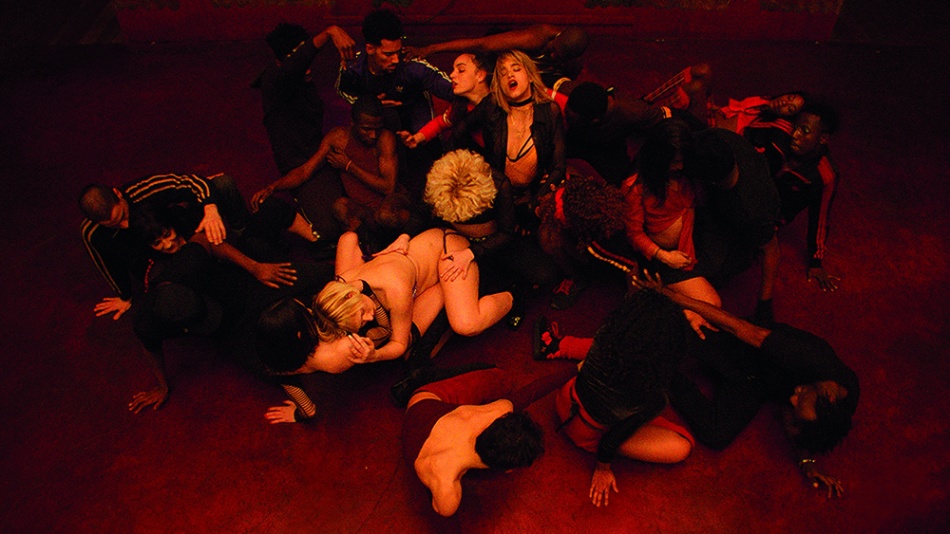 “[…] The thing about taking MDMA is you take it and you release serotonin without swimming, without dancing, without making love, so you have the chemical or hormone epilogue without having the before. […] You can enjoy it and you feel relaxed but also you have a headache the next day.”

There’s assuredly more than one string of comparisons to be drawn between the act of watching the work of Gaspar Noé and taking drugs (Enter the Void is one of the trippiest films this critic has seen), but the quote is as apt an approximation as any for his latest psychedelic nightmare to grace the silver screen. Climax is only Gaspar Noé’s fifth feature film, and though it bears a strong stylistic resemblance to his previous, perhaps more substantial works, it’s certainly his most fun movie yet. Indeed, the terrible joy of seeing Climax in a theater is far and away the most exhilarating experience I’ve had at the cinema in quite a while, existing somewhere between the tentative energy of a party and a rollercoaster. I entered the auditorium with nervous excitement and stumbled out 95 minutes later in a peculiar balance of invigoration and hungover exhaustion. I had a headache, but it was a most enjoyable and well-earned headache.

Climax, like 2002’s Irréversible, transpires over the claustrophobic course of a single night gone wrong. After a series of prologue interviews with each of the characters, the film drops like an atomic bomb on a troupe of experimental dancers rehearsing their latest number. In one coherent take, the camera presents the troupe in all their magnificent glory, swimming around them and soaking in every anxious, pulsating move with a positively lustful magnetism. There’s a sense of internal emotional logic driving each dancer in how they assert themselves, a narrow window into their most vulnerable desires that’s only briefly visible within the framework of the dance. The controlled chaos of every inexplicable step and physical inflection is electrifying- a breathtaking high to enter any film on, and quite possibly the best single moment Gaspar Noé has ever shot.

We learn more about the group as they break to party, the flowing handheld cinematography- much like ourselves- still coming down from the euphoria of the film’s rapturous introduction. We eavesdrop on each character’s wants and frustrations before watching them dance, individually, in a series of blinking high-angle shots. Slowly but surely, something starts to feel wrong. The camera remains unwaveringly suspended above the communal dance floor, but begins to rotate, exploring this new dimension of circular momentum with a rising sense of foreboding. The music, once a channel for youthful bliss, develops an anxiously menacing tone; the loud crimson hue of the floor suddenly looks ghastly, a sickly symptom of the group’s growing unease. Only then, literally halfway into the film, do the signature Gaspar Noé opening credits finally rear their head (projected gloriously over the empty dance floor with the same manic psychedelia of Enter the Void) as a sardonically sinister signal of the real fun to follow.

And what fun it is. It doesn’t take long for the group to realize the sangria they’ve been drinking has been spiked with LSD, and it takes even less time for all of them to start turning on one another. The remaining 45-minutes can best be described as a New French Extremity rollercoaster, a demented funhouse with its occupants divided firmly down the middle- half in euphoric bliss and half in perpetual terror. As an observatory audience member, it’s a sadistically delightful spectacle to watch everyone lose their mind. Moments of terror, disgust, and genuine tragedy abound, but the film’s sly sense of twisted humor is laid over its foundations just delicately enough to soften its most horrifying imagery. Rest assured, Climax is no Irréversible– you won’t be traumatized for life by allowing yourself to enthusiastically engage with this hallucinogenic voyage.

Nor is Climax even comparable to Enter the Void, despite their superficial connection to one another via psychedelic drug use. Unlike that film, we aren’t watching events transpire through any particular character’s point of view, and we don’t experience their terrifying trip firsthand. The camera does follow Sofia Boutella‘s character Selva for a significant portion of the runtime, but we never know exactly what she is seeing. Fortunately, we don’t need to, since Boutella does such a fantastic job of conveying her character’s warped headspace through her Possession-esque body language and primordial wailing. One of the film’s very best moments watches as Selva sits down on a couch and slips her hands underneath her pantyhose onto her legs, moaning with calmed comfort as she ostensibly begins to feel safe. Yet her hurricane eye passes almost as soon as she meets it, and her fleeting moment of security disfigures into a nightmare, her hands now trapped underneath her “skin”. It’s true that we see none of Selva’s hallucinations- nor those of any of the other tripping members of the troupe- but the conscious implication of their mind-melting experience proves to be just as riveting.

Many have characterized Climax as Gaspar Noé’s most accessible film, and I certainly can’t disagree. Though I personally consider Noé to be a very accessible arthouse auteur (despite the provocative intensity of his films), Climax is indisputably his tamest and most polished work to date, more a curious sampling of his eccentric style and extremities than one of his typical self-indulgences. Such a boundary, however unintentional it may be (I highly doubt he was actually trying to craft an easier film to swallow), places a slight creative hamper on Climax. For a director whose work is so unequivocally obsessed with the notion of losing control, it’s perhaps a tad disappointing that he’s reeled in some of his more unwieldy artistic impulses in favor of efficiency and polish. And yet at the same time it’s nigh impossible to be disappointed with Climax, for the film is an absolute pleasure from start to finish- a demented pleasure to be sure, but a true thrill ride that stretches its succinct 95-minute runtime in the most masochistically enjoyable of ways.

If Gaspar Noé films are drugs, then Climax must be as he describes MDMA- a euphoric epilogue of pleasure and fear straight to the brain with none of the “before” to warn us. It’s a claustrophobic odyssey delivered intravenously, a dizzying rush of sensory overload that’s over so quickly you’ll be left light-headed but dying to experience it again. Luckily for cinephiles (and Noé stans like myself), there are no dangerous side effects to be risked from repeatedly partaking in Climax, and I for one look forward to enjoying this potently intoxicating film for many years to come.