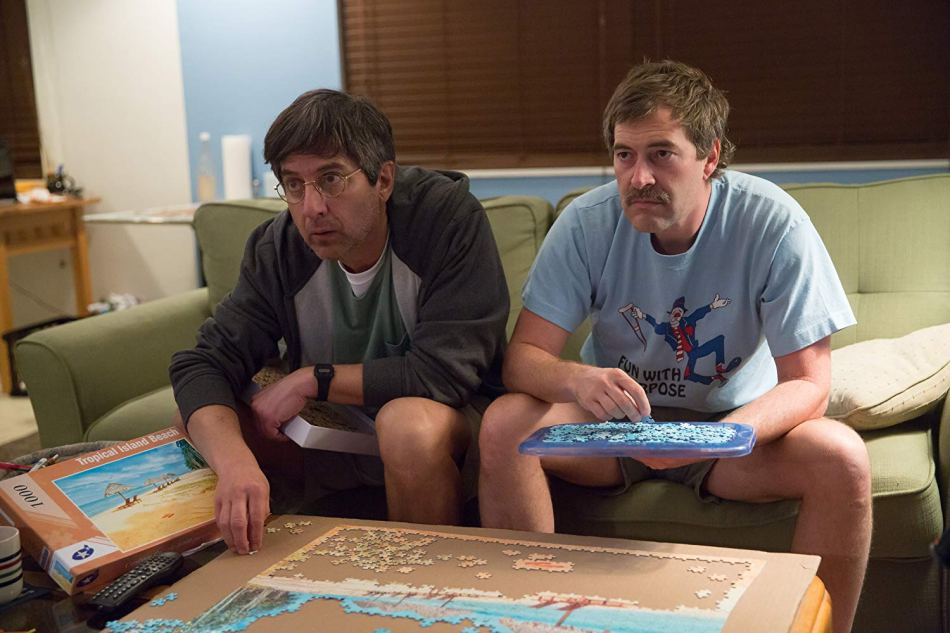 We all have some vague understanding that our time is limited. It’s a harsh, inevitable fact of life that every single one of us will eventually take our last breath and simply cease to exist as a conscious being. Death is the ultimate punctuation mark on the human experience, a gargantuan topic that one could approach in art from every conceivable angle and still miss so much. There have been countless great films made about death: Ingmar Bergman‘s Cries and Whispers explores the suffering and finality of it while Charlie Kaufman‘s Synecdoche, New York conveys the anxious feeling of death as a timebomb weighing down on everything we do.

Though comparing Alex Lehmann‘s Paddleton to either of these masterpieces is rather silly, the little indie film actually approaches the topic of death with a surprising sobriety. Paddleton, which premiered at Sundance back in January and is now available to stream on Netflix, is a brief meditation on death through the limited lens of 90-minute indie film. Occasionally funny and modestly thoughtful, the film manages to get quite a few things right while still feeling like an extended YouTube sketch.

Michael (Mark Duplass) and Andy (Ray Romano) are neighbors and best friends, the type of best friends that spend every waking moment together eating frozen pizza, watching the same cheesy kung-fu movies, and playing a made-up tennis derivative they call ‘paddleton’. No, they aren’t eight-year-olds, they’re grown men, and much of the two’s bond unfolds to us like a mumblecore version of Step Brothers with grim pathos. In the very first scene, Michael learns he has terminal stomach cancer and is going to die; he later informs Andy that he has signed up for an obscure prescription that will “end it sooner”. Paddleton watches, sometimes quite poignantly but always absurdly, how the two grapple with the certainty and discomfort associated with the death of a loved one.

The two need to drive six hours to actually get the prescription filled- it’s a fictional drug designed for one to prematurely kill themself after all- and so much of the film’s runtime transpires in the vein of a road trip movie. To their credit, Mark Duplass and Ray Romano have a surprising amount of comedic chemistry with one another. Ray’s character Andy is often a quite funny character to Mark Duplass’ straight man Michael, subconsciously controlling the former and always in a state of perpetual anxiety. A great deal of the humor plays off of how unhealthily close they are, and indeed several people rightfully mistake them for a fussy couple throughout the film. It’s not always funny however, and just as many of the gags fail (in unbearably awkward resignation) as land. I’m not certain, but I’m incredibly doubtful that the film’s cringe-worthy sense of humor would hold up on a second watch.

The one area Paddleton does manage to exceed expectations is in its underplayed conception of death. Despite the utter absurdity of its situations, the film presents a rather heartfelt but sobering examination of the questions one faces while approaching death. At one point, Andy laments to Michael that he should have taken off more work to spend time with him, that they “could have done more things” with the brief time he had left. In the context of their bizarre friendship, it’s a rather ridiculous thing to say (considering they spend every minute together), but taking a step back it’s a sentiment that likely rings true for many people when confronted with the permanent loss of someone important to them. Like a great deal of its humor, the way in which Paddleton presents death hovers somewhere between total absurdity and sober realism. It mostly manages to land its culminating death scene, a messy and fairly upsetting moment demonstrating that even the most confident person cannot adequately prepare themself for their permanent nonexistence.

Even while I was mildly moved by its most vulnerable moments, I couldn’t help but question why this was a feature film. Despite a clear three-act structure and two more than capable leads, I left Paddleton feeling as if I had just watched an overlong short film. Within the limited framework it establishes, the film mostly accomplishes what it sets out to do, but it certainly isn’t anything immensely special. I predict many will find their mileage varying drastically with how much they get out of Paddleton. Some will turn it off with embarrassed regret within minutes, and yet some might find it wholesomely endearing. I fall somewhere in between, and cautiously recommend this benign 90-minute indie dramedy.