The latest film directed by an auteur to be given a Netflix release, Triple Frontier is at once a departure from and a return to expectations for director J.C. Chandor. A director known for subtlety and unique, almost anti-takes on genres, Chandor’s latest is both a contemplative look at war while also being an action film. The two are often intertwined with one another, but can largely be defined by its more action-focused first half and its more thematically-focused second half. Rich with smart themes and ideas regarding what it means to be a soldier, the life for a soldier after war, survival, and greed, Triple Frontier is another strongly directed work from Chandor but a film that adds up to less than its parts may suggest. 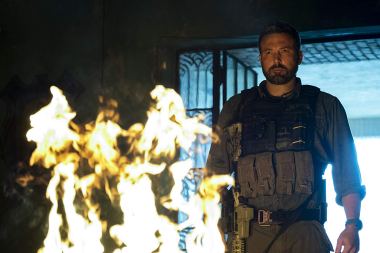 First and foremost, Triple Frontier is as thematically polished as one would expect from Chandor. It is a considered look at the life of a soldier and, as Charlie Hunnam‘s William Miller introduces in an opening speech, a film about the, “biological and physiological effects of being a warrior.” Whether it is in the clearly dire financial straits the five men- William Miller, Tom Davis (Ben Affleck), Santiago Garcia (Oscar Isaac), Ben Miller (Garrett Hedlund), and Francisco Morales (Pedro Pascal) – find themselves in that drives them to steal money from a drug lord, or their own personal reckoning with the harm they have caused (balanced by their pride in their service), Triple Frontier offers no easy answers. These are all desperate and tortured souls, trying to quell their demons in the only way they know how: shooting a gun and executing a plan. Without this, they feel helpless, and are defined by their own personal failures to re-adapt to civilian life in ways that do not involve prolonging their military careers. The job they find themselves taking is not just a financially beneficial choice, but a chance to possibly wipe out a Colombian drug lord – one who Santiago has been chasing for years – and make an impact again. Chandor counters these ideas of sacrifice and service with cynicism over their intentions, whether in the men’s initial drive to do whatever to get rich and in the willingness of locals look the other way as long as they get a share too.

Tackling these weighty and ambitious themes and blending them with the expected bloodshed these men will endure, Triple Frontier is impressive to a point. The film largely struggles when it comes to the writing. Unable to maintain the subtlety that Chandor has excelled in throughout his career, the film opts to instead outright explain how greed is killing the men, or discussing the impact killing has had on them. The fact that these ideas are so on-the-nose is an issue, but more troubling is the stiff dialogue that such directness requires. Chandor and writer Mark Boal are never able to seamlessly weave these ideas into the plot whenever it decides to be so upfront, finding the cast awkwardly stumbling around as they discuss these ideas. As a result, the characters tend to suffer. For the most part, they are merely representations of the film’s ideas with little humanity within them. It is not a shock that the characters are a little thinly written, but the extent to which they serve as thematic vessels proves disappointing.

The film also struggles when it comes to the actors. Charlie Hunnam has found certain roles that work for him over the years, and his turn as William Miller is strong when he is given a gun and some typical soldier dialogue. When tasked with confronting the emotions with him, Hunnam fails to firmly establish himself in the role. Even more acclaimed actors such as Ben Affleck and Oscar Isaac seem to be largely sleepwalking at times, almost dispassionately staring off into the distance while playing rather poorly drawn characters who lack a personality trait outside of “indecisive”. Affleck is the stronger of the two, though only giving a mixed bag of a performance. He excels early on as a lameduck real estate agent (with great character development on his part), before struggling to adjust to the more action-focused scenes to follow. Garrett Hedlund and Pedro Pascal are probably the most consistent here, but neither truly impress. It all feels incredibly flat, as though the men flip between emotional distance to sudden emotional epiphanies over what they are doing when befits the film’s thematic focus, never striking a convincing note in the process.

Where the film does excel is in the action portions, which may be a bit more trite than one may expect from Chandor, are nonetheless brilliantly executed. The camaraderie between these men and the precision with which they execute their plans are wonderfully written out and staged. The actual heist itself is paced perfectly by Chandor, an incredibly tense scene as the men stalk out Lorea’s (Reynaldo Gallegos) jungle hideout and break in. The ensuing attempt to escape and the troubles they face in getting the money over the Andes is a wonderful touch by Chandor and writer Mark Boal. Many heist films naturally deal with the process after the robbery, but largely leave it to behind-the-scenes dealings by a mysterious “fence”. Triple Frontier confronts it head on, delivering ripping action scenes as their plane struggles to carry the weight or as they thrillingly engage in car chases through the jungle to escape. When Triple Frontier wants to be, it is a fantastic example of genre filmmaking that consistently delivers gripping and thrilling entertainment. 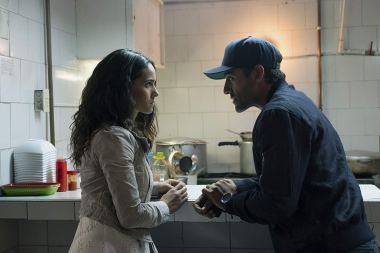 This is benefitted by wonderful cinematography from DP Roman Vasyanov, taking full inspiration from the film’s title- inspired by the point at which Brazil, Colombia, and Peru all meet. With a variety of gorgeous aerial shots, long shots of the Andes Mountains, and cramped medium shots of the rainforest engulfing the characters in its greenery, Triple Frontier lives and breathes its setting. Gorgeous aerial shots during the aforementioned chase scene not only heighten the intensity, but beautifully immerse the audience in the setting as the audience is able to follow as they weave around on a dirt road engulfed by greenery. The scale of the escape over the Andes is brought to life with Vasyanov’s work, creating quite the intimidating presence as the plane looks up at the immense mountain tops threatening their path.

Triple Frontier is ultimately J.C. Chandor’s most flawed film to date, with stilted acting, uncertain characterizations, and heavy-handed themes holding it back. However, it is still a largely good film and one that is easy to recommend for those intrigued by its premise or Chandor. The film excels with its pulse-pounding action, smart observations about life for a soldier, and gorgeous visuals that bring to life the titular region. While it may be a disappointing follow-up to the excellent A Most Violent Year, Triple Frontier is a satisfying and entertaining film.