Emma Tammi‘s The Wind is a film of contrasts. Hope for a better future is contrasted by anguish. God with demons. Light with dark. Peace and tranquility with utter terror. These contrasts are built into the film’s visual narrative to create a genuinely unnerving experience. Above all, Tammi contrasts the open landscapes of the west with a suffocating claustrophobia, gnawing at the mind of Lizzy Macklin (Caitlin Gerard). What she sees when she looks outside her window is not the beauty of the horizon, but a looming presence that will be impossible to stop. Set in the 1800s, The Wind is a psychological western about two couples, the Macklins and the Harpers. Tammi presents it in a non-linear narrative, cutting between flashbacks to Lizzy’s pregnancy, Emma Harper’s (Julia Goldani Telles) recent pregnancy, and the events that unfold after the end of Emma’s pregnancy. 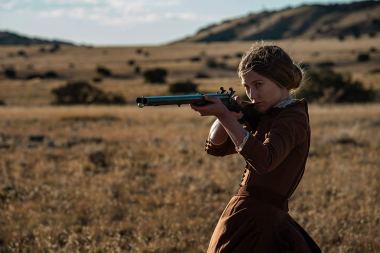 One can think of the westerns of John Ford or Anthony Mann when watching The Wind, especially considering a call-back to Ford’s The Searchers with Tammi and DP Lyn Moncrief somewhat recreating that film’s iconic final shot. As with Ford or Mann’s films, The Wind soaks up the scenery. Long shots are a staple, panning across the horizon and allowing every inch of it to come to life. Yet, Moncrief and Tammi counter those expansive shots with long shots at night where nothing but Lizzy’s lantern can be seen in the distance. The shots are overpowering, taking the scale of the landscape and engulfing in darkness. These embody how the landscape is not filled with possibility for Lizzy, but rather an endless reminder of her absolute isolation, with the shadows hiding the demons her mind has created.

This chilling atmosphere of constant dread is furthered by the score composed by Ben Lovett. Prone to suffocating swells of noise alongside eerie notes, the score perfectly sets the tone for the film’s ominous mood. The editing also adds to this as it plays on that idea of contrasts. Tammi and editor Alexandra Amick frequently lean on hard cuts – often matched by a swell of Lovett’s score – that, in one instance, suddenly moves the action from Lizzy fending off a pack of wolves in the dark of her home to her calmly feed some goats in the daylight. This style is a constant throughout the film, proving just as jarring each time but also adding to that psychological terror. The non-linear narrative, hard cuts, and the creepy score, all match Lizzy’s mental state. As things become scattered for her, so too does the film. The score often matches the buzzing within her mind, flooded with thoughts and fears that only compound as her isolation drags on. Her husband Isaac (Ashley Zukerman) may try to pull her back, but Lizzy is too far gone. Tammi drops the audience right into her mind, bending reality and time in the process to create a truly confounding yet nevertheless chilling experience.

The genius of The Wind is found in how it takes the hope for prosperity and a better future that drove people west and inverts it to show the horror of isolation. The final shot best solidifies this, slowing craning up as Lizzy is all alone outside. As the camera moves up, she increasingly appears to be swallowed up by this vast landscape. Yet, Tammi takes it a step further throughout. This is not just a character study of a woman being driven mad by her isolation, it is also a study of grief, jealousy, and women on the frontier. As much as those alleged supernatural forces may be driving Lizzy’s issues, so too are those more tangible elements. The latter, women on the frontier, proves especially interesting and offers an incredibly fresh take on the genre as Tammi peels back the way in which the roles forced upon women of the era set these events into motion. It never tries to write away anything Lizzy does, but it does urge empathy for her, showing her to be a flawed yet doomed woman. She is being torn apart from the inside, haunted by inner demons that have manifested into a prison from which  she cannot escape. She is marginalized, forced to live a life where being a mother is prized above all else and one where she is expected to stay home while Isaac is away. Through these ideas, Tammi crafts a thematically strong, ambitious, and smart film. It capably probes Lizzy and her mind, using every tool in Tammi’s arsenal to great effect.

This character study is benefited by strong acting from all involved. The performances are well-rounded, capably executing the subtle bits of emotion shown by their characters or believably selling the more intense scenes. Caitlin Gerard is especially impressive, capturing the slow-building insanity and the intensity of Lizzy as she desperately tries to find somebody to believe her. Julia Goldani Telles is similarly strong, playing well against Gerard when Emma begins to lose her mind, serving as a beguiling presence within Lizzy’s mind and visions. Tammi contrasts the increasing insanity of Emma with the initial stoicism of Lizzy, bringing them closer together in nature as the film progresses, a role that Telles plays quite well.

The Wind can be flawed at times, particularly towards the end where its horror elements reach too far. For the most part, Tammi leans on subtle, slow-building, and rewarding psycho-horror, but the climax takes a page out of Drag Me to Hell. The climax is certainly an intense scene, but feels out of place compared to its low-key dread. The Wind is at its most horrifyingly effective when it relies on these underplayed moments of dread and special effects. It may deliver many of its scenes of terror through the mind of Lizzy, but it finds itself just as effective in showing the full gravity of what transpired as a result of that psychological terror. Thus, while it may occasionally indulge itself in full-blown horror, The Wind remains a greatly successful horror film.

As the directorial debut of Emma Tammi, The Wind is a fantastic triumph. A gripping twist on classic western tropes blended with supernatural horror, The Wind is both thought-provoking and terrifying. Tammi’s assured direction never wavers, executing her vision with an efficiency well beyond her stated experience. Strong performances, cinematography, editing, and music all work to further The Wind as not just as a promising debut but as a great film.