The third directorial effort from Ralph Fiennes, The White Crow tells the story of Rudolf Nureyev’s (Oleg Ivenko) life up to 1961. From being born on a train in 1938 to his eventual defection – the first by a Soviet artist – The White Crow recounts the events that influenced that crucial moment in his life and in Soviet Union history. As with any biographical film, Fiennes is presented with the challenge of compressing 23 years of Nureyev’s life into a digestible cinematic experience. Focused on select periods of his life, The White Crow aims to show both his path to defection and to becoming a world-renowned dancer. The end result is a somewhat cluttered and often overly complex film, but also one with great beauty. 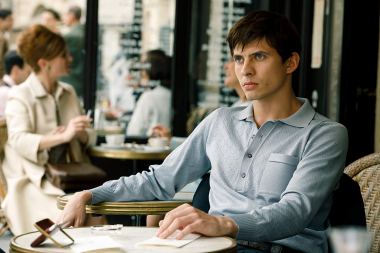 The film’s structure is perhaps its greatest flaw. Fiennes focuses on Nureyev’s youth, his training, his career and trip to Paris, and his defection. These serve as the foundation of the film with The White Crow cutting between each section. This chopped-up presentation is effective in creating juxtapositions- such as between the cold, gray youth he led and the vibrancy of Paris- and in demonstrating his growth from a young, promising dancer to one of the world’s finest. However, it can often prove quite disorienting. The only time period that is distinct in look is the flashbacks, thanks to the washed out look provided by DP Mike Eley.  Otherwise, each transition requires a brief adjustment period for the audience to regain their bearing on where the film is and what is happening in the section. As a result, The White Crow feels as though it constantly undermines itself. It is too disjointed, jumping around and often undercutting the building tension or beauty of a moment. The film frequently cuts a conversation or a dance a bit short, hopping around its time periods with little purpose.

The choppiness found in the film’s structure can also be found in the script. The dialogue is often stiff, cold, and inhuman, awkwardly fumbling around the encounters various people have with Rudolf. It struggles to maintain genuine conversation, often unnaturally bogging down dialogue with themes, personality traits, or beliefs. As a result, The White Crow is often on-the-nose and clunky. This is most egregious in conversations with Clara (Adèle Exarchopoulos), where the two’s encounters amount to nothing more than prolonged exposition. Repetition is a constant, often returning to how Rudolf was “born on a train” or different from the other dancers, beating these points over-and-over again. Together, the flawed structure and the flat script leave The White Crow with no rhythm.

Where The White Crow is more successful is in painting a picture of Nureyev, both as an artist and as a dancer. The words from Pushkin early in the film, detailing how his defection was “about dance”, come to life throughout the film. One can see his passion, fire, and skill leap out as he grows from an aspiring dancer to a revered one. The film’s narrative structure can often be beneficial in capturing this growth, especially at the end as Fiennes cuts between his first day as a dancer in his youth to his first practice as a defector. Focusing on him as he does the same movements, one sees his growth in full detail. This is, as the film frequently reminds the audience, a story of a boy born in a train who went on to achieve great things. The full breadth of that journey is in constant focus. Yet, Fiennes refuses to gloss over the negatives of Nureyev’s personality. His public outbursts are displayed in full detail, showing him lash out at Clara for no reason. Though The White Crow may be in awe of Nureyev’s artistry – the dance scenes are suitably gorgeous – it refuses to sugarcoat him, demonstrating both his moral and personal flaws.

With regard to Nureyev’s sexuality, The White Crow is disappointing in its glossing over of his relationships with men. The one heterosexual relationship he has, a scandalous affair with teacher Alexander Pushkin’s (Fiennes) wife Xenia Jurgenson (Chulpan Khamatova), is the main romantic focus of the film. It is given the longest and most frequent attention, whereas his lone gay encounter with Teja Kremke (Louis Hofmann) is shown only in its aftermath. In addition, rather than focusing on one another, Rudolf and Teja’s scenes together find them only discussing Rudolf’s relationship with Xenia. Where his desires or preferences lie is never broached, instead emphasizing the controversial affair. While Nureyev’s lifelong relationships would only occur after his defection, The White Crow’s inability to handle this side of him is disappointing.

One of the strongest scenes in the film is the ultimate defection scene. It is claustrophobically presented by Fiennes, using frequent close-ups and blockings that find Rudolf surrounded by Russian agents. As the wheels are put into motion, with every step of the defection process shown, Fiennes builds the suspense and sets the stage for what is about to occur. It is the moment that the film is building up to, subtly laying the seeds that would motivate Rudolf to eventually defect. It all pays off in this moment, as he dramatically races towards French officers and finally escapes a country that he has grown to   find increasingly restrictive. It is a thrilling moment, but also one with a powerful emotional release, serving as a fitting climax for the film.

A choppy narrative structure, a disappointing representation of Rudolf Nureyev’s sexual life, and a stiffly disconnected script hold The White Crow back considerably. Despite a flawed telling of Nureyev’s rise in ballet and eventual defection from the Soviet Union, The White Crow is not entirely irredeemable. Its gripping story often rises to the surface and is often thrillingly represented. The film captures the inspirational nature of this journey, while covering a great many details of Nureyev’s life, to paint a picture of who he was. Nonetheless, The White Crow is a middling effort from director Ralph Fiennes and is too much of a mixed bag to fully recommend.