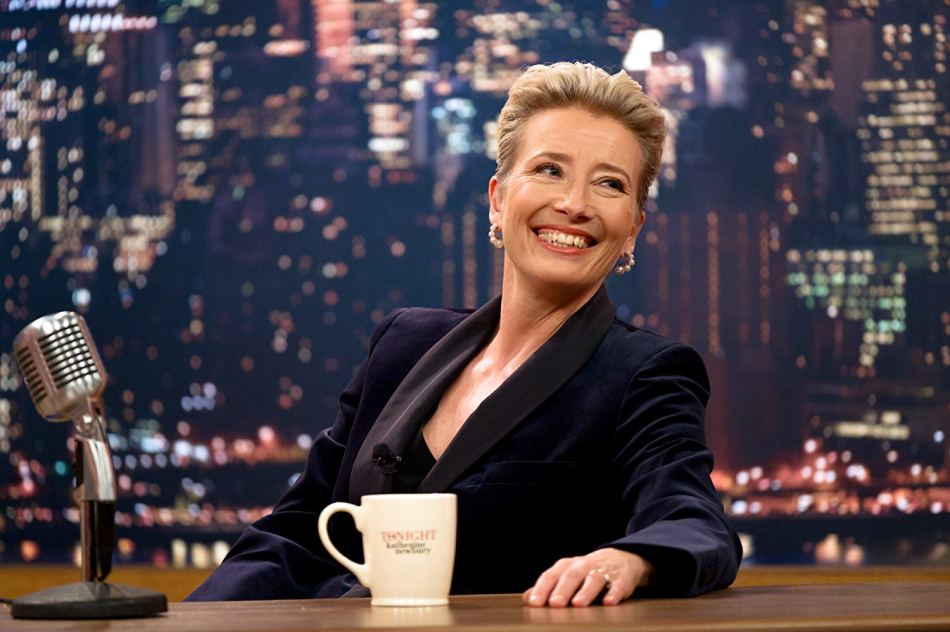 After years of writing for television shows such as The Office or her own creation The Mindy Project, Mindy Kaling steps into the film writing world with Late Night. Starring Emma Thompson and herself, Late Night follows late night talk show host Katherine Newbury’s (Thompson) attempts to revitalize her failing show. Having become complacent over the years, Newbury is set to be cancelled. Desperate to appease viewers and overcome her difficulty working with women, she makes a “diversity hire” to fix this. Molly Patel (Kaling) is that hire, coming from a non-comedy background and, hopefully, bringing a fresh perspective to the all-male, all-white writing room. Unfortunately, Late Night itself is hardly fresh. 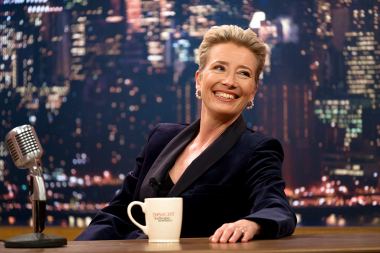 It is hard to bash Late Night too much, as there is a sentimentality that is appealing. It is eager to please, and wants the audience to have a good time with it while considering important ideas like diversity, sexism, and the work environment. The skill Kaling has demonstrated in her television career is on full display, writing good-natured jokes that strike a strong balance between sharp wit and physical humor. In addition to its comedy, the film’s  drama touches on strong interpersonal notes like infidelity, friendship, and working relationships. It handles all of these with an upbeat demeanor that perfectly represents the good soul at the center of this picture. While every joke may not land and some of the drama is a bit flat, Late Night will certainly provide enough laughs to entertain.

Unfortunately, Late Night is not as successful in tackling its larger ideas. Katherine Newbury is a cruel, inconsiderate, and self-absorbed person. She has never met most of her writers and, when she does, assigns them a number instead of bothering to learn their names. She has a problem working with women, hating her boss Caroline Morton (Amy Ryan) without even meeting her and running off any woman writers she briefly hires. Yet, a little “splash of color” via Molly changes all of that, and Katherine suddenly becomes nice. Even her sexist and nepotism-loving co-writers see a new path. In trying to be so upbeat and happy, Late Night handles the growth and change of these people with a wide-eyed naivety. It glosses over the systemic and deeply ingrained issues within them and the entertainment industry, offering a magical character whose mere presence in the room changes everyone’s outlook on life and work. The cruelty and hostile work environment Katherine pervades is a thing of the past, all because Molly is just so nice and hard-working. While the lack of cynicism can be refreshing, it simply feels too glossy and simple in this context. 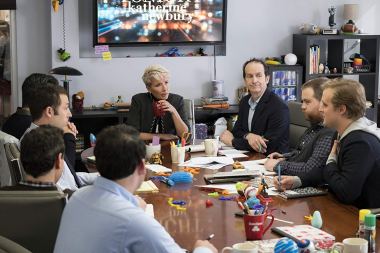 This simplicity also robs the characters of true growth, rendering them more as caricatures than real people. The film’s naivety even spreads to the inner-working of television. Katherine Newbury has spent more than a decade alienating anybody who dares to care about her show. Now, the network wants to replace her with the younger, vulgar, popular, and sexist caricature that is comedian Daniel Tennant (Ike Barinholtz). To stave this off, Katherine only has to try hard. Once she does, ratings and upper-level management support improve. This, like Katherine’s growth, is too sugarcoated. It feels like the whimsical daydreaming of an aspiring writer, one completely out-of-step with the reality of the corporate politics it purports to show. It is a nice thought that hard work and honesty are rewarded, but when ratings are a factor- and they are shown to be- it is hard to see Late Night’s plot as anything but fantasy.

The thin characterizations and plotting are problems that are exacerbated by the editing, which makes Late Night feel abbreviated. Quick transitions between scenes find conversations – and, sometimes, tones – clashing with one another. Even cutting around the writers’ room within a single scene feels frantic. The rushed pacing created by the editing makes Late Night even more unsatisfying. No moment lasts too long, leaving the film feeling scattered and dulling the impact of even its finest scenes. In trying to do so much with its limited runtime – Late Night runs 102-minutes – the film can feel cramped, perhaps causing some of these issues. Unfortunately, it would have been better served trying to do less and hitting its workplace critiques more solidly. As it stands, Late Night tries to cram in so much plot and so many jokes that it comes at the expense of thematic depth. In an attempt to make up for its lack of breathing room, Late Night goes heavy-handed with on-the-nose comments, while cutting awkwardly to scenes that exist only to preach a point (such as rent cost in the city). Trying to fit all of this into a neat package is an unenviable task, but Late Night’s rushed feeling, flawed editing, and bloat do it no favors. 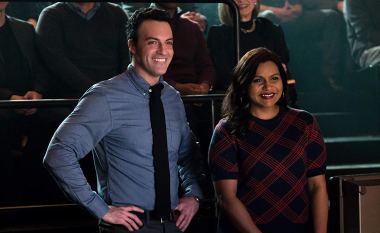 Late Night is, however, benefited by strong performances. Emma Thompson is fantastic as Katherine Newbury, particularly as the character’s hard exterior is chiseled away. Forced to reckon with what she has become and aiming to make amends, Katherine’s vulnerability is wonderfully shown by Thompson. The nerves she displays on stage and the increasing humility are believably presented, while Thompson’s great comedic skills are on full display with strong delivery and timing. John Lithgow is a terrific presence here as well, appearing as Katharine’s husband Walter Newbury. As a man suffering from Parkinson’s, Walter is not given many funny lines, but Lithgow’s rapport with Thompson and scene-stealing moments of drama are a great addition to the film. Reid Scott also stands out, displaying the same wisecracking nature as he did in Veep – a tool that Kaling takes full advantage of with Scott’s character, Tom Campbell, even given one of the funniest lines in the film.

As a whole, Late Night is disappointing. It is a funny and upbeat film that should have no trouble pleasing audiences. However, in its presentation of serious workplace themes, Late Night falls short. It shies away from the more difficult questions and systemic issues in favor of a sugarcoated, woefully naive happy ending. Any comment on show business feels inert, opting instead for a fantasy version that robs its characters and story of a satisfying arc. Late Night is the very definition of an average film, one that has compelling ideas in its peripheral that it overlooks in favor of general audience entertainment. There is nothing wrong with this, but considering what Late Night offers up and the situations its characters find themselves in, it is hard to not feel underwhelmed.