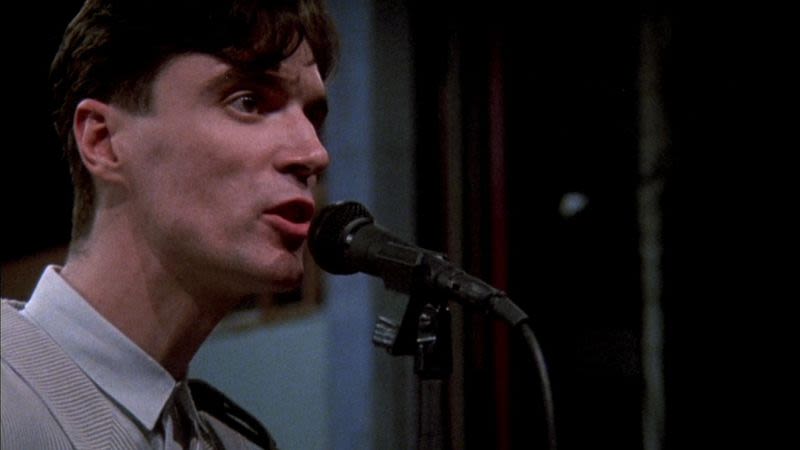 Stop Making Sense opens with David Byrne walking onstage and placing a boombox down. Staring restlessly out into the audience, he begins to sing ‘Psycho Killer’, violently stamping his foot against the floor as if possessed by some irrational fear that the beat will run away from him. The boombox’s machine gun-rhythm blends and grooves with Byrne’s frenzied acoustic guitar and the song’s paranoid lyrics, conveying a feeling of panic only barely held at bay. As the song concludes, Tina Weymouth– the band’s bass guitarist- joins Byrne to perform ‘Heaven’, a cynical ballad about disillusionment with eternal paradise. Slowly but surely, each member of Talking Heads makes their way onto the stage with each consecutive song. Finally, the band’s energy becomes impossible to contain, exploding past its boiling point in ‘Burning Down the House’- the first song to feature the full Talking Heads. The desperate anxiety Byrne first carried onto the stage in ‘Psycho Killer’ is no more, legitimized by the band’s collective presence and obliterated into total ecstasy.

Stop Making Sense represents the highest gold standard for rock concert films. Shot over four nights and realized by the masterful Jonathan Demme (not to mention Blade Runner cinematographer Jordan Cronenweth), Stop Making Sense is an undiluted spectacle of pure energy. Every second of its 88-minute runtime is accounted for and immaculately realized, filmed and edited with a steady acceleration towards musical nirvana. It’s difficult to name a rock concert more aggressively polished and technically perfect, and watching each element of the band’s performance come together is exhilarating. Like many of the most legendary concerts, Stop Making Sense offers a dazzling setlist of the band’s best work, from the paranoid fear of ‘Life During Wartime’ to the middle-class disorientation of ‘Once in a Lifetime’ to the cathartic finale of ‘Take Me to the River’. Each and every song offers a new and exciting spin on its original, and several (read: most) featured during the concert are even stronger than their studio versions.

For all its droves of musical perfection, perhaps the most memorable aspect of Stop Making Sense is actually its remarkable sense of theatricality. By turning the construction of the stage into the concert’s extended introduction, the film lends itself a tremendous feeling of anticipation. With each new piece of equipment and band member entering the stage, the excitement builds with rapid inertia, even after the band is complete about 30 minutes in. Much of this is owed to the charisma of David Byrne’s anxious concert persona, who throughout the performance fervently stamps his foot with the beat, jogs laps around the stage, and dons an embarrassingly oversized grey suit. Though none of the band members ever reach as flamboyant of choreography, their beaming presence on stage with him nevertheless raises the amplitude of the film’s mind-melting kinetic energy.

The cinematic qualities of a rock concert documentary are often neglected or completely lost in the process of shooting it, but Stop Making Sense brings such a formidable amount of talent to its technical craft that it’s impossible to deny its status as a real film. Jordan Cronenweth’s cinematography and Lisa Day‘s sharp editing are both breathtaking without drawing attention to themselves, devoted more to displaying their subjects’ talent than showing off their own technical skill. They work in harmony to capture the concert at its most glorious, knowing when to shoot up close and personal with the band and when to take a backseat in the audience. It’s a testament to all their proficiencies as filmmakers- Demme, Cronenweth, Day, and even Byrne- that Stop Making Sense comes together so convincingly as a cohesive concert despite its segmented production.

It’s been less than a year since I first saw Stop Making Sense. I had tried and failed to get into Talking Heads before, but there was something missing, holding me back from “getting” their music. Within the first ten minutes of watching the film, I knew they were destined to become one of my favorite bands, and I still listen to them often to this day. Their music works on its own, of course, but something about watching the band perform, joyously alive in front of a camera, proved essential in my ability to understand and appreciate them. There’s something addictively cathartic about Stop Making Sense in the way its anxiety leads naturally and imperceptibly into exultation. It’s one of the most comfortably ecstatic films I’ve ever seen, and it earns my highest recommendation, especially to those who find the appeal of Talking Heads an elusive endeavor.

This piece is part of a series of writings published during July 2019 about documentaries. Documentaries can… convey a feeling as we’ve seen in Jonathan Demme’s Stop Making Sense.

0 comments on “Stop Making Sense: The Ecstasy of Anxiety”