This month, we take a look at a few of our favorite films from David Fincher. We hope that this retrospective can serve to satisfy fans of the director in this lengthy period of time between his most recent film, Gone Girl, and his next film.

Ernest Hemingway once wrote, “The world is a fine place and worth fighting for.” I agree with the second part.

The closing line of Se7en is one of the most memorable film quotes, and I could not agree with it more. David Fincher has a habit of displaying worlds in his films that are both bleak and beautiful. At the centre of Se7en are two police detectives looking for a serial killer whose victims are associated with one of the seven deadly sins. Many neo-noir crime dramas feature police investigations, but Fincher perfectly captures the genre perfectly in Se7en. His films are not only dark in appearance, but also by nature. Fincher uses wide-angle shots frequently in his films, and this helps to display the world around the characters. Doing this allows the filthy world in Se7en to be continuously seen, and in turn, elevate the story. The production design in Se7en is sublime. Every scene is thoroughly detailed such that each one looks like a real place rather than a film set. Despite the creation of a grimy world, there is also a distinctly calculated, cinematic look to Se7en. Fincher is a consciously technical director. In all of his films, particularly in Se7en, scene composition is meticulously created, to draw the audience into the film. However, Fincher does not dimish his actor’s performances. His scrupulous attention to detail helps immerse them within their surroundings. Fincher has since gone to make more fantastic neo-noir films, but his sophomore feature is his most memorable.

David Fincher initially was reluctant to direct Fight Club (his fourth film) because of the experience making his first feature Alien 3 with 20th Century Fox (Fight Club would come to be produced by Fox 2000 Pictures). Despite the mixed reception from his directorial debut, Fincher’s films since have gained critical acclaim. Unfortunately, apart from Se7en, his early films were less successful at the box office. However, Fight Club has become a cult classic, and it expertly displays Fincher’s style. Every technical element of the film is brilliant. The sharp editing and quick pace is just one aspect that subliminally helps convey the plot. Based on Chuck Palahniuk‘s novel of the same name, Fight Club follows a working-class male (Edward Norton) who befriends a devil-may-care soap salesman (Brad Pitt), together forming an underground rebellion against society. Fight Club is a social commentary on capitalism and consumerism amongst other qualities of modern life. The line: “The things you own end up owning you” is a comment on how we as consumers can get exploited by capitalism, even if experiencing great material wealth. The use of special effects to show how the narrator’s apartment full of needless inanimate objects cleverly and visually enhances this point. Each item appears as if were pictured and labelled in a catalogue as the camera pans across the room. Fight Club once again shows how Fincher skillfully combines all elements of production to heighten the impact of the actor’s performances and film’s story. It defines how his maximalist approach works.

Zodiac is often hailed as David Fincher’s best work to date, and for good reason. The serial killer-police procedural exhibits a notable advancement to Fincher’s now-characteristically frigid style of filmmaking, employing cold digital camerawork, anxiously composed framing, and subtle but pervasive use of visual effects. Like much of the director’s masterful career output, Zodiac is a film drenched in obsession. Based extensively upon police reports and the book of the same name, the film’s script (written by James Vanderbilt) is as meticulous in detail as its neurotic auteur.

The sprawling crime saga begins on July 4, 1969, with the grisly gun murders of a couple making out in their car on a deserted road in Vallejo, California. Their attacker, the infamous Zodiac Killer, mails a letter to the San Francisco Chronicle a month later, accrediting himself to the murders and taunting to kill again if the newspaper refuses to run an encrypted message. Robert Graysmith (Jake Gyllenhaal), a clean cut cartoonist new to the Chronicle, takes a curious interest in the Zodiac, as does Paul Avery (Robert Downey Jr.), the paper’s homicide reporter, and Dave Toschi (Mark Ruffalo), the disgruntled detective overseeing the case. Over the course of the film’s expansive 162-minute runtime, we follow the decades-long Zodiac investigation through the eyes of the victims, the police, and later Graysmith’s own amateur police work.

It’s remarkably easy to lose oneself in Zodiac’s fruitless search for truth, even on multiple rewatches. Much of the film’s magic is in its mundanity, through its utter refusal to sensationalize the ghastly crimes at its center. Zodiac roots itself firmly in the factual, presenting the case as it unfolded. The film’s patient pacing is never boring however; on the contrary, its leisurely storytelling pulls you gradually to the very edge of your seat. By the time the film reaches its heart-pounding climax, you feel as uncertain about the Zodiac as Robert Graysmith himself. Fincher’s restrained visual flair adds the cinematic cherry on top, placing emphasis on key moments of suspicion with striking close-ups. David Shire’s equally subtle score adds further texture and atmosphere, a restless arrangement of piano and strings somewhere between isolating dread of Alien and the isolating paranoia of The Conversation (which Shire also scored). While this critic may hold a slight preference to 2010’s The Social Network, Zodiac holds up 12 years later as an impeccable mood piece, and the gold standard for true crime cinema.

The Curious Case of Benjamin Button (2008)

David Fincher started his career and made a name for himself making meticulous thrillers with dark subjects, but with 2008’s The Curious Case of Benjamin Button, the director ventured into new territories and made a fantastical romantic drama. Based on a short story from F. Scott Fitzgerald, the film follows the life of Benjamin Button, a man who was born with the body and illnesses of an elderly man and aged in reverse, as he lives through much of the 20th century. Though a departure from the director’s earlier work and not the sort of film he has made since, The Curious Case of Benjamin Button stylistically remains very in line with all of David Fincher’s work with its deliberate lack of handheld camera usage, few closeups, meticulous framing of shots, a dark color palette, Brad Pitt, star of Fincher’s Se7en and Fight Club, portraying the titular character, and, perhaps most importantly, the absurd and bleak situation that the narrative presents being what allows for the humanity to shine through. David Fincher’s ability to effectively tackle such varying types of films while remaining true to his own directorial style and principles is a true testament to his strength as one of the best modern directors. 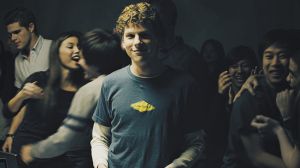 Few films have held such a longstanding personal importance in my life than The Social Network. To me, it’s David Fincher’s magnum opus, in no small part due to the breathtaking marriage of Aaron Sorkin’s rapid-fire screenwriting and Fincher’s cold visual prowess. When I first saw the film in 2011 or 2012, however, I liked it for markedly different reasons. Around 12 and 13, I was just starting to become interested in computer programming, and seeing the way Silicon Valley startups were portrayed in The Social Network – fast-paced, cutthroat, and just plain exciting – I was eager to learn as much as I could about the booming world of computing. At the time, I actually remember identifying an awful lot with Jesse Eisenberg’s portrayal of Mark Zuckerberg – although now of course I find him (and the real Zuckerberg) insufferable. As embarrassing as the truth might be, I would be lying if I don’t attribute at least some of my current status as a graduating senior in computer science to seeing the movie as an early teenager.

I’ve watched The Social Network countless times over the years, probably more than anything else released in the last decade. Each and every time offers something new and rewarding, and I’m consistently amazed by its visual and narrative perfection as I learn  more about cinema. It may not be as bold or as historically accurate an effort as Zodiac – The Social Network is based largely on Ben Mezrich’s book ‘The Accidental Billionaires’, a more sensationalist retelling of history than Fincher’s authentic police procedural – but the film nevertheless remains an exceedingly well-crafted tale of fame, fortune, and ruined friendship. If it doesn’t stick to the facts, it certainly sticks to its cold digital heart, and it’s absolutely among the most ominous reflections of the early 21st century zeitgeist.

Adapted from Gillian Flynn’s novel of the same name, David Fincher’s Gone Girl is a masterclass in how to make a thriller. His sharp, detail-oriented direction is plainly obvious throughout this film, as he fuels every scene with wondrous tension. Fincher’s direction in this movie is more subtle and achingly anxious than his previous works, as he resists from any kind of twist to surprise the audience. The greatest aspect of Gone Girl is how Fincher teases the audience with what the two lead characters might do next but finishes off the film in a more reflexive way, holding a mirror up to couples who might see a bit of themselves in the two leads.

Assisted by an incredible performance from Rosamund Pike and a great but suiting performance from Ben Affleck, Gone Girl is an uncomfortably relatable marriage drama that shows how years of hate and distrust can explode. The rightfully feminist message rooted throughout this film is one that some may be in denial of being able to see, but one that Fincher makes sure his audience is aware of. A two-sided cat-and-mouse tale surrounding the dangers of marriage may not seem like a story Fincher is keen on tackling, but here he finds a way to imbue his witty and often comically dark style in a fantastic way.

0 comments on “The Films of David Fincher”