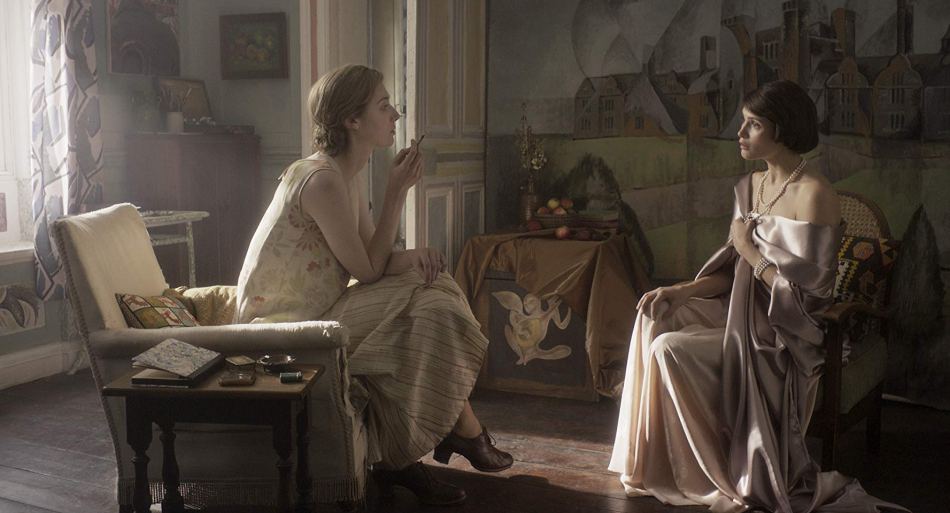 Sometimes a writer’s reputation and experiences are just as fascinating as their own artistic creations. An example of this is the life of early 20th century author Virginia Woolf, known for such works as Mrs. Dalloway, To the Lighthouse, and A Room of One’s Own. Aspects of Woolf’s personal narrative – such as her affair with colleague Vita Sackville-West – not only give insights to some of her writings, but also give a sense of who she was as a woman. The written correspondence between Woolf and Sackville-West are that of literary legend, making the subject an obvious choice to be the focus of cinematic adaptation. However, director Chanya Button’s Vita & Virginia, based on Eileen Atkins’ play that takes inspiration from the letters, fails to capture the romance in a convincing way. 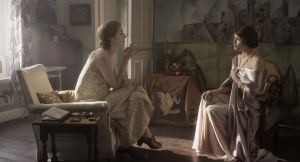 Vita & Virginia begins with establishing the charismatic London socialite, Vita (Gemma Arterton), who has a penchant for illustrious living and travelling the world with various female companions. Her next conquest lies in Virginia (Elizabeth Debicki), whose literary career is quickly burgeoning on the verge of greatness as she revises her most recent novel. Both women are married – Vita to Harold Nicolson (Rupert Perny-Jones) and Virginia to Leonard (Peter Ferdinando) – though the relationships seem to be more for show than anything. Vita works her way into Virginia’s artistic crowd, slowly developing a working relationship with her that blossoms (quite literally thanks to some questionable CGI) into a friendship and then into an affair. But this is 1920s London, and such a taboo subject between two fairly well-known aristocratic members, is a danger in of itself.

On paper – and in real life – this is a fascinating story. Telling a somewhat brushed over part of a famous writer’s life should be a complete hit for bibliophiles as well as for fans of biopics and costume dramas. But the film doesn’t stray quite further from the latter, offering the audience the depth that a made-for-TV adaption would. Despite claiming it focuses on the love affair between Vita and Virginia (it’s in the title, isn’t it?), Button instead prefers to focus on the journey there; the tension of whether or not they will get together far exceeds their actual romance. The audience is told to care for the two protagonists’ love story, but they are never given a reason as to why they should.

The script is by far Vita & Virginia’s biggest hindrance, unfortunately. Aside from the majority of the screentime being spent establishing the two writers’ romance and failing to go anywhere with it, the dialogue is frustrating. It seems that every character is given a needless monologue in almost every scene in which they appear. As stated before, the problem with showing and not telling is ever present.

That being said, there is a main occurrence of this throughout the film that is striking to the viewer. The infamous letters exchanged between the real women are presented as fourth wall-breaking monologues as its perspective writers narrate into the camera. This technique might be a bit off-putting to some, but it was such a fresh choice that – for a while – it finally leads the viewer to become invested in the story.

While that creative liberty was interesting, one that felt a bit more forced was the aforementioned CGI that represented Woolf’s increasing mental instability. Through visions of growing ivy, flocks of ravens, rising water, etc., we are reminded of the woman’s downward spiral in means that are about as subtle as Isobel Waller-Bridge’s score. What is disappointing is that the score in another film would be memorable, if not great, but in Vita & Virginia, the synth-laden soundscapes feel out of place.

The film’s strong points lie in what we see: the actors and the cinematography. As for the latter, Carlos De Carvalho shoots a beautiful film. It at times makes the audience wish they were a part of aristocratic London in the period with the way it is recreated and captured so lovingly. As for the former, Arterton and Debicki give powerhouse performances. Arterton plays Vita with brimming confidence, but not without moments of despair and longing; a truly sad character behind the confident facade. Debicki shines as Virginia, becoming totally engrossed as the writer with the subtlety and nuance that only great actors can achieve. Penry-Jones and Ferdinando give great turns as the respective husbands, but a true highlight is Isabella Rossellini as Vita’s mother, who gravely opposes her daughter’s outlandish pursuits.

Vita & Virginia had the potential to be a great biopic as well as a worthy addition to LGBTQ+ cinema, but it unfortunately falls flat from the weight of its own story and the subjects’ reputations. The general audience will most likely be disappointed by the film, but devoted literary fans may still want to give Vita & Virginia a view.