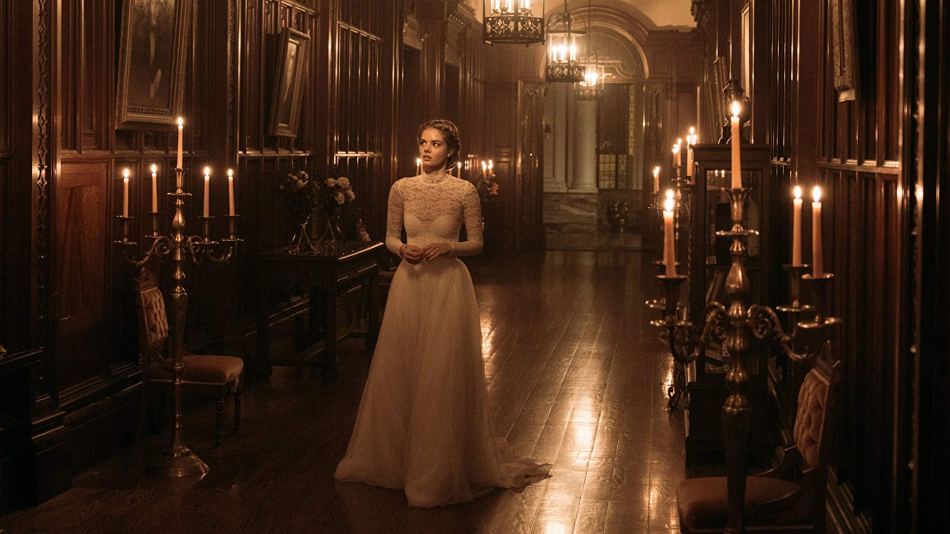 Marriage is one of life’s big moments. It is fraught with nervous excitement, an eagerness to begin a new chapter. Significant questions about the future are afoot, as well as a fear of being accepted into a new family. For Grace (Samara Weaving), this fear is even more crucial. As a woman who grew up in the foster care system, she has her heart set on finding a permanent home with the Le Domas family. Her fiance Alex (Mark O’Brien) may warn her about the oddities of his family, but for someone looking for such a tight knit group, the Le Domas clan seems a perfect fit. Their wealth is just the cherry on top, an extra benefit to marrying the man of her dreams. Unfortunately, Alex did not quite divulge every detail about his family.

Complete with an eerie backstory and lore, Ready or Not sets up its scenario in the opening scene. Directors Matt Bettinelli-Olpin and Tyler Gillett start the film thirty years in the past, showing the events of a woman’s wedding night. Family members hunt down her groom during the course of a game of hide and seek, shooting him with arrows and whisking him into a mysterious room for a “ritual”. In the present, a similar game is set to take place on Grace and Alex’s wedding night. Unfortunately for Grace, she chooses a card – which she must choose from a mysterious box – that selects the game of hide and seek for her as well. Now, she is in a fight for her life and for her marriage (assuming she still wants it).

As a horror comedy, Ready or Not is terrific fun. With this setup in mind, Bettinelli-Olpin and Gillett mine it for every bit of suspense and absurdity they can, while never overstaying their welcome. This is a tight, thrilling, and funny romp through the hyperbolic eccentricities and exploitation that outsiders face at the hands of the rich. The harrowing opener sets the mood, while the home of the Le Domas family is crucial in establishing Ready or Not. With creepy paintings on the wall, dim lighting on every hallway, and secret passageways abound, this home is the perfect stage for a twisted game of hide and seek to unfold.

While Ready or Not indulges in suspenseful chases, close calls, and its fair share of over-the-top bloodshed, it maintains an oddly light and comical touch. As it follows a group of rich, spoiled, and indoctrinated psychos, the potential for insanity is quite high and the film consistently delivers laughs. Comedic timing either from the cast or the editing is crucial, playing out dark moments just long enough to make them funny. The film’s climax is perhaps the funniest – and most twisted – moment in the film, toying with these villains just as they toyed with Grace and others. Forcing them to confront the reality of their situation then paying it off in a gloriously gory and unexpected fashion, Ready or Not gleefully indulges in every wacky  inclination its creatives decide to pursue.

Walking this thin line between horror and comedy is perhaps Ready or Not’s most impressive feat, but it is also a remarkably smart film. Weaving in themes about wealth, sacrifice, religion, and family, Ready or Not examines all that defines a person. Grace feels out of place in the Le Domas family, a discomfort that has been a constant in her life. Yet, her lack of a permanent family has also crafted her into the individual she is. Grace’s ability to adapt to new situations will suit her in the film; fighting to survive in unfamiliar territory is nothing new for her. For Alex, the opposite is true. His family’s wicked rituals – human and animal sacrifices, namely – have become normalized, poisoning his worldview into seeing these as necessary to preserve both his family’s wealth and lives.

Alex and Grace’s different backgrounds – whether financial or familial – present certain challenges, but so too do Alex’s dormant yet passionate belief in this “deal” his family  established generations ago. The film intertwines Alex’s sense of identity with his family. Thus, when his mother Becky (Andie MacDowell) pits Grace as a threat to their existence, it throws their new marriage into disarray. It also ensures that Ready or Not is more than just a fun romp. The film is a hyperbolic reflection of the challenges that go into life and marriage, whether due to a wealth gap or the coming together of two vastly different family situations. These thematic threads add a layer of emotional tension to the mix, following as Grace’s life becomes endangered in a struggle to keep her fiance from his own family.

Perhaps the most lasting image from Ready or Not comes as the camera scans Grace. This is her iconic moment, a last glance at her wedding dress before it becomes drenched in blood. At the center is Samara Weaving. She has considerable charisma, something that shines through every moment of the film. Her talent is also consistently demonstrated throughout the film by her comedic timing and display of the raw emotion that Grace is forced to confront. Yet, it is this moment in the mirror that stands out. The look in her eye as she realizes what is to come next and the shock at what she has become are evident. It is a moment where she has awoken from the dream wedding into the nightmare of the Le Domas family’s true nature. Now, armed with a shotgun and a torn dress, she must kill or be killed. Weaving wears every ounce of this weight on her shoulders, taking it with a confidence and resolve that defines her character of Grace.

Ready or Not is terrific entertainment. One may be disappointed if they go in expecting a true horror film, but what the film offers in suspense and comedy more than delivers. A fantastic piece of genre filmmaking with a star-making turn from Samara Weaving, Ready or Not utilizes its smartly realized themes, phenomenal setting, and sharp direction to create an incredibly rewarding experience.