Mario Bava is one of the most revered legends of Italian horror filmmaking. While his status as a forefather of the giallo – particularly with Blood and Black Lace – is perhaps his modern calling card, his mastery of color and lighting are another particular highlight of his work Yet, his career as a director began with this black-and-white film, Black Sunday. Released under various titles such as The Mask of Satan and Revenge of the Vampire, the film tells the story of a young woman, Asa Vajda (Barbara Steele) who is put to death. Accused of witchcraft, she has the mask of Satan nailed to her face as she is burned at the stake, only for her to put a curse on the entire Vajda family, swearing to come back. Now, two centuries later, two doctors passing by her tomb seem to have awoken something sinister. For the entire region and for young Katia Vajda (Barbara Steele) – who is, obviously, the spitting image of Asa – peril abounds in this black-and-white gothic horror film. 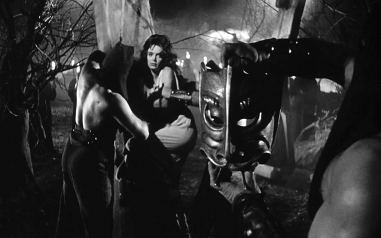 Standing tall in Bava’s phenomenal filmography, Black Sunday is perhaps still my favorite of his works. While his giallo work is always guaranteed entertainment, it is his work in gothic horror that catches my eye more strongly. The opening inquisition scene is one of his absolute finest creations, setting the tone perfectly with fog rolling about on the graveyard ground, smoke from the fire being put out by a demonic rain, and point-of-view shots showing the approaching nails of the mask of Satan towards Asa. From there, the heavy shadows within her tomb and the massive Vajda castle further establish a mood of supernatural unease. It is a chilling film, one where Bava creates marvelous shots with the suffocating shadows, eerie dark corners, and close-ups that highlight the powerful eyes of the witch Asa.

As always in Bava’s work, the biggest star is perhaps the production design. The attention to detail in crafting the gothic style is impeccable. The dingy hallways, extravagant backdrops, and wonderful paintings on the wall all work in perfect harmony. Add in the religious icons and numerous hidden passageways, and this is a prime location for a vampire story, something that Black Sunday revels in throughout. Beyond the castle itself, the touches in the graveyard are just as impressive, as fog billows on the ground and storms cause chaos outside with lightning strikes. Together, they all help to build the atmosphere of Black Sunday, a film that keeps one on the edge of their seat with dark corners lurking about.With such a plethora of passageways, Black Sunday seems to suggest, anything can happen. 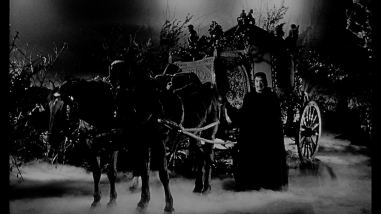 Part of the charm of Black Sunday is, oddly enough, the bad acting. It is a tense film and one rich with a gloomy atmosphere, but it is hard to deny that as great as these horror elements are, Bava was not able to match them with great performances. One can afford some leeway due to the dubbing (which never does any favors to a performance), but even then, it is unintentionally comical at times. Yet, this negative is somehow turned into a positive for Black Sunday. Not only is it a charming touch, but the unintentional hilarity somehow never detracts from the terror that the film imposes. As somebody goofily falls through a trapdoor, one would expect laughter but, instead, the terror and dread of what will be enclosing upon them far outweighs any possible comedy. It is a credit to his control of the atmosphere that even with such dumb characters and silly moments, Black Sunday’s fear factor never wavers.

From the opening scenes as a witch is burned at the stake, Black Sunday has its audience in the palm of its hand. The ritualistic horror of that opening gives way to the mythical lore of the vampire as it is unleashed upon a small village. From the gorgeous gothic design to the ominous lighting, Black Sunday is one of Mario Bava’s absolute finest horror films. Maybe it is imperfect, but that’s even more reason to love the chills and frights that Black Sunday provides.