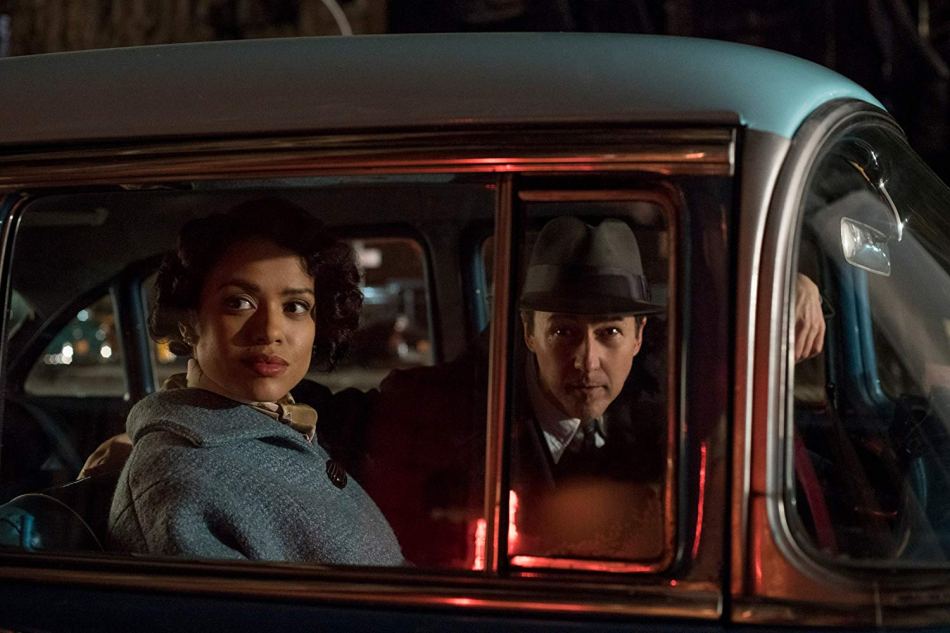 Nearly two decades after his directorial debut Keeping the Faith, Edward Norton has returned to direct, write, produce, and star in his sophomore feature, Motherless Brooklyn. Known for demanding a high level of control in all his projects, even going so far as to rewrite screenplays and consult in the editing rooms of films he previously starred in, Norton’s dedication to this long-gestating passion project is evident in every frame, even if the style won’t necessarily delight all viewers.

Edward Norton first became attached to the project in 1999, after the publication of the Jonathan Lethem novel of the same name, and the critical acclaim he received for back-to-back leading roles in American History X and Fight Club. It was to be his debut as a director, but the production continually fell apart and he instead directed Keeping the Faith before disappearing from directing for nineteen years. Despite various setbacks to the project over the last two decades, Norton continued developing the film, often unsure of what roles he would fill in the production when it finally came to fruition. While working on a variety of other projects, ranging from acclaimed dramas like Best Picture winner Birdman to a slew of Wes Anderson films to the Marvel Cinematic Universe, Norton finally commenced filming for Motherless Brooklyn in early 2018.

Though the novel took place in the modern day, Motherless Brooklyn underwent significant rewrites over twenty years both to make it more relevant to modern day politics and to allow Norton to explore the world of noir. This all resulted in the final version being set in the 1950’s and including a whole cast of supporting characters and a plot about urban development that was entirely absent from the source material. The added aspects are clearly differentiated from the preexisting ones in the film, as they were apparently what held Norton’s interest and were developed with much more care. The storyline about the corrupt city government, Norton’s biggest addition to the story, took center stage for the majority of the film’s runtime. The few characters that were kept from the novel remained fairly flat in the limited time they had on screen, apart from Lionel Essrog, the protagonist portrayed by Norton himself. Essrog, a detective who investigates the death of his friend and mentor, suffers from a mental affliction that is never identified within the film but can be assumed to be Tourette’s, as he sporadically contorts and twitches and shouts strings of loosely related words and various verbal tics, notably “if” whenever things get a bit too uncomfortable. The role had the potential to be overly showy but, not to say Norton didn’t play up the theatrics of it, it is always kept acceptably restrained. Though Essrog’s portrayal was slightly uncomfortable at times, especially when leaning entirely into an episode, and appropriately arrogant in the moments where Lionel’s photographic memory proved the only thing that could propel his investigation forward, it was never unacceptable and always showcased Norton’s acting talent. Aside from Norton, most members of the cast, including Gugu Mbatha-Raw, Willem Dafoe, and Bruce Willis, don’t have much to work with but make the most of their screentime. Alec Baldwin is easily the most memorable, playing a corrupt, racist, and power-hungry politician; there are no illusions to be had surrounding Baldwin’s casting and where the film hopes to come down on current events.

Outside of some clumsiness in the script that leaves some characters feeling underdeveloped and the film a bit long, the investigation is compelling, if predictable, and wonderfully atmospheric. The 1950’s setting is immaculately executed and presents a gritty but beautiful version of New York City (though some of the effect is  lost occasionally in the cinematography – quite strange considering Dick Pope’s general reliability in the past). Still, Daniel Pemberton‘s score, with wonderful additions from Thom Yorke and Wynton Marsalis, manage to keep even the most poorly executed parts from totally distracting from the experience. Though Edward Norton’s passion is clearly what keeps certain aspects of the film afloat, his dedication apparently doesn’t extend to every aspect, and some parts are left seeming unfinished despite nearly twenty years of work.

Motherless Brooklyn has plenty of flaws that are hard to overlook, and perhaps they shouldn’t be, but it managed to hook me nonetheless. It presents something not unlike the old pulpy noir films I’ve spent years watching on nights when I need something with a little more substance than your standard action fare, but not quite enough to keep me up thinking . It’s comforting cinema that grabs you with its more outlandish aspects then settles into the familiar format of an old televised noir, and it will certainly be welcomed into my rotation for future sleepless nights.