John Carpenter’s Halloween solidified the slasher film as a genre to rule over horror for the foreseeable future. Imitators and sequels followed suit and made millions upon millions of dollars, but it’s well documented that Carpenter himself wasn’t pleased with Halloween’s role in the creation of the subgenre. In fact when asked about returning for a third installment, he and producer Debra Hill vowed not to take part unless it veered away from Michael Myers and told an original story, turning the franchise into an annual anthology of holiday stories akin to Creepshow or The Twilight Zone.

British science-fiction author Nigel Kneale (the creator of Quatermass) was brought on to write the script, with Carpenter’s friend and longtime collaborator Tommy Lee Wallace hired to direct. Of course Kneale’s science-infused screenplay disappointed the studio and led to rewrites from both Carpenter and Wallace, with the latter receiving sole credit merely due to Kneale’s disapproval of the final product. It seemed as though the decision to continue the Halloween franchise without Michael Myers was doomed from the start; when it released the film bombed, audiences seemed to dismiss it just as quickly, and critics scathed it. However, Halloween III: Season of the Witch represents a bold move against studio filmmaking, one that’s alarmingly synonymous with its themes and that when considered as a standalone film finds a new lease on life.

In the week leading up to Halloween itself, Dr. Daniel Challis (Tom Atkins) finds himself wrapped up in a conspiracy theory after a patient is murdered in the wing of his hospital by a suited man who immediately sets himself on fire afterwards. Suspecting foul play, he investigates the factory that manufactures the halloween mask he was clutching onto throughout his entire visit and stumbled across sleuth Ellie Grimbridge (Stacey Nelkin), the man’s daughter, also curious about his demise. The two of them make their way over to Silver Shamrock Novelties only to uncover a dark conspiracy centered around their ridiculously-catchy adverts for their trio of Halloween masks.

Tommy Lee Wallace actively describes the film as a ‘pod’ movie rather than a ‘knife’ one, and after seeing it you understand why. By definition it has far more in common with cerebral scientific paranoia thrillers such as Invasion of the Body Snatchers or even The Wicker Man. Dan O’Herlihy’s Conal Cochran keeps the town of Santa Mira (funnily enough the location of the original Body Snatchers) on lockdown. The streets are empty by six o clock and the townspeople are all wearing false smiles and CCTV camera watch Challis and Grimbridge from the moment they enter.

Whilst it’s more tame than the slasher pretenses of the previous installments, the death scenes in Season of the Witch are nothing to joke about, strengthening the allusion of paranoia. Cochran’s plan in using a stolen piece of Stonehenge (yes, really) to drain the life from all the children wearing their Halloween masks by emitting a specific frequency in their television commercials is notoriously silly when said out loud, yet within the context of the film it achieves the ‘witchcraft meets science fiction’ angle that Carpenter and Hill sought after. In fact, the film’s not-so-subtle bashing of corporate greed is one of its main draws. Silver Shamrock evil intentions hide behind the catchy jingles and friendly nature of Cochran’s behavior with his customers. Only a huge company would have the ability to pull off the operation, yet it’s framed under the taboo-actions of killing children on screen which fires back at the suit-wearing army of CEOs and businessmen. It’s hardly revolutionary storytelling but it’s different and fascinating that the Halloween series could have been an annual telling of stories such as this.

Special effects artist Tom Burman alongside Wallace use the film’s Halloween themes to apply the notion of a practical jokes into its death scenes. Rather than violent slashes we have eye-gouging and skull-crushing at the hands of businessmen. The bizarre tactics of the Silver Shamrock masks are introduced through a fairly terrifying laser effect that fries off a character’s mouth, whilst the most famous scene is left for last. As young Buddy watches the commercial in his jack-o’-lantern mask, Wallace and his team take glee in melting the young boy’s face and reducing it to a pile of crickets, cockroaches and snakes. It’s a scene that can still go toe-to-toe with Myers in terms of violence, though arguably Buddy’s demise rings more memorable than any of his own killings whilst also bleeding into the uncertainty of the oblivious young trick or treaters out during the holidays.

There are elements of the film that veer into silliness. Cochran’s army of androids provide a useful entry mystery for Dr. Challis to become involved, but soon tear down any notion of tension that the film manages to build up. Challis himself feels one-dimensional, as do the rest of the cast. It would be interesting to see whether Kneale’s script focused more on characterisation, as it’s due to the slow-burn of character behaviour that films such as The Wicker Man succeed. Overall the film’s parallels to old Celtic fairy tales in order to establish the return of witchcraft through the use of Stonehenge is an admirably-ludicrous plot device, something ripped straight out of an episode of Doctor Who. However, it’s never fully established well enough and the so-called ‘witches’ that featured prominently in the film’s promotional materials are used for a solitary still within the movie and nothing else. Many of the ideas at play within Season of the Witch would ensure its continued relevance should it have been a standalone film, yet the association with Myers left the film to die.

That’s not to say both Myers and Jamie Lee Curtis are absent from the film – in fact a bar makes fleeting reference to the original Halloween premiering on television at the time, and Curtis has an audio cameo as a curfew announcer in Santa Mira. But whereas the original Halloween had fairly little to do with the holiday, Season of the Witch manages to embrace its timing as a central part of its plot. After Buddy’s demise, Challis races against time in order to stop the commercial’s broadcast as children across the country make their way home against the sunset of California. It’s an iconic image and one that encompasses a Halloween-fuelled nightmare that arguably wouldn’t be seen again until Mike Dougherty’s Trick ‘r Treat. 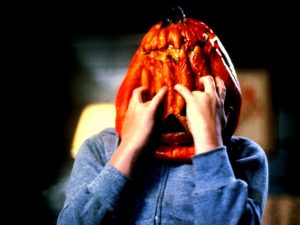 It’s a high message to go out on too, and Challis’ futile efforts at pulling the commercial whilst on the phone with the networks captures the same tone of societal hysteria as Dr. Bennell warning ‘you’re next!’ at the end of Invasion of the Body Snatchers. Season of the Witch is a film mistreated by its title alone, and whilst slasher fans would see Michael Myers again six years later in Halloween 4: The Return of Michael Myers, they’d miss out on what could have been a series of original and diverse stories centered around Halloween itself.

Now, why not gather in front of your TV sets for the big Silver Shamrock giveaway?

0 comments on “Restrained Corporate Paranoia in Halloween III: Season of the Witch”