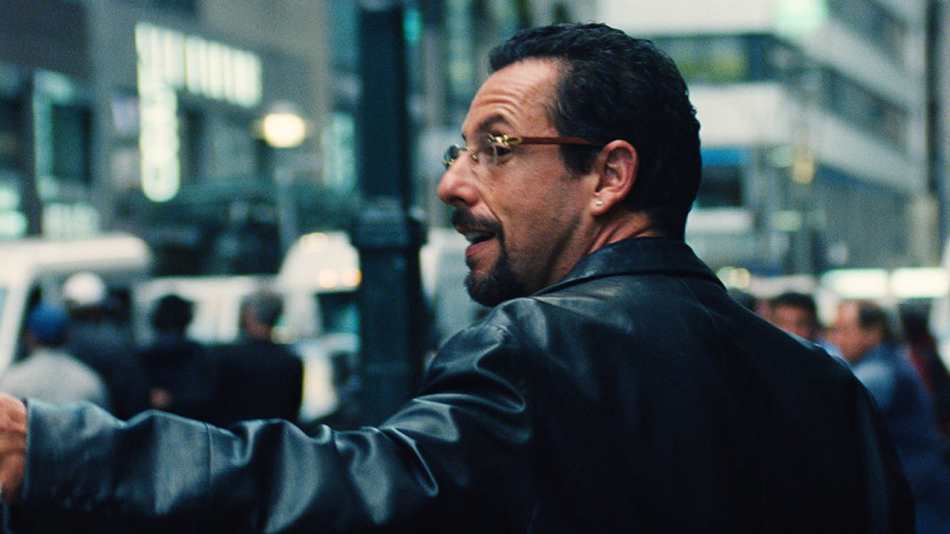 Ever since their 2010 feature debut Daddy Longlegs, Josh and Benny Safdie‘s work has centered around hustlers wallowing in their own self-imposed hells, trapped in infinite loops of poor decision-making and questionable (if not outright dangerous) pursuits of self-fulfillment. Recurring undercurrents of existential dread and tragic pathos run through all of their films, from Ronald Bronstein‘s devastating portrait of the directors’ own father in Daddy Longlegs, to Arielle Holmes‘ suicidal heroin addict in Heaven Knows What, to Robert Pattinson‘s sociopathic bank robber on the run in Good Time. In many ways, Uncut Gems represents the ultimate synthesis of the Safdies’ work thus far, distilling their limited iconography of hustlers, problematic dads, and addicts into a messy timebomb of claustrophobic anxiety. While the film may lack the polished efficiency of its equally brilliant predecessor Good Time, it compensates with a striking step up in grimy charisma and directorial confidence. 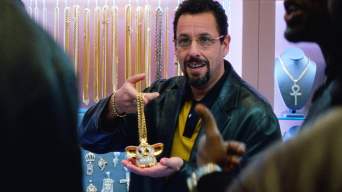 It also has Adam Sandler, who stars here in unquestionably the best performance of his entire career as Howard Ratner, a Jewish jewelry store owner in his late forties with a nasty gambling habit and an imploding marriage. We enter the film literally in his ass, zooming out of a colonoscopy scan after a brief prologue in the film’s opening moments. By the time we formally meet him, it’s not hard to tell that Howard is in deep trouble, owing substantial sums of money to various loansharks for excessive sports betting. He plans to amend his situation by selling a rare black opal (supposedly worth over a million dollars), but a variety of stressful setbacks – including Kevin Garnett, family duties, a pair of creepy twins, an affair with one of his employees, and a violent debt collector – all threaten to ruin the sale and topple his life at any given moment.

Unlike the constant thrill of imminent arrest chasing Robert Pattinson through Good Time, Uncut Gems is afforded much more breathing room to dole out its stress in limited (but just as intense) bursts of panic. Its deliberate pacing is ingrained with a patient menace, setting up all the narrative threads for its disastrous conclusion before gradually pulling back the curtain to reveal the severity of the stakes. Many of the film’s most memorable scenes are the ones that erupt into magnificent explosions of rage, screaming, and profanity, but just as insightful are the scenes of relative quiet. It’s in these little moments, like when Howard humorously hides in a closet while he sexts his mistress, or when he stops by his New York City apartment with his son, that the Safdie brothers demonstrate their increasing maturity and mastery over filmmaking. These scenes aren’t economic and they don’t add anything of immediate value to the plot, but they’re absolutely essential to immersing us within the film. As incredible as Robert Pattinson is in Good Time, Howard Ratner simply feels more like a real person. And it’s precisely because of those seemingly inconsequential moments that he does. 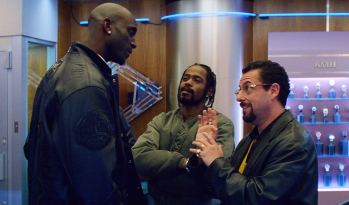 Of course, much of the film’s authenticity is also heavily indebted to its phenomenal cast – especially Adam Sandler, who disappears into character so astonishingly well that you genuinely forget he’s acting. Howard Ratner is a sleazy hustler with an obviously inflated sense of self-worth, but amazingly it never feels like Sandler is leeching off his own well-established persona for the performance. The rest of the cast, while given considerably less to do, are all equally terrific. Lakeith Stanfield gives a remarkably understated performance as Howard’s cool-headed associate Demany, and Julia Fox makes an excellent acting debut as his loyal mistress Julia. Every single role feels like it’s coming from a real person with their own unique story, and the abundance of non-actors in the film helps tremendously in convincing the audience of its credibility. I especially like Kevin Garnett and The Weeknd playing themselves – although it might sound pointless to praise someone inhabiting their own personality, both performances feel so effortless and devoid of a traditional celebrity ego that I was honestly taken aback.

Uncut Gems has long been a passion project for the Safdie brothers, and as their “biggest” film yet it’s not hard to see why. The two brothers have never needed a particularly large budget to craft highly believable worlds and excellent films, but with more resources at their disposal it’s exciting to imagine the endless possibilities awaiting them as blossoming artists. Each and every film they’ve made since Daddy Longlegs has expanded in scope but sharpened in focus, pinpointing their harsh observations on human weakness, materialism, and modern life with growing concentration and pity. If this upwards trajectory is any indicator, the Safdie brothers may very well be on their way towards joining the ranks of the greatest legends in American cinema.