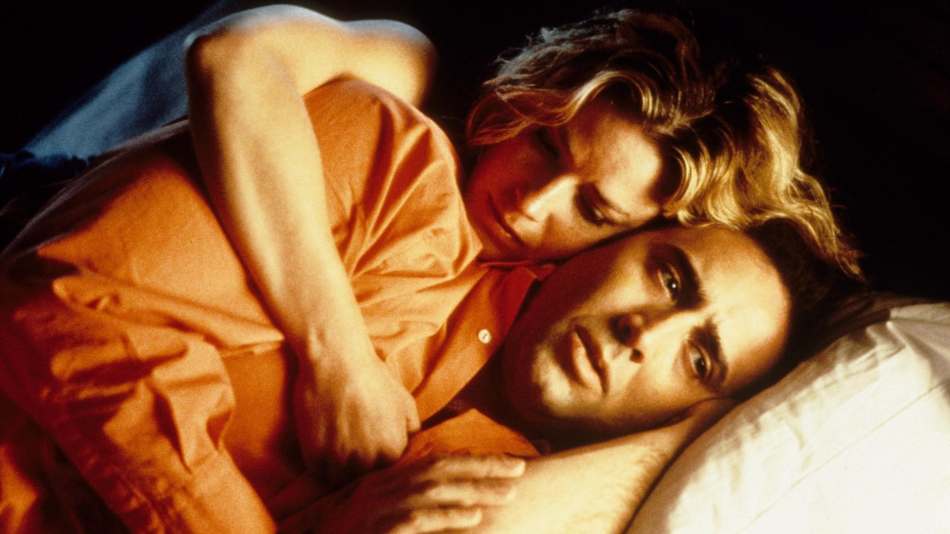 Love is an optimistic feeling. Besides offering an immediate sensation of fleeting joy, it promises a future where that feeling of yearning is replaced with a more stable contentment. Relationships, after all, are built around the idea of two people connecting and mutually improving the lives of each other. Love is so often characterized as a selfless act, but in the context of Leaving Las Vegas it’s actually quite the opposite. Among a great many other things, the film is about this dichotomy between the empathetic bond between two people and the selfishness of requiring that connection in the first place.

Leaving Las Vegas opens on alcoholic LA screenwriter Ben (Nicolas Cage) dancing through a liquor store with a shopping cart full of booze. It’s clear that he is nearing the end of his days as a functioning alcoholic – his brother is cutting him off, his boss is firing him, and even his regular bartender is getting tired of serving him a gin and tonic every morning. With his severance pay, Ben drives off into the desert for Las Vegas to drink himself to death, which he approximates will take “about three to four weeks”. After almost drunkenly hitting prostitute Sera (Elisabeth Shue) with his car, he enlists her services for $500, only to realize that what he really wants isn’t sex but a simple conversation. The two forge an unlikely bond as “the drunk and the hooker”, never sleeping together but enjoying each other’s company as the former carries out his extended suicide plan.

“I don’t remember [why I want to kill myself]. I just know that I want to.”

There’s an ethereal sadness permeating every moment of Leaving Las Vegas, expressed through the shimmering red fluorescent lights of Sin City and the film’s repetitive, lonesome soundtrack. Even its manic, New Wave-style of editing feels like a rebellious flourish meant to distract from the underlying tragedy at hand. Every glance and word exchanged between Ben and Sera reflects a mature understanding that their relationship is hopelessly doomed. Soon, Ben will be dead, and Sera will return to being just another lonely prostitute on the Strip. 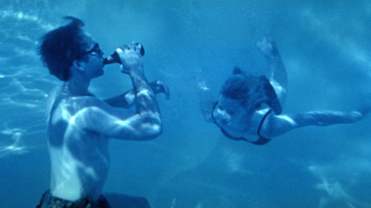 Through the act of watching them together, one gets the sense that both of them are the first people in their respective lives to truly understand each other – Sera is the first person in Ben’s life that accepts him despite his drinking, and Ben is the first person in Sera’s not to reduce her to a sex object (“I’m an equation most of the time”, she explains in an early scene). The most telling measure of this fatal pact comes when Sera buys Ben a flask as a present. A dark look crosses Cage’s face as he opens the gift – when he follows with “It looks like I’m with the right girl”, he seems at once deeply appreciative for the selfless gesture and utterly ashamed that his life has been reduced to such a humiliating display of self-destruction. It’s a moment that’s both endearingly tender and immensely heartbreaking, and probably the best scene in the entire film.

While relationships most often represent a chance for personal and social growth, Leaving Las Vegas presents a much more complicated picture. Ben and Sera understand that their time together is painfully short. It could be longer, of course, if Sera helped Ben get sober and convince him of the value of living (as she briefly attempts late in the film), but doing so would unravel the one connection keeping them together: their unconditional acceptance of one another. Their relationship is a remarkably precarious one, predicated almost entirely on a blind trust in the other’s actions. And while it is a deeply selfish love – both of them comprehend and fully admit they are using one another to ward off loneliness – their unequivocal respect towards each other’s flaws might also just be the most compassionate display of love one can give.

At its core, Leaving Las Vegas is a film about the incalculable worth of genuine human connection – not in the saccharine, overly-sentimental way of a typical Hollywood romance, but in the quieter, seemingly insignificant moments that demonstrate the almost impossible level of understanding its characters show to one another. Its events are genuinely tragic, but just as Sera chooses to withhold her judgment over Ben’s actions, so too does the film require its audience to suppress their moralizing glares over what it depicts. Deep down, I think everyone longs for the type of profound love Leaving Las Vegas portrays and represents. Hopefully, unlike Ben, we don’t have to reach the end of our world to find it.