The second feature from Chilean director Théo Court, White on White, is set in Tierra del Fuego, an archipelago off the southernmost tip of mainland South America. The film is an achingly still and glib period piece, focusing on photography as a vehicle of translation for genocide and conflict at the start of the 20th century. An experienced photographer is hired by a rich plantation owner to travel to Chile’s Antarctic region and photograph his bride to be on the eve of their wedding. Equipped with his daguerreotype camera, Pedro (Alfredo Castro) is unexpectedly torn between innocence and dangerous obsession as art and artist traverse several moral complexities. A blurred line between art and perversion is further blurred as Pedro finds himself on the edges of the world, lost and at odds with his plans to return home. To further his inner peril, he finds himself photographing the genocide of the Selk’nam people. 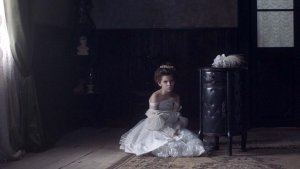 From the outset White on White establishes Pedro’s intentions to capture his subject’s ‘aura of purity’, taken back by the bride’s youth and beauty. With no sign of his employer, the groom and plantation owner, the photographer Pedro is stretched beyond his means when payment doesn’t come, resorting to seek employment documenting hideous and atrocious acts of genocide. In a bleak exploration of an artist’s culpability, the film occasionally suffers from an ironic photographic stillness that hampers fluency in plot and narrative. Whilst the cinematography is impressive, its cold and icy aesthetic is held back by pacing and structure- more concise editing could have salvaged a film that appears to be lost within itself at times. In tying with  a shift of theme midway, there is a somewhat unconfident management of themes from loss and obsession to the brutality of mass murder and its shameful justifications.

Surveying the icy terrain, Court employs several visual juxtapositions to project his protagonist’s inner turmoil. Though we know the photographer oversteps his professional bounds, Court allows the audience  their own interpretation of how and why exactly Pedro begins his unhealthy and creepy interest in his initial subject. The shift in narrative quells any deeper investigation into a potentially paedophilic theme, with a clearly damning and guilt ridden task awaiting the photographer. Bearing witness to humanity’s evil capabilities in the name of progress, the balance of Pedro’s evident emotional dismay is uneven in the films two parts. Told of his importance in the documentation of history, the disturbing horrors unfold, and the film is more successful when its violence is accompanied by chilling dialogue.

Comparisons and parallels arise between Lucrecia Martel‘s Zama, specifically the portrayal of passive and complicit protagonists present in abuses of imperial horrors. The brutality of White on White and its sentiments on whitewashing history through the aesthetics of art push boundaries further through hyper-stylised violence. White colonialism as a specific theme requires a delicate approach, in which Théo Court succeeds even if the film’s uneven structure occasionally tips the balance towards the absurd. The surgical precision of José Ángel Alayón’s cinematography employs long, static takes that compliment the themes of a photographer insistent on an immaculate image. Stylised violence and an aesthetic sense of bitter irony employed to tell an oblique story of genocide makes White on White a difficult watch. In particular, the distance established by the film’s cinematography employs this ironic voyeurism over blatant outrage at the themes it displays, making for a challenging view that flits between engaging and disenchanting. Court and Alayón have created a distinctly haunting feature that, for better or worse, sears itself into the memory. Be it through the guise of creepy, ambiguous leering at a pre-teen to the images of merciless missionaries standing over the corpses of Aborigines.