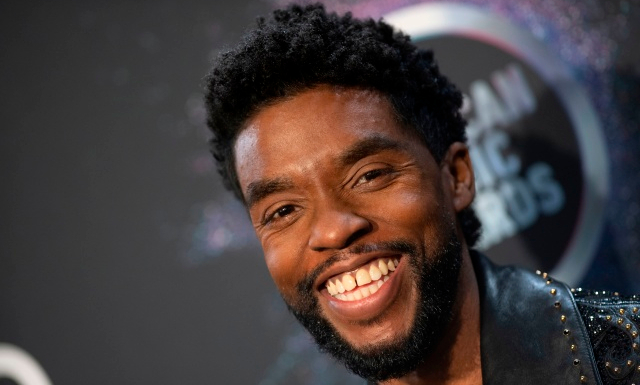 In a year of immense dysfunction and tragedy, Chadwick Boseman’s death still came as a shock to all. Since his passing, numerous actors & actresses have came forward with stories demonstrating Boseman’s immense strength and humanity exhibited both on- and off-screen prior to his death of colon cancer at the young age of 43. In this month’s retrospective, we share a number of our favorite Boseman films and hope to capture the best we can how beloved and talented of an actor Boseman was. Rest in Power.

42 lays bare Chadwick Boseman’s ability to command a room. Through the portrayal of one of the most critical chapters in modern sport, Boseman plays the titular 42nd Brooklyn Dodgers League player Jack ‘Jackie’ Robinson, famous for being the first Black player to break the unwritten color line of Major League Baseball. Based on true events of Robinson’s career, one situated within the Jim Crow era, we see Robinson balance what was once a controversial duality: being a Black man and a competitive League baseball player. As faithfully explored by the film, Robinson endures unremitting discrimination on and off the field; he is confronted with the worst of America’s racism and hostility towards Black athletes that we can, of course, still recognise today.

Written and directed by Brian Helgeland (A Knight’s Tale), 42 is evidentially concerned with reconciling the figure of the hero and the outsider through the character of Jackie Robinson, and, more urgently, with reconciling racial segregation altogether. Unfortunately, within the film’s remit, taking on the latter proves to be a difficult task. Whether its perspectives are faithful to the reality of the era or not, the film espouses discernibly lacklustre racial empowerment. The legendary Brooklyn Dodgers manager Branch Rickey (Harrison Ford) asserts that Robinson must “turn the other cheek” to racial hostility, and that there is greater courage in not fighting back than in standing up for oneself. While this rhetoric is far from autonomous, but reminiscent of the period, it is not out of place with the rest of the film’s tone and dialogue, laden with antiquated perspectives on race – a coach actually utters the words “I don’t care if [Robinson] is yellow, black, or has stripes like a zebra”. Thus, although several moments are doused in strident colour blindness and flimsy anti-racism, 42 as a whole does, at least, allocate space for Boseman to perceptively navigate Robinson’s character. Chiefly to this, Boseman stands entirely above 42. His performance is much greater, more powerful, than the written role permits. As an inspiration himself, Boseman’s portrayal of the iconic Jackie Robinson is cinematic layering at its most resonating. If people had forgotten the legacy of Jackie Robinson, to be reminded through the acting power of Chadwick Boseman feels not only appropriate, but altogether historic. 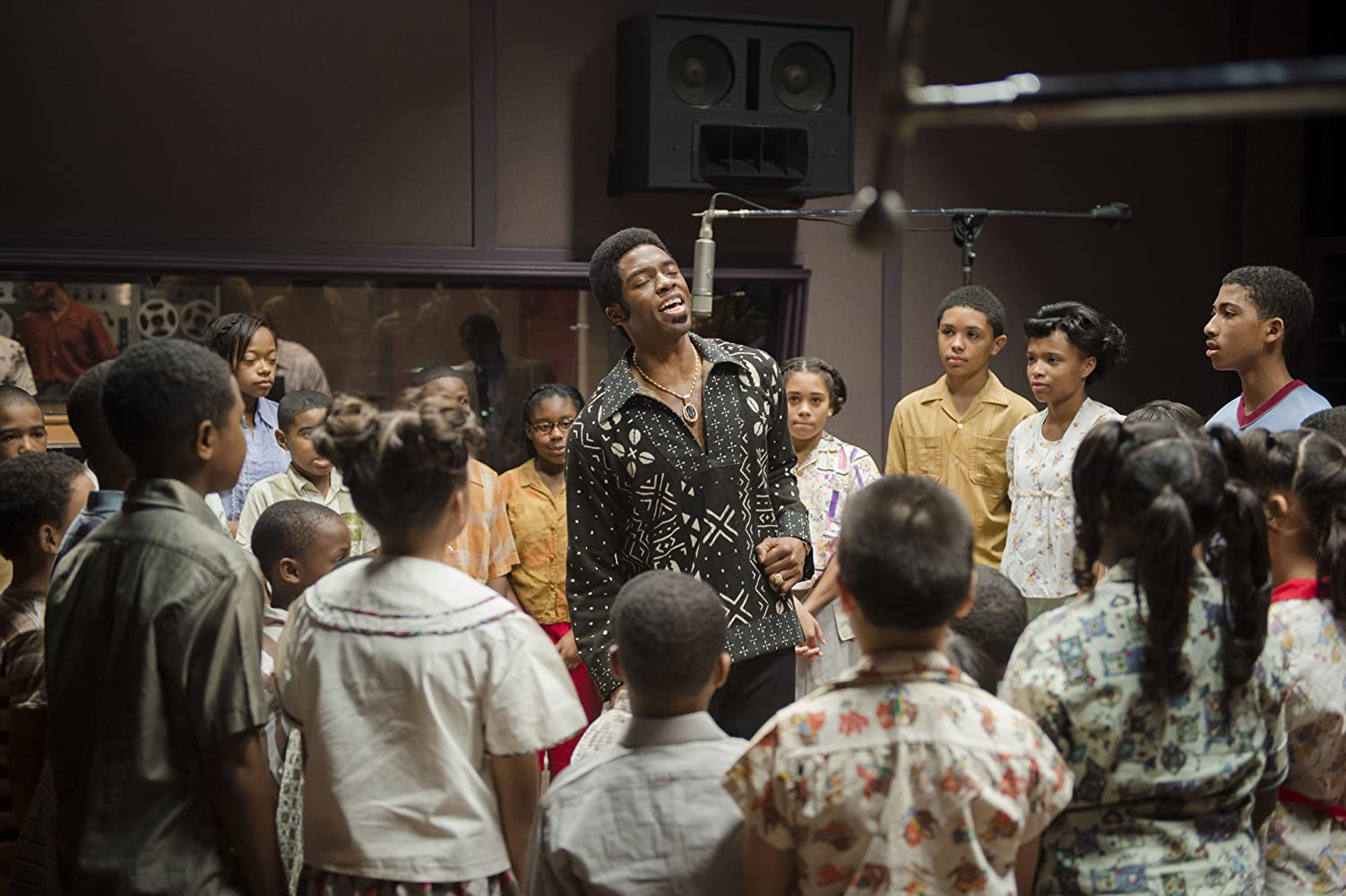 Musician biopics were a tired genre by when Get On Up came out in 2014. In fact, the genre had received such a thorough skewering with Walk Hard: The Dewey Cox Story that ensuing biopics seemed to go out of their way to not follow the genre’s typical story conventions. While Get On Up may not necessarily have been responding to Walk Hard, it managed to set itself apart with its creative, non-chronological storytelling that follows James Brown’s emotional journey rather than his literal one. Famous moments from his career such as his famous concert after Martin Luther King, Jr.’s assassination come off as logical outcomes of Brown’s personality and beliefs rather than obligatory pit stops. And of course, at the center of this film is an electric performance by Chadwick Boseman. Boseman looks nothing like James Brown and is at least half a foot taller than the singer, but he captures Brown’s physicality and larger than life personality perfectly. Even when he is acting like the cold and arrogant man that Brown could be, he is still charismatic and keeps our eyes on the screen. Boseman could disappear so thoroughly into a role that it seems like he gave the definitive performance for such iconic historical figures, but he also never forgot their humanity.

Though best known for his show-stopping roles as Black American heroes, as well as his four groundbreaking appearances as the Marvel hero Black Panther, Chadwick Boseman’s talent was no less apparent in his lesser known roles such as Message From the King. A Netflix original action film following a South African man who comes to America to avenge the death of his sister, it’s a far cry from the sort of inspiring stories Boseman often led but his command of the film raises it far above other films of its ilk. Always finding a way to make a well known persona his own, Chadwick Boseman took a character we’ve seen versions of before and gave all the confidence and strength familiar to it. Not only that, he also added layers of tenderness and emotion that made an otherwise generic revenge film feel like it had a real artistic force behind every decision. Much like 21 Bridges, seeing Boseman take on a character without all the expectations behind a well known person or character and being able to make them entirely his own was both a rewarding experience and a testament to his skill as a performer. 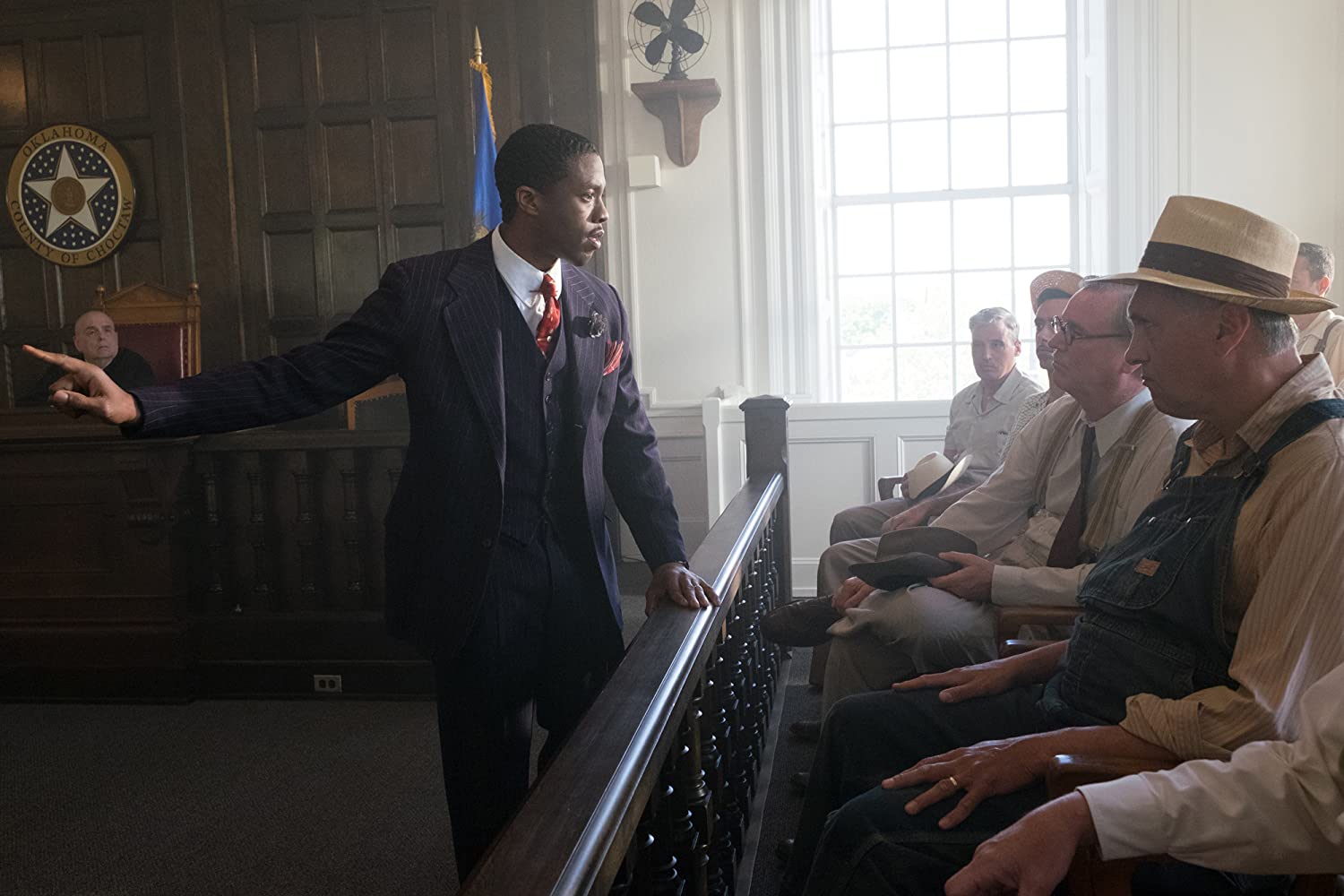 Between the release of the cultural juggernaut that was Black Panther, and said titular character’s introduction in Captain America: Civil War — Chadwick Boseman kept a persistent, albeit low-profile, presence in the film industry. Rather than relish in his downtime, Boseman was hard at work on two indie-budget projects. One of which was Reginald Hudlin‘s Marshall, a biopic about Thurgood Marshall, the Supreme Court’s first African-American justice, as he fought through one of his most infamous cases: the trial of Joseph Spell (Sterling K. Brown) in which an African-American chaffeur was accused of raping and attempting to murder Eleanor Strubling (Kate Hudson), a wealthy white woman.

Admittedly — much like the vast majority of the sub-genre — Marshall is a film that falls into the many pitfalls of the systematic, standard-fare biopic. That said, the quality of Marshall‘s script has practically no bearing on Boseman whose performance alone manages to invigorate and uplift this film beyond being aggressively passable. If anything, Boseman’s defiant depiction of Marshall spoke on behalf of his versatility — as well as, perhaps, the statement that Boseman wanted to make as an actor. Marshall was a noted advocate against racial discrimination in the American criminal justice system, and for Boseman to portray that role — among with many others of a similar nature — rather than relax with his newfound casting at Marvel, speaks volumes. In retrospect, knowing the unfortunate behind-the scenes circumstances, Boseman was a man that truly stood for what he believed in — giving it his all for each role, no matter how prestigious. 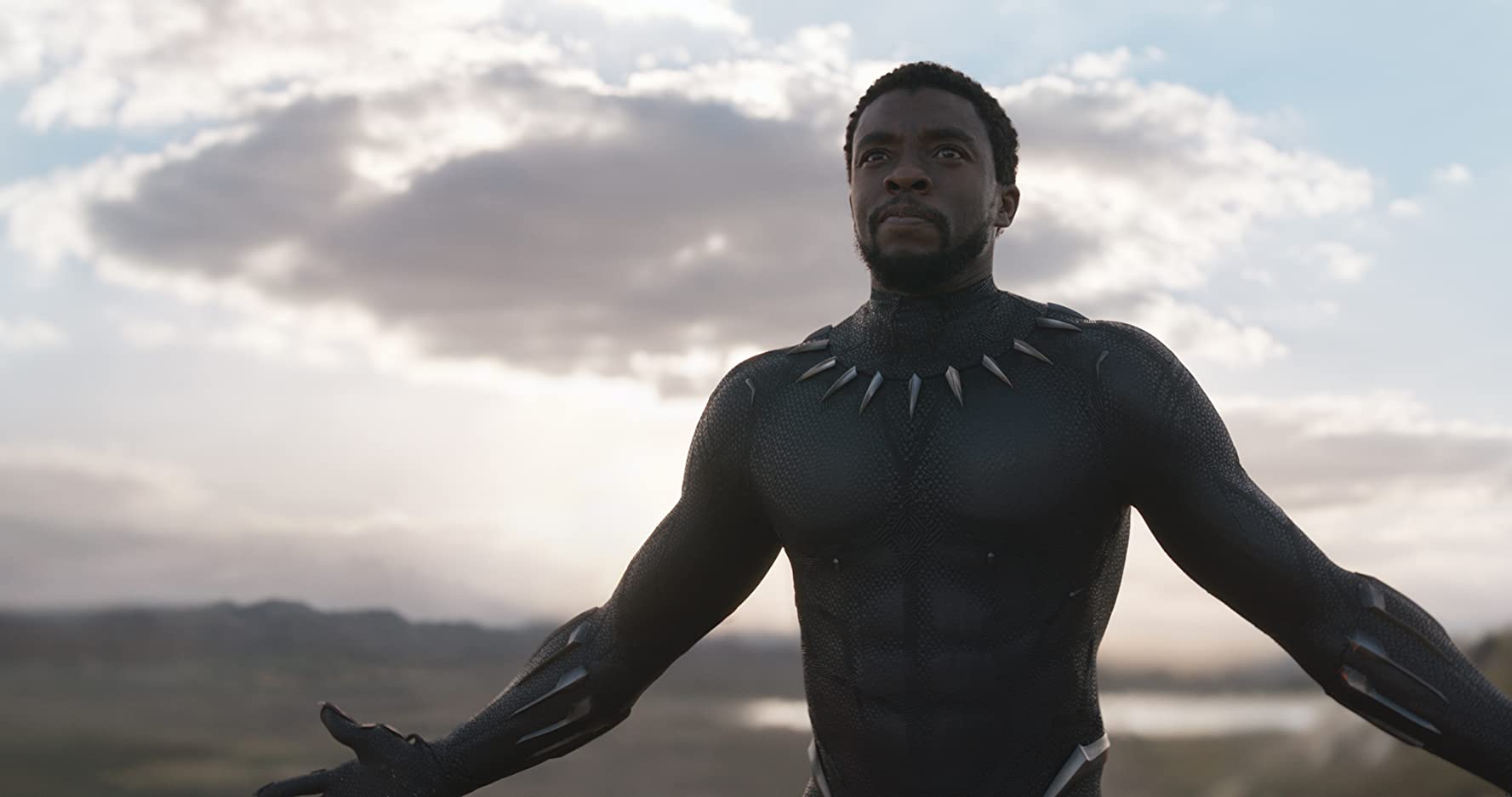 Chadwick Boseman seemed as if he was born to play the role of T’Challa, the Black Panther. While being a comic book adaptation, Black Panther delves into themes of racial prejudice and the different responses to it. Despite Black Panther‘s antagonist Erik “Killmonger” Stevens (Michael B. Jordan) having a comprehensible yet menacing answer to racial discrimination, T’Challa’s approach is reconciliatory. He wants to work with those who have potentially marginalized people of colour rather than overpower them.

Boseman visited South Africa, studied various prominent people from the country, and learnt numerous forms of martial arts in preparation for the role. In addition to embracing the physical and intellectual demands of playing T’Challa, no doubt Boseman was also aware of what Black Panther would mean to Black audiences. The film signifies an eagerness in Hollywood to address racial inequality and provide representation for Black people in cinema. The resolve behind Boseman’s acting is a major reason Black Panther was a smash success, earning respect and admiration for his performance.

According to Spike Lee, neither he nor any member of the cast or crew of Da 5 Bloods were aware that Chadwick Boseman was dying. Lee’s genre-bending reflection on Vietnam, current politics, and the never-ending struggle of African Americans finds the actor in a haunted role as “Stormin’” Norman, the late commanding officer of the Black American squad known as the Bloods, composed of Paul (Delroy Lindo), Otis (Clarke Peters), Eddie (Norm Lewis), and Melvin (Isiah Whitlock Jr.), who have returned to Vietnam to track down a bounty of gold they discovered during the war. Norman was the only member of the Bloods to not make it home from the war, and his tragically early death affected every one of his fellow soldiers, especially given his status as an inspirational Black figure to all of them. The (apparently) accidental meta-textual relevance to Boseman’s own circumstances gives the role an obvious power and resonance that just didn’t exist mere months ago when the film was released, and perhaps no clearer an example of this exists than Lee’s choice to shoot flashbacks with the original actors – no younger stand-ins, no de-aging technology – making it painfully impossible to ignore the realization that we will never get to see Boseman grow old as an actor. I’d like to think Boseman knew what he was doing when he accepted his part as Norman and found some kind of solace with the character, knowing that he too wouldn’t get the time to see the impact he had on all the lives he touched. Either way, it’s a truly remarkable performance, and it will be forever heartbreaking that it is one of the final performances from a talented actor who was by all other means just getting started.

0 comments on “The Films of Chadwick Boseman”