Director Phyllida Lloyd‘s previous two films are well-ingrained in British culture but for very different reasons. Her directorial debut was the ABBA musical Mamma Mia! which was a box office hit, and expectedly so, given the millions of Brits who still sing and dance to the band’s music, not to mention the countless tribute acts that perform them. That was followed by the Margaret Thatcher biopic The Iron Lady, the film’s subject not revered by many Brits. Her latest feature Herself (her first in nine years) might also appear familiar to many people in Britain because it focuses on significant socio-economic problems within British society. 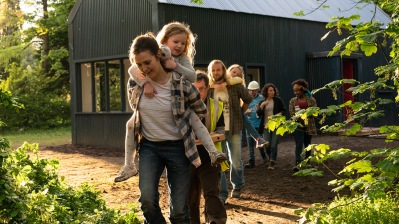 Sandra (Clare Dunne) is a young mother who wants to escape her abusive husband, Gary (Ian Lloyd Anderson). Unfortunately, the housing system in Dublin is not sympathetic to her needs, nor to the welfare of her two daughters. They are put on a waiting list for housing and put up in a hotel room for temporary accommodation. Sandra also struggles to make ends meet having to work two jobs that don’t even provide enough income to move forward. Despite this, she decides that the only way to get her own home is to build it herself. However, the bank won’t loan Sandra the money, and people are reluctant to help her even construct it. Peggy (Harriet Walter), a lady Sandra cleans for, decides to give her the land at the bottom of her garden and loan Sandra the money.

Herself opens dramatically, displaying the intimidation and domestic violence that Sandra has suffered. It is the only scene in the film to do so, but it is enough to leave a haunting and lasting impression. The scene suggests that this is not the first time Sandra’s husband has attacked her. Anytime they have a scene together Dunne excellently shows how she fears him, and we know that her fear has likely built up over many years. Her restraint comes across as so genuine that the audience will wince just in his presence.

Despite the uncomfortable scenes, Herself has many sequences that illustrate a magnificent community spirit between people. It shows how anyone from any background can have aspirations, even in the face of adversity, and sometimes we need to be reminded that strength in numbers can have its dividends.

Some audiences might find Herself conventional at times and perhaps a little pandering with the use of popular music from the last decade. It would have been better to hear more original music, though familiar musical choices could engage admirers of Lloyd’s previous work.

Some will enjoy Herself because there is similar lightheartedness about it to Mamma Mia! Others might think that the tone contradicts the subject material, but it makes Herself more accessible and not draining to watch. There is a sense of predictability about Herself, yet the climax provides a welcome surprise for audiences.