Mexican writer-director Michel Franco is known for making intimate and intense dramas where characters often deal with their pain alone. His latest feature, New Order, shows how the impoverished working-class people of Mexico take united action against their suffering. Like Bong Joon-ho‘s Parasite, which had global appeal beyond South Korea, New Order focuses on a problem that is not only evident in Mexico but worldwide. 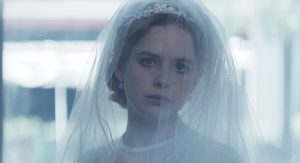 Marianne (Naian González Norvind) and her family are celebrating her recent marriage with a lavish party in her opulent home. It is clear from the start of New Order that something ominous is afoot when Marianne’s mother discovers a running tap that flows with green paint and a wedding guest turns up with her face splattered with it. It becomes apparent that there are riots within the city that have escalated out of control and soon affect the celebration.

The intensity in the opening act of New Order slowly builds until the chaos truly begins, after the film then sets off on a hectic pace. The opening seems to act like a fable and forewarn Marrianne and her family of the change coming when a family friend asks for financial help. Her mother and brother treat him with contempt, but Marianne attempts to do more. However, regardless of their approach, they all suffer misfortune because of their wealth.

The brisk pace of events may come across as bewildering in New Order, as the initial action rolls into the days and weeks after the riots without any notice. However, it does show how large scale situations can quickly spiral beyond control, and it feels pertinent to the current international crisis with the pandemic. The audience contemplates the broader implications resulting from the riots. Similarly, as we see no conclusion to the present global struggles, the film’s climax brings no end to the situation it presents, and it feels even more relevant because of this.

There is some stark and striking imagery in New Order. Shots of the city devastated after the riots are well designed, with multiple vehicles left stranded and streets filled with bodies. It’s one of many harrowing sights, but some are too grotesque to watch that it’s likely to have audiences squirming away from them.

Parasite is not the only film that New Order draws comparisons with because of its themes, though the film is unlikely to achieve similarly universal acclaim. It is more likely to be divisive, like Joker, which also shares similarities in its approach to violence and an uprising against injustice. Despite the parallels it will have with various films, New Order feels distinct from them. Though it will be labelled as glorified and disregarded by some audiences, others will identify with the situation onscreen and find the dystopian happenings scarily plausible.

New Order is not the first film to focus on the disparity between wealth and class, but it certainly makes a brutal and stark impression. Strangely, I would have liked Franco to explore his material at greater length. With a runtime of eighty-five minutes and the rapid pace of the events that take place, it seems like this is just the start of something. Maybe that’s the point of New Order: that change is overdue, and without addressing the disproportionality of wealth, our society will implode with disastrous consequences.