Ben McDonald: It’s October again, and given the abundance of excellent films available on the Criterion Channel’s new ’70s Horror’ collection this month, we thought we’d take a look at something scary to fit in with the Halloween season. Our film this week is David Cronenberg‘s early body horror/zombie/pandemic flick Rabid. Released in 1977, Rabid comes two years after the Canadian director’s first horror feature, Shivers. Much like that film, Rabid follows a mysterious disease that turns people into violent maniacs. Yet Rabid is a much different film, a much weirder film, with a bigger budget and more expansively apocalyptic scope. The film opens with the motorcycle crash of Rose (Marilyn Chambers) and Hart (Frank Moore). Badly injured, Rose undergoes an experimental skin graft treatment that leaves her with a bizarre androgynous hole under her arm that emits a nasty phallic needle of some sort. Turns out, this new “organ” (if you can call it that) contains a new strain of rabies that turns its victims into raving zombies. Given that this is a horror film, it doesn’t take too long before Rose has managed to infect several people, gradually turning the movie into something of an epidemic movie. Before we dig more into the film, I’m curious – how much experience do you have with Cronenberg, Alex, and what do you generally make of his work?

Alex Sitaras: When you showed me the collection of 70s films, I was drawn to Cronenberg since I had only seen The Fly from him up till this point. I’ve yet to really explore the director’s filmography, but with Rabid I’m now two films in. I definitely recognize why his work in appreciated within the horror genre- he has a unique blend of body horror and hesitation/pessimism regarding advances in technology that give his work a thematic throughline. His films are also somewhat accessible for audiences if you can make it past the gross-out factor. One thing that stood out to me though with Rabid compared to The Fly was how grim the film felt. The film’s final scene is chilling without really requiring much acting or dialogue, and the color grading of the film consists of ghastly blues, greens, and greys. What did you make of Rabid? You had mentioned it was your second watch of the film.

Ben: Rabid falls at the very bottom of my Cronenberg rankings, but I think it’s an interesting film because it shows a lot of the characteristics that would define his later masterpieces like The Brood, Videodrome, Naked Lunch, and Dead Ringers – a noticeably dry and detached tone, weird body horror that often blends technology and flesh, pessimism towards scientific advancement, and just an overall grim outlook towards the future in general like you mention. Rabid is certainly one of the bleaker films he’s made, and probably the most overtly apocalyptic, but my main criticism of it is that it takes too long to get to its most interesting parts (the mutated rabies epidemic), and even when it gets there it’s not terribly different from many other zombie flicks.

I think there’s an interesting sexual undercurrent to the film, however, which is another very common Cronenberg trope. Did you pick up on that at all? 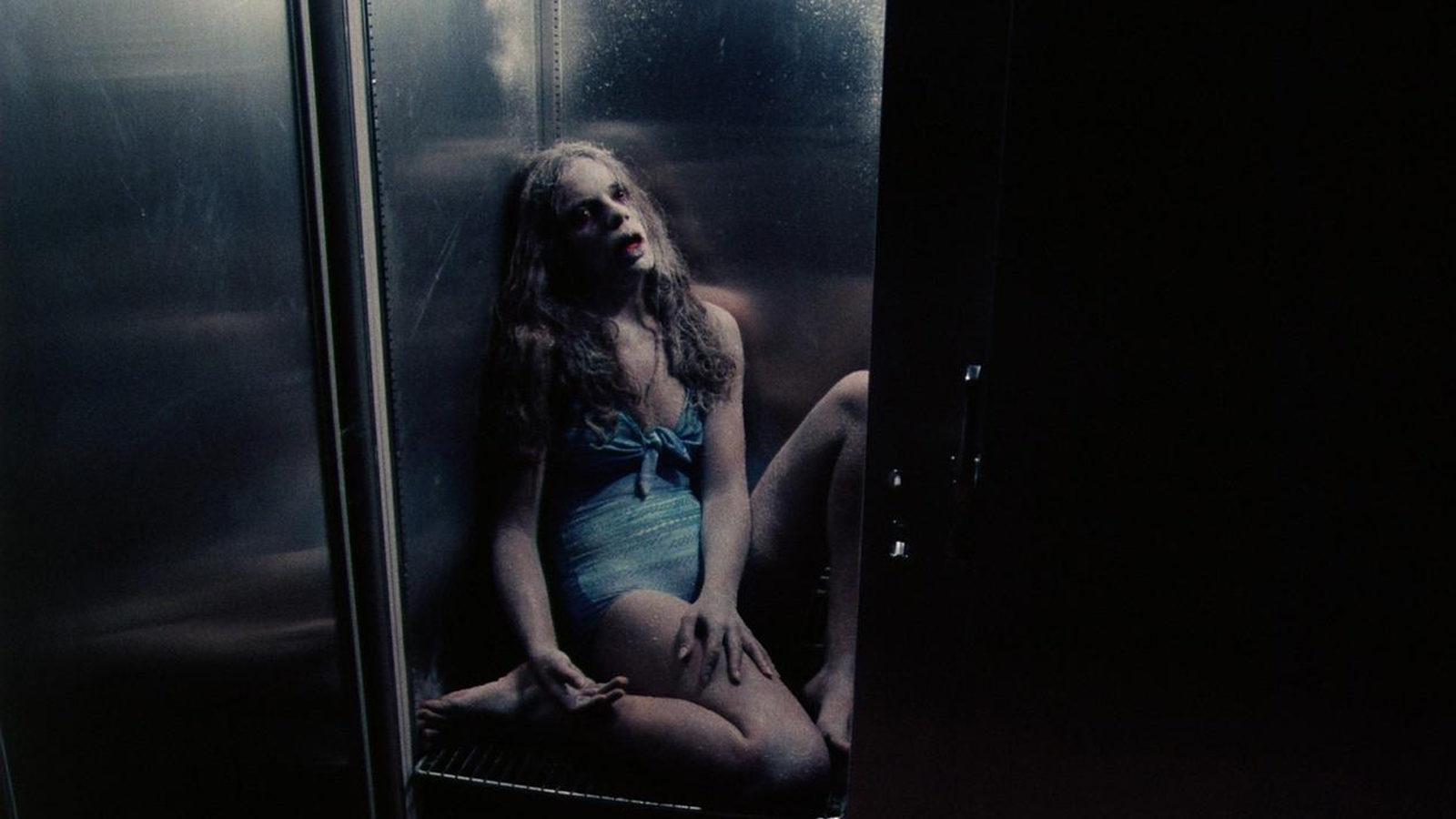 Alex: There’s definitely a sexual undercurrent to the film though, like you pointed out, there’s also a number of other themes that play a noticeable role in the story. In light of COVID-19, I was curious how Rabid would address the epidemic that occurs in the film, but apart from televised newscasts and the depiction of the police force, there wasn’t too much reflection from Cronenberg about the personal or emotional toll on the populace that the epidemic took. It is curious to hear that this is one of his more bleak features given the writing that I’ve read on films such as Videodrome.

Ben: I guess what I mean by bleak is that the film is overtly apocalyptic in a way that his other films quite aren’t. I think Videodrome is definitely more effective in its pessimism – and is definitely an apocalyptic movie in its own right – but it also only hints at what is given a more direct screen presence in this film, if that makes sense. And yeah, I agree that this film isn’t particularly interested in rendering the psychological horror of an epidemic like we’ve all experienced these past sevenish months – it’s far more interested in the blood and guts. I think that’s another reason why it’s not as effective as Cronenberg’s later films, because it doesn’t unify that body horror with its psychological horror quite as coherently as something like Videodrome or Dead Ringers.

What I do like about Rabid is that eerie sexual component though. In watching any of Cronenberg’s horror films, it becomes readily apparent that he is wary of sexuality – more specifically how it makes us vulnerable and powerless to outside control. In Rabid and Shivers, I feel like he channels this anxiety by rendering sexuality as something almost alien or inhuman. As the desire to reproduce is biologically hardcoded into our DNA and (debatably) not a part of our individual personalities, I find this to be a very compelling idea for a horror movie to explore, as horror movies are better suited than any other genre to allow us to question the disorienting psychological and societal boundaries we find ourselves navigating on a daily basis. In Shivers, an apartment complex is ravaged by a mysterious parasite that causes its inhabitants to turn into sex-crazed maniacs, like a perverse Invasion of the Body Snatchers crossed with Night of the Living Dead. In Rabid, the gross phallic organ that grows out of our main character Rose seems to force her to prey on the blood of other people (mostly men), eventually resulting in the bizarre rabies epidemic that the film closes with.

What else did you notice about the film, Alex?

Alex: One thing that drew my attention when watching the film was the morality of Rose’s character. At times she seemed to feel cursed with being patient zero for the disease while other times she seemed to willingly partake in spreading the disease through feeding on human blood. I’m guessing the reason for this was to attempt to convey some psychological challenge Rose had with grappling with her needs because of the disease, but it wasn’t entirely convincing on Cronenberg’s part. It seemed as if Rose would act in a certain manner to push the plot in a given direction or to provide scares & tension rather than be entirely consumed or not consumed by the disease. A newscast suggests that she, as patient zero, will not come to a grave end in living with the disease but at the same time, she doesn’t seem able to resist it. Experiencing extreme guilt, she also attempts to ‘prove’ she is not the one who spread the disease by feeding on someone and trapping herself with him to wait and see if he will succumb. I would have to think she knew she would be proving herself to be a transmitter of the disease. What did you make of her character?

Ben: Yeah, I think I agree with everything you said. There’s clearly an idea of guilt (that’s again, kind of sexual in a way, as she has basically brought down the human race with these urges brought about by her unique tumor), but I concur that it’s not as well-developed as it could have been and often motivated by narrative convenience rather than psychological coherence. I do quite like the scene where she’s in the movie theater, however, and that creepy balding guy goes up to her and basically harasses her. The sly look that crosses over her face is very intriguing and enigmatic – at once curious, annoyed, and mischievous. We know what is going to happen to this obnoxious gentleman, and I think that awareness brings a strange mix of horror and amusement to the scene. More importantly, it feels like one of the few instances where Rose has autonomy over her dangerous new urges. While her first few infections/kills come off as rather primal and out of her control, in the theater scene you can sense her consciously planning to off her harasser in a way that she hasn’t before.

Alex: Yes, in that scene the disease empowers her rather than wears away at her. It’s a scene where she can exhibit self-control unlike in other places in the film, and its clear that she is aware that she is spreading the disease. Even so, I think Cronenberg finds a better balance with affliction and morality later in his career in The Fly where Seth’s moral dilemmas are deeply realized and weigh on audiences. Like you said though, Rabid definitely acts as an early precursor in Cronenberg’s career for the themes and social messages he would continue to explore in later films.